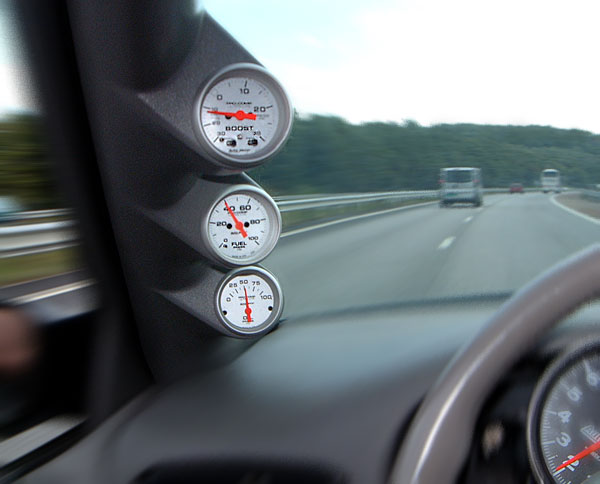 A smart place to have your instruments! In my case however, that doesn't mean that I really look at them.
Especially during a race! "OK Bostic, was the fuel pressure steady?" "Uhm...oh look over there, I think
the icecream man is coming!" 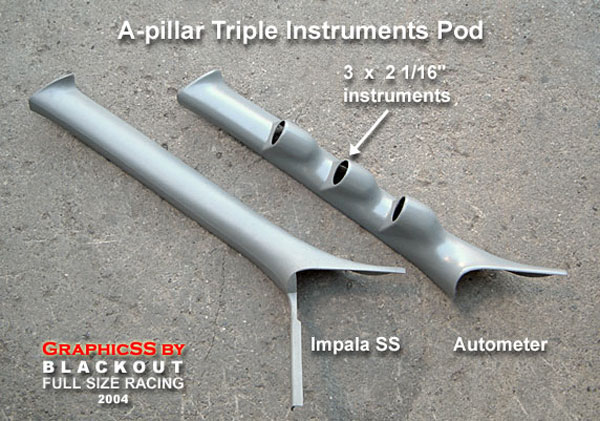 You mount the Autometer pod onto the original pod like a second skin. Securing is done by four small
plastic plugs into the small holes that you've drilled in each corner. Do not expect a high quality fit.
Anyway, I think this Autometer A-pillar pod is preferable for the instruments compared to the
alternative places which are...? NAISSO sells the pods: #Pod 3x2 and Summit too: #ATM-12231. 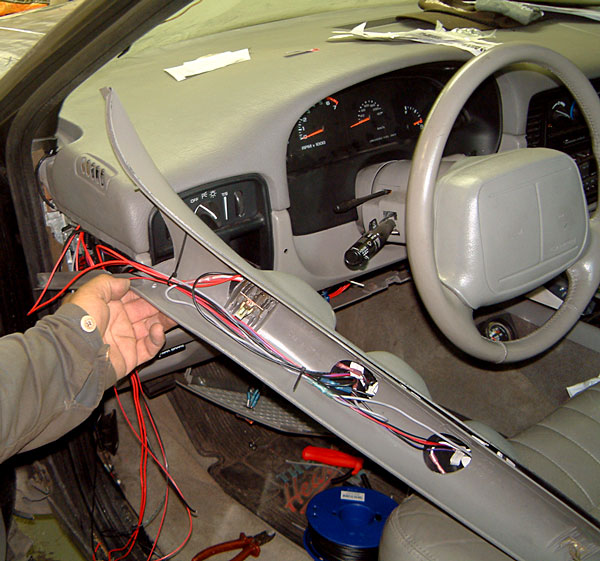 Big holes in the original pod let the wiring through. Note the Flintstones fit between the pods...
Anders "Nova" was the wiring wizard on this one. I had to take photos, answer the phone and
put on some damn good coffee.

Awaiting the day when the R&D is "over" - the day when it's time to think about the finish and
general appearance of the Blackout SS, carpets and mats bought from StreetTrends in
Carlsbad, California (see link at Friends). So, back into the boxes again... 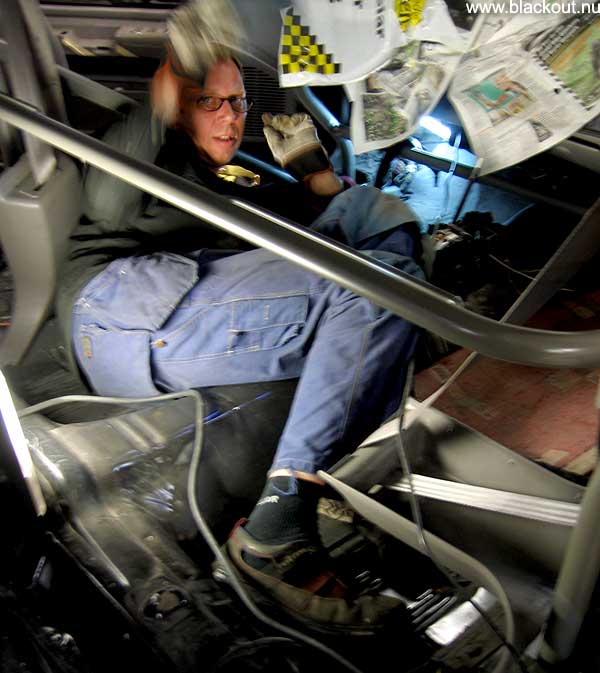 The Acrobat Welder Jonas Alholt who welded my new roll cage in the car. After that the interior had to
be changed a little bit. And it changed to the better! (more of the >ROLL CAGE build) 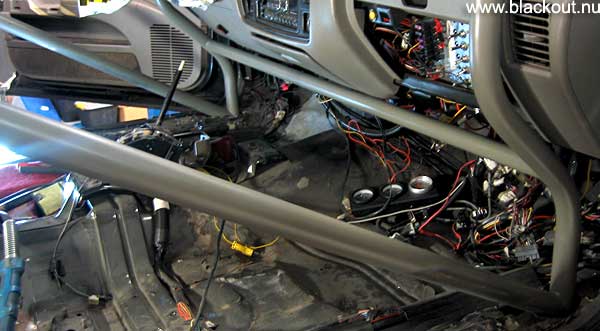 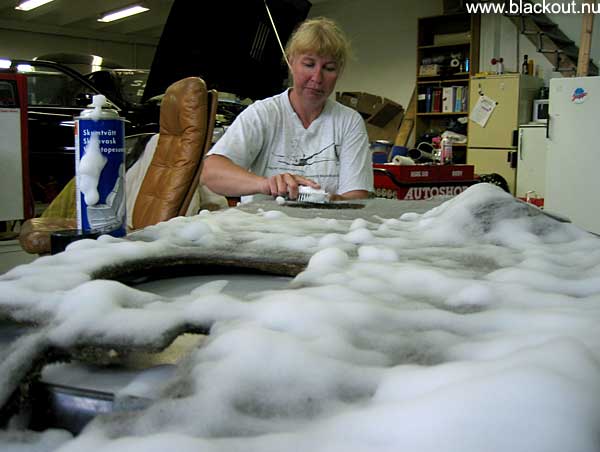 Agneta working hard to freshen up everything in the interior. The car has never been so fresh before! 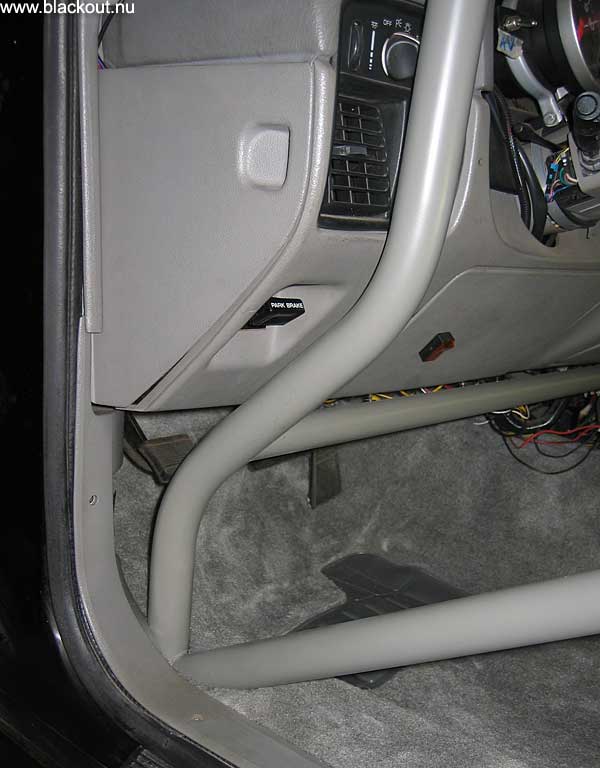 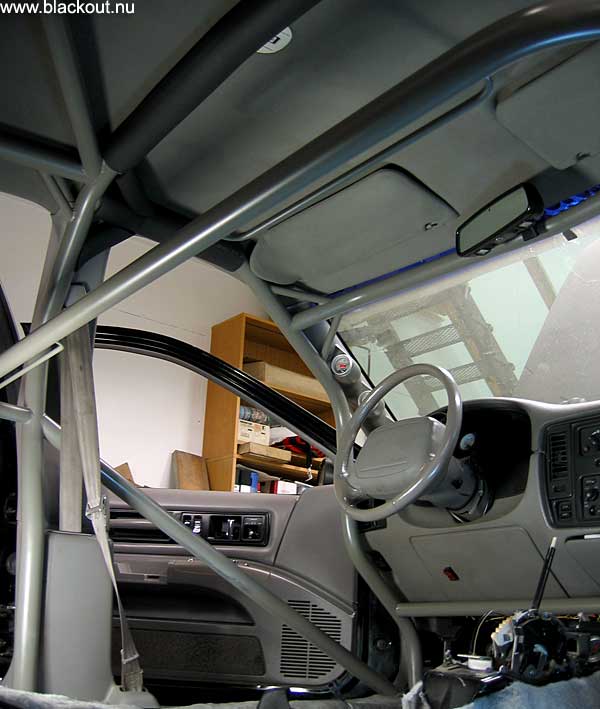 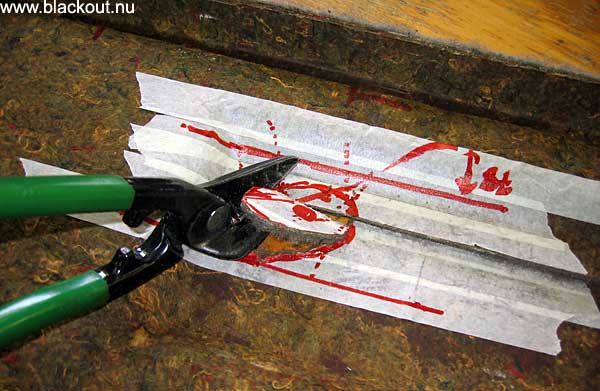 Terrible action with a lot of measuring before cutting in to the underneath of the textile cover of the
hat rack. You just do this once! But it turned out to be just wonderful! 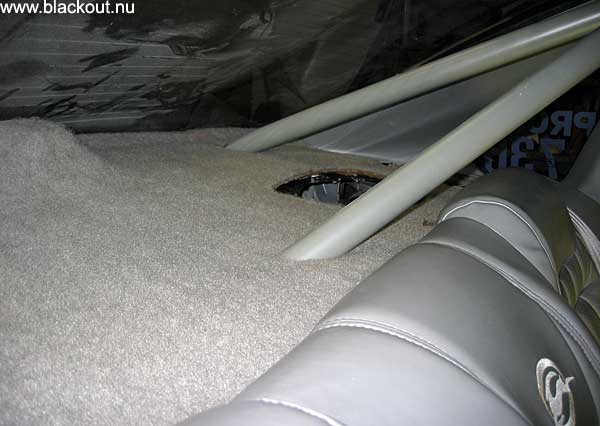 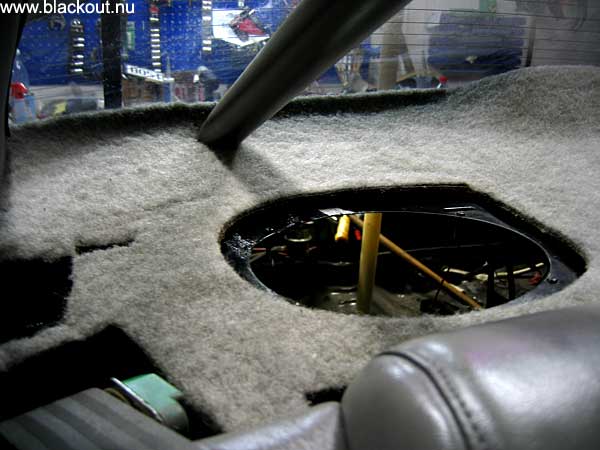 Wonderful! But hey Doug, I need those speaker covers real soon now! Don't send to Autoshop,
send to me directly! 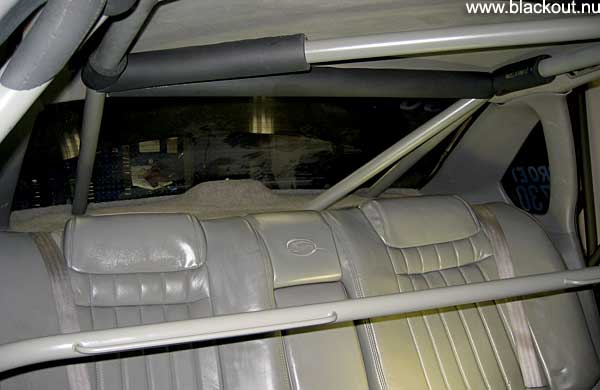 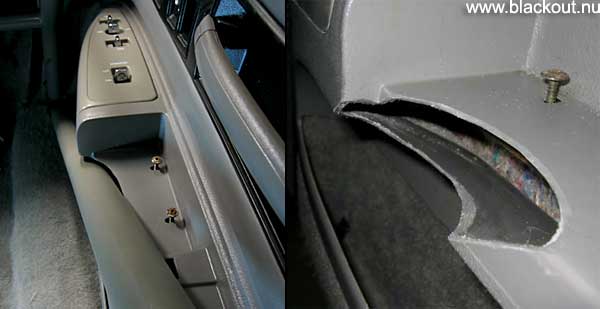 Terrific! I will modify the soft armrest padding later. 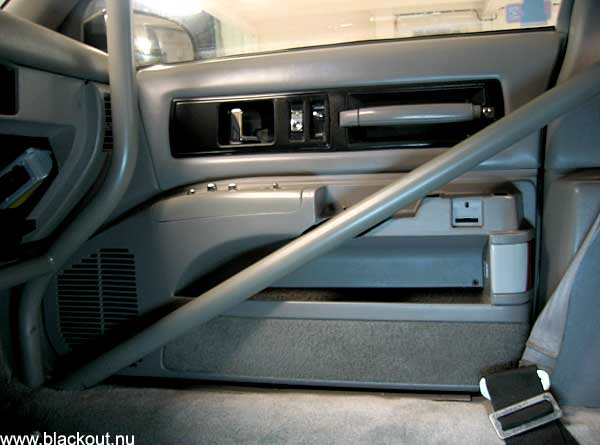 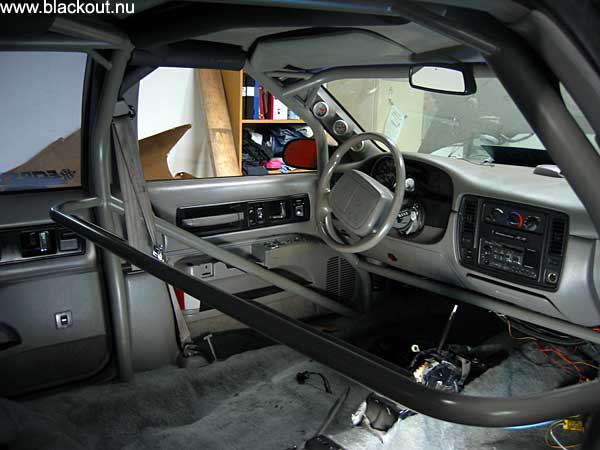 Consol going back in. I modified it to hide a lot of cables that irritated me before. I also made a small
hole to be able to have the EGT cable (exhaust gas temperature) coming straight up to the EGT-
instrument. This cable was just on the passenger side floor before. 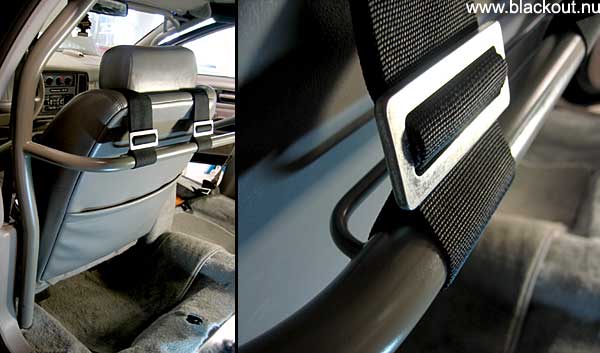 At last I could bring back driver's front seat and mount the safety belts in the cross bar. 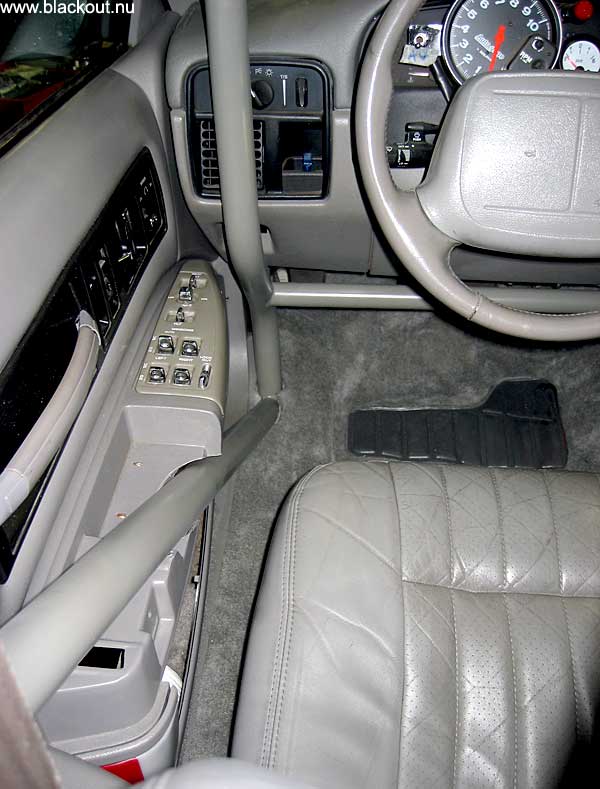 Good side clearence! Mmm, it feels so new and fresh! 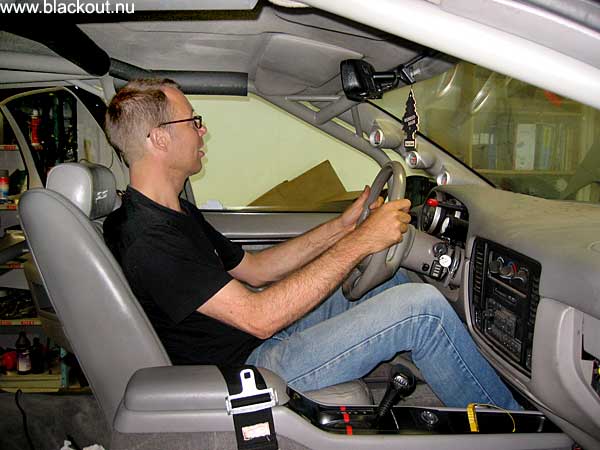 Who do you think was the first to sit again in the car?? "Move away" Jonas told me and entered in a
rarely seen jump. He liked it. And I think part of it is because he just came from a completely different
world in drag racing - lightweight and as lightweight as possible! That was the story with his Melmac
Mustang with twin turbo 289 which he just sold! Now he deals with this 2 ton - 4444 lb HEAVYWEIGHT!
I think he likes the contrast! But I've seen him begin to throw away washers from my Blackout SS!! 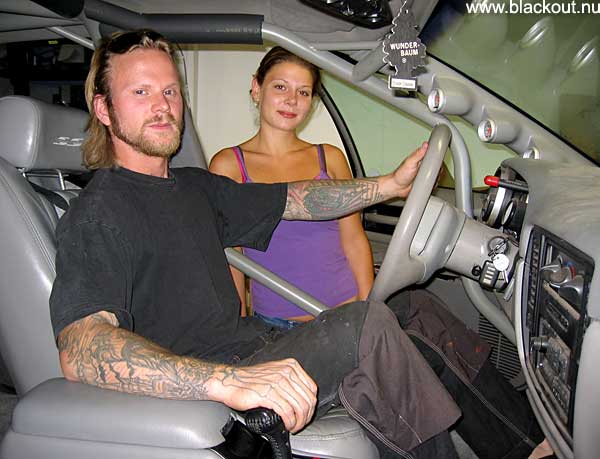 The big Sit-In has begun! Melle and Mona wanted to test out the new roll cage interior. 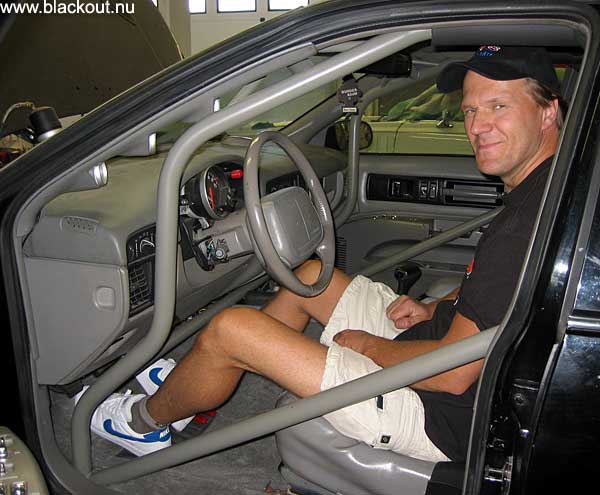 As did Mr Top Fuel Thore. Everybody like the caged interior and was also surpised by the SS comfort. 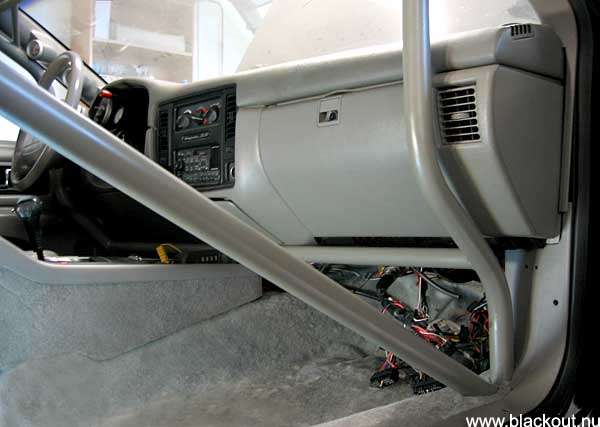 And at last the glove department lid is back in place after a couple of years on the shelf. All the
electrical wiring will dissapear when FAST-boxes are connected.

It's very tight between lid and roll cage, 1,5 mm, as expected. I was holding the tube right there when
Jonas welded it to the frame.

Some sharkbites to begin with! I'm working on the tube clearence in the door side pads. 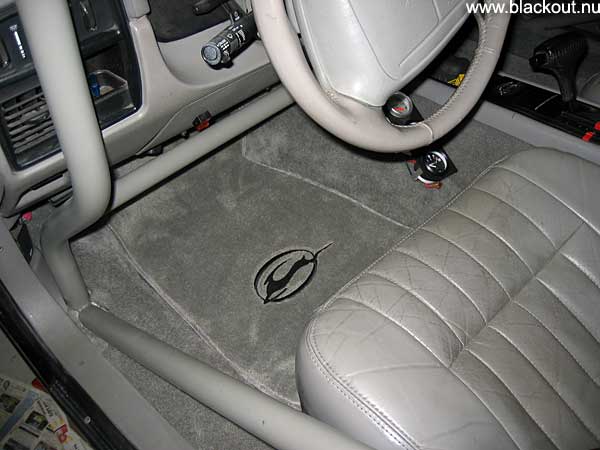 Nice with the new mats with deer logo. 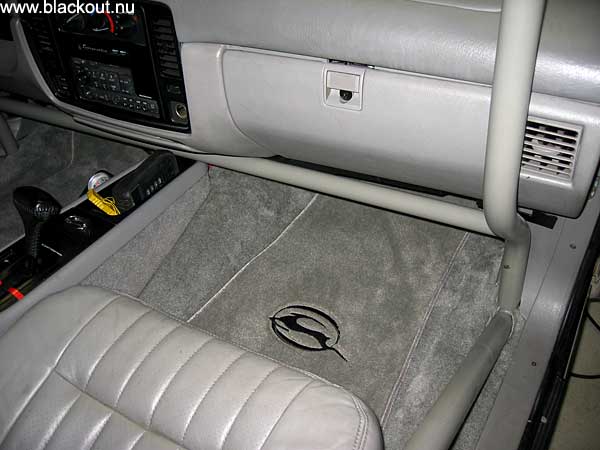 You can clearly see the difference in the grey tones in the interior in a flash picture like this.
I'm glad it's much better in real life. 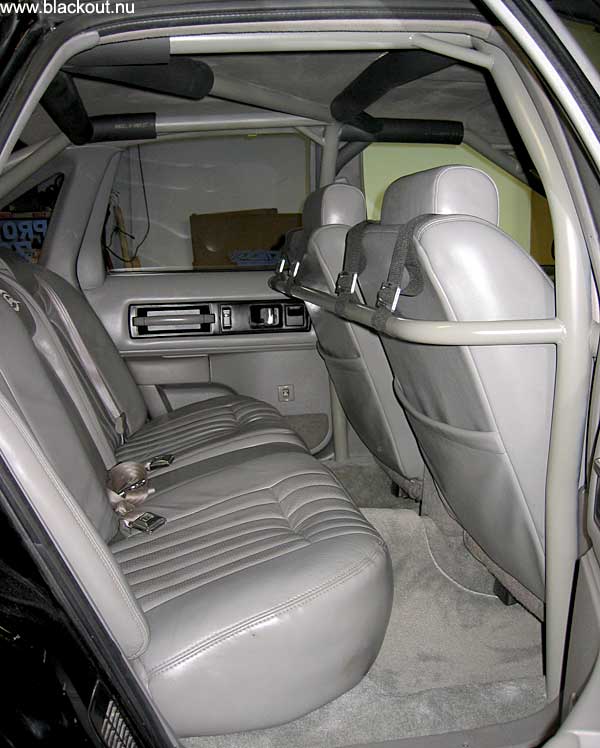 The back seat, where you can sit and drink beer and shout... 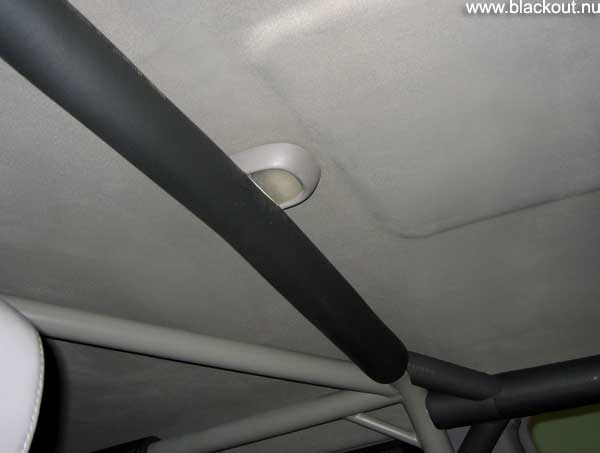 The dome light cover had to be cut even more this time to make it fit together with the main loop. Yep.