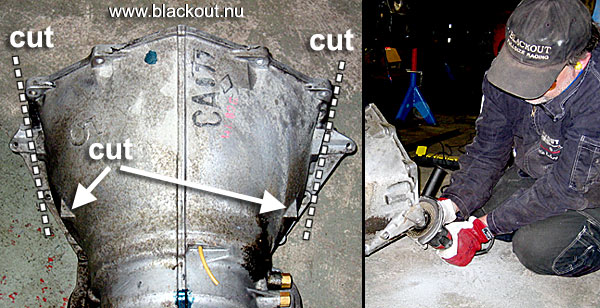 To fit the fatty 4L80E into the Impala SS tunnel means that you need to cut material here and there from
the transmission. Still it will be very tight. 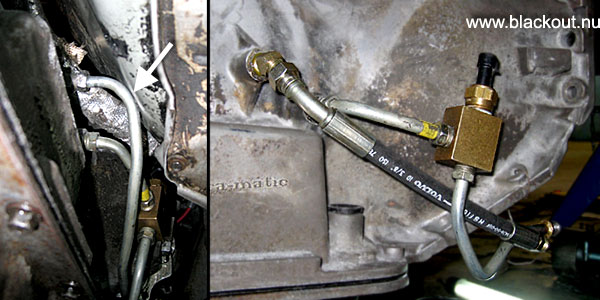 The 4L60E oil lines to the cooler just didn't fit underneath. It touched the tunnel long before the trans
was in place. The friends at Hydroscand provided me with a 135° + 135° solution with Volvo's top of the
line steel braided line with a rubber layer. 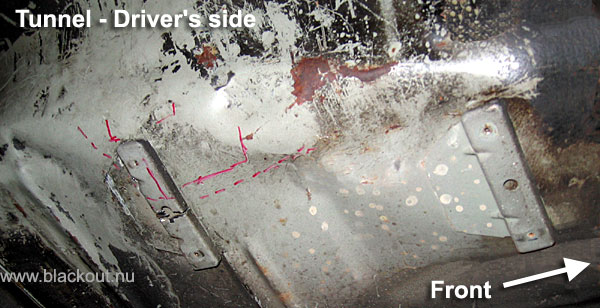 No it isn't a map over a junk yard - it's the Impala SS tunnel before the sledgehammer began to rebuild
it to make room for the longer, wider and higher transmission. Red marker lines show where the new
tunnel widening will be made, at the tightest spot.

Here's the tightest spot from another angle. Where the multi pin contact is located (passenger side on
a 4L60E). That aluminium cat heat shield had to be worked to give space. The F.A.S.T./TCI cable
harness couldn't be placed like this because it got squeezed to the tunnel top (!) when trans in right
position. There was a little better place for it further to the front of the gear box. Jeez, it's tight! 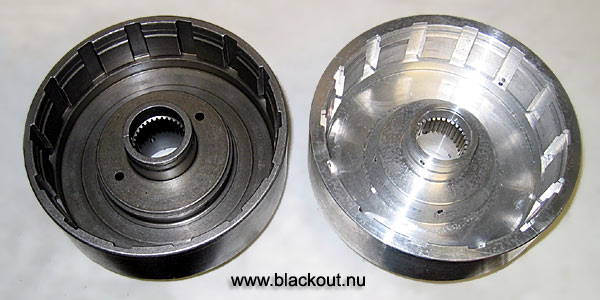 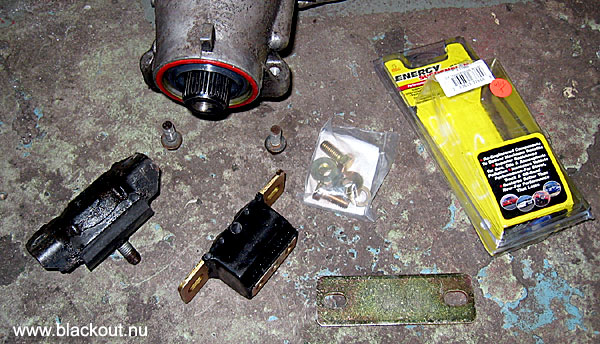 Feels good to get rid of the rubber mount for an Energy in polyrethane. 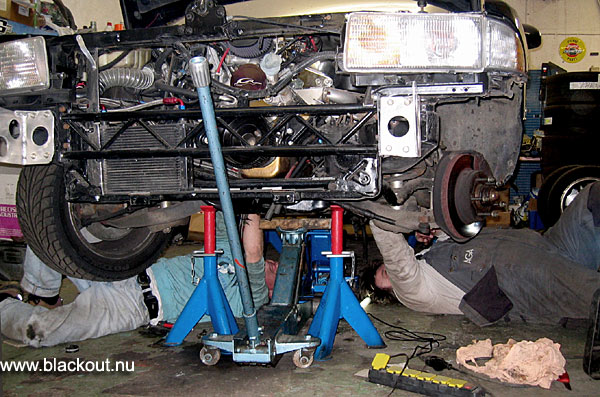 Anyway, working with that big transmission underneath the car and trying to squeeze it in ain't easy
even if you have helping hands, especially since it already was filled with the goodies and weighed 88 kg!
I was lucky to have Tony and Tommy! 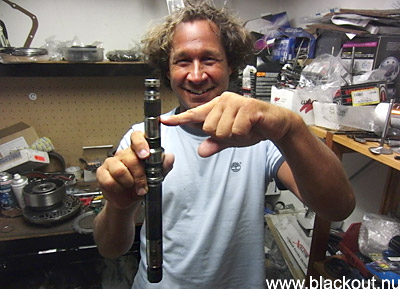 Lucky me that Mr Syclone Robert Pothorcki had a used one that I
could buy! It saves us a couple of weeks and some money too!?
"Tucken" at Danielssons Bil informed me that the input shaft was
broken in my 4L80E and the 2nd gear clutches was burnt.
A broken shaft explains why the acceleration stopped...
Robert points to the place where they "normally" break, in a
rectangular groove close to the splines. "It happened to me once too,
then I changed to the updated shaft with the round groove, and after
that I have had no problems with the 4L80E whatsoever, said Robert
who is very curious about my TH400 testing and thinks that "the
biggest difference between the transmissions is really the weight,
and the overdrive". 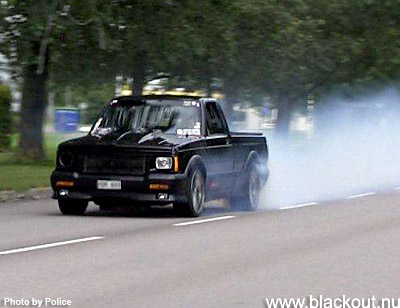 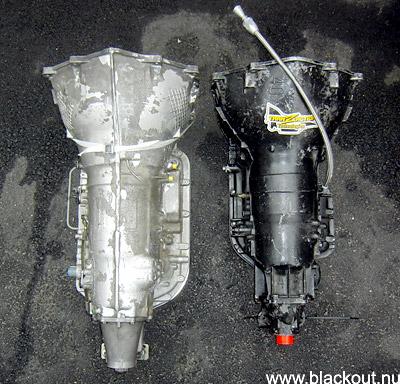 - Absolutely nothing, I don't understand your master's ways...
- I do, move along now!
I could lift the TH400 myself into a transport box and I wouldn't
even try that with the 4L80E. 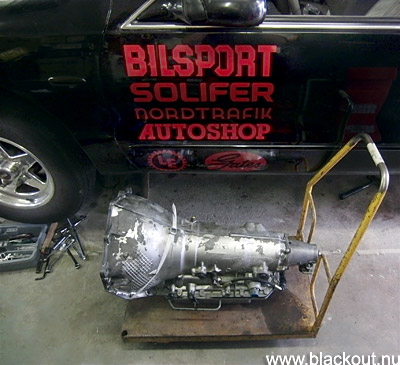 Too heavy for a straight skateboard transport, I had to use Agneta's
little Undermat trolly. Then the project stopped here as I understood
that I wouldn't have a chance to make the SS ready for race at
Moholmsstrippen this weekend. It's more work to do than mounting
the transmission. Maybe a test in Malmö on a Wednesday
night race instead? 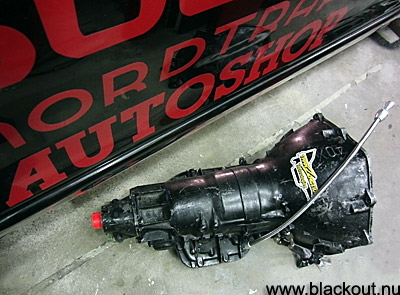 Out. It was really close! Sorry TH400 that I didn't get the chance to
test you with manual shiftings, transbrake and all that glory!
Your former daddy Karl Ellwein really wanted that to happen too!
Blaime your Edge converter and his strange sounds!
Now say hello to Kent and see to that he can have his first ever (!)
run with a good functioning transmission! Of course he have to order
a new converter, more suited for his weight-power configuration!
So, see you installed in Kent's Gentle Giant SS at "Night of Fire" at
Tierp Arena September 30 - October 1! 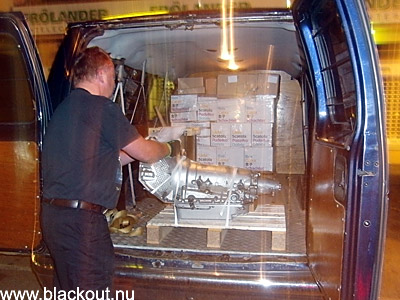 In. Welcome back Bad Boy 4L80E, after your luxurious spa and
health weeks at Danielssons Bil and Alexandra Engineering
in our capital city Stockholm!
Thanks all involved in the special transport! The informer Mikael
Hukka and Jörgen Johansson and AJ Transport for the service!
4L80E - now we hope that you can behave yourself! It was so
close that you were replaced by an much lighter, American
built TH400, manually shifted and with transbrake!
So...put out that cigar and stop smiling please,
it's still in Sweden... 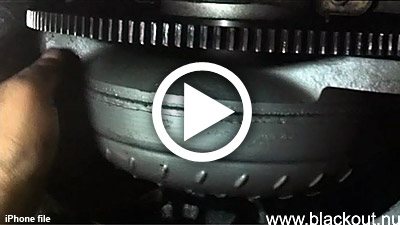 What the bloody xxxx is this sound from the Edge converter?
Well, I can't go to a race and load 1100 horses into it anyway,
without knowing what it is! Last user Karl don't know, he have never
heard it before and it was meant to be his reserve converter while
he was here himself racing in Europe. All other reactions among
the people I've asked are the same. No idea. Do you know?
So, instead of starting up and load our transport for the race at
Moholmsstrippen this weekend, I have to take it all out again!
The TH400 adventure is over for this time, before it started!
Thanks! :-(
Good news: My ordinary 4L80E and converter is repaired,
checked in dyno by Danielssons Bil and Alexandra Engineering
in Stockholm and is ready today, but will not be in time in
Gothenburg so I have a chance to race at Moholmstrippen!
That's racing! Or no racing!
Click image above to listen to the sound... 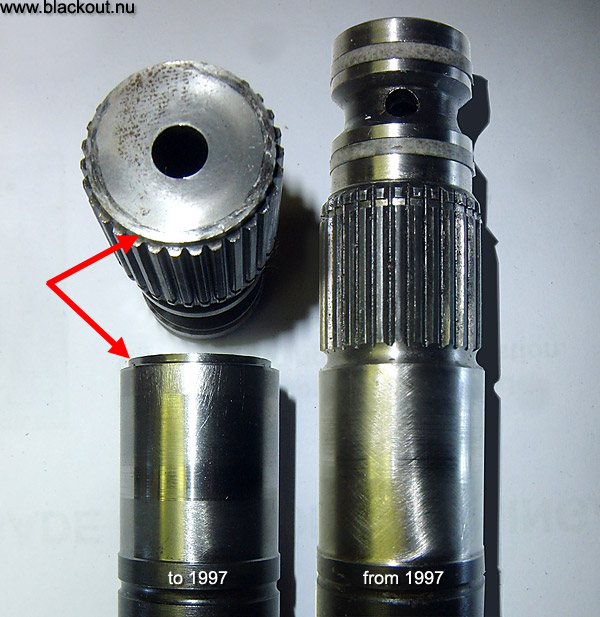 It's difficult to get a good ET with the


input shaft to the left! I did try at Tierp Arena last race but it
snapped just after second gear activated and it snapped at the "usual" place - the sharp profile you
see at the arrows. After that I've learned that there is an updated 4L80E input shaft with a round
profile which is said to manage the torque/weight better - the one to the right which now is mounted
in my transmission. I still think it's strange since the actual break is in the middle of the profile,
not in line with an edge? Anyway, I'm no expert and I'm happy that experts give a tip now and then.
And I've heard that there is an even stronger one...

Click this picture if you need a 1000 pix wide picture?
Comparison between my "old" input shaft and the new updated one that is recommended for people
who abuse their heavy Impalas on the dragstrip with a lot of torque. Another way to recognize the
newer input shaft is that the oil channel in the middle is going through
the axle, while the old just had that hole on one side. 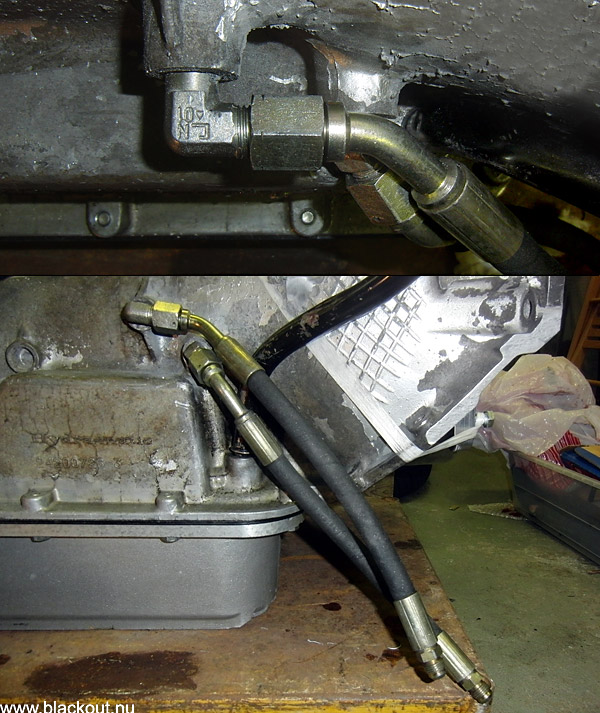 Two pictures to myself who from time to time always forget how these hoses are mounted. This is it!
More in album 2011-08-29 Thanks Anders for helping yourself through this website! :-)