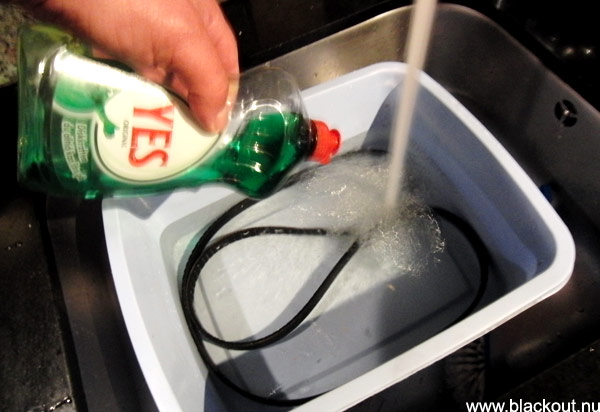 I've always known that good preparations make a good race and less problems... This time I even
washed the alternator belt from old oil and other contaminations. Since I have had a too low alternator
charge, below 12 V, I wanted to optimize the function of the belt. Zero slipping.
And, I think this belt was the only thing that didn't broke or gave us any problem during the next race... 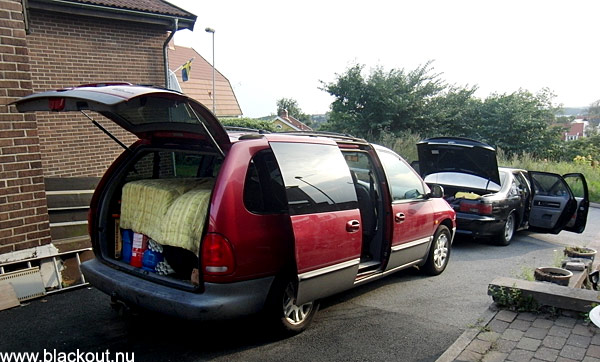 Both cars fully packed as usual so we shouldn't miss anything in the pit. 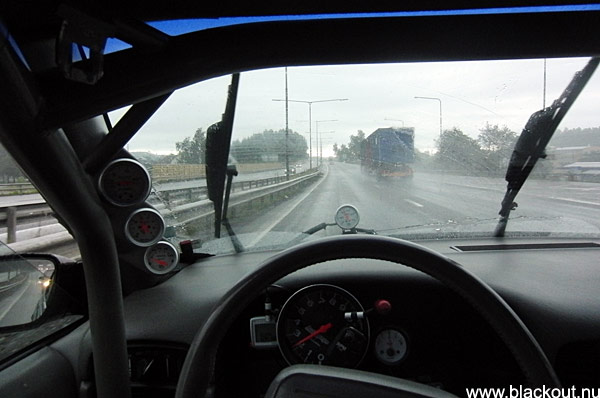 Legal car, cleared inspection and all. Boring drive though in weather like this. 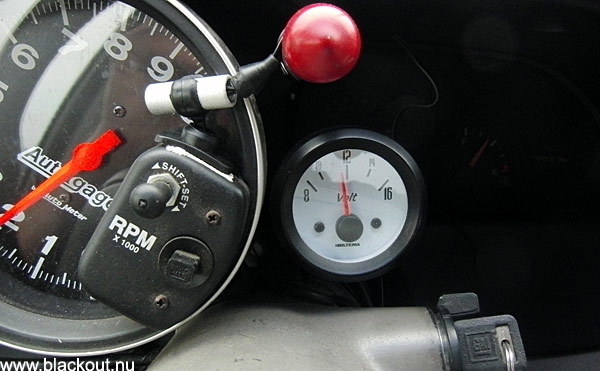 Still too low charge! It should be on a bit over 14 V here! But wise from the earlier race at Moholmen I
now at least had brought with me fully charged spare batteries. And the spare alternator! 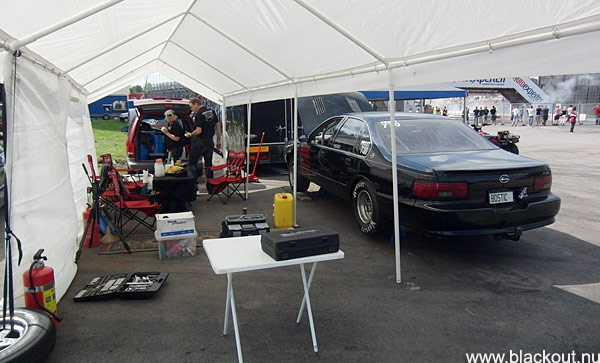 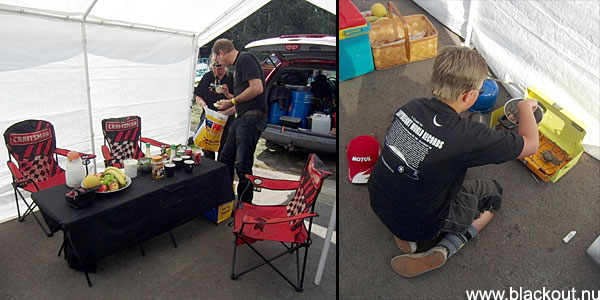 And that's because Agneta and Axel are working here to serve rest of the mankind with food and drinks. 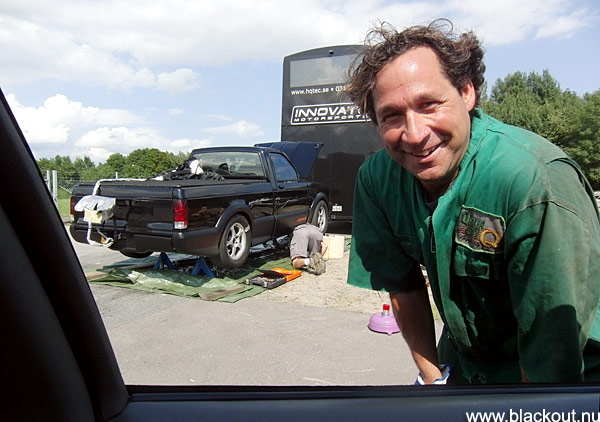 Always smiling! SycloneRobban totalled his V6 engine at Moholmsstrippen and built a completely new
one to this meet! He was lucky to find the last set in the world (?) of Oliver rods for this engine when he
called Mr X at Oliver. It feels like this is a full time job for Robert Pothorcki. 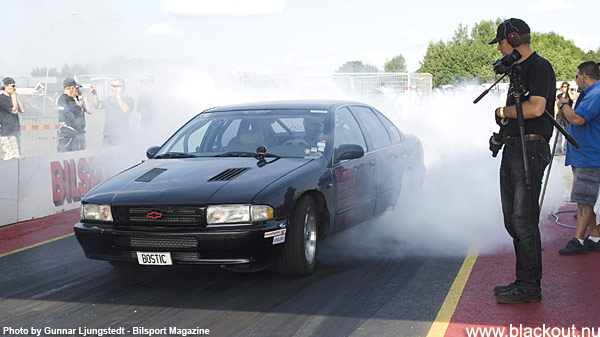 OK, will we get back to the 9's again? The car being in a much better shape and much better prepared
than when we last put down a string of 9's at Santa Pod...and this is the track and race to do it in
Sweden! Mantorp the weekend after their big FIA race, prepared for Top Fuel etc. 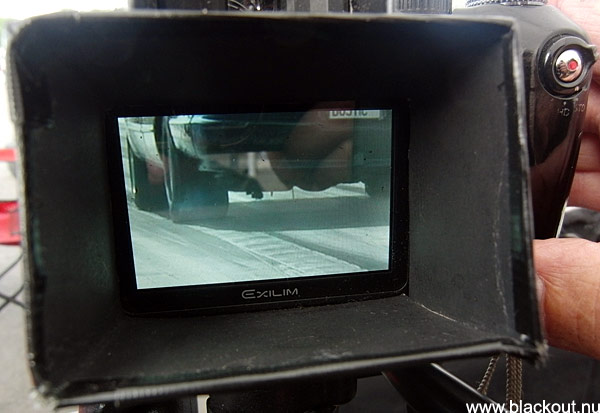 Nah...as Jonas is showing here frame by frame in his film clip, Blackout SS had serious problems
with tire shake! It hurt ET of course but I didn't feel anything of it inside this soft comfortable cruiser!
At the time of writing, ET and speed of this race are forgotten, but I know that 10.58 was the quickest. 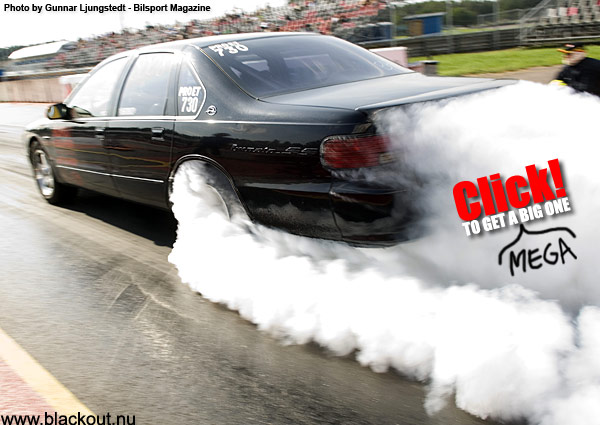 The Mother of all burnouts! Click on Gunnar Ljungstedt's fantastic picture to get a bigger one and take
a look on the details around the rear lamp! Thanks Gunnar for the shots! 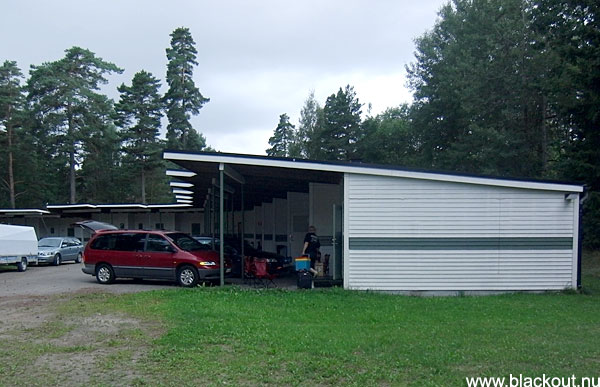 We spent the night at the famous Sjögestad Motel built in 1954. Possibly the oldest motel in Sweden!
It's renovated many times over the years but kept in its 50's shape! I stayed here first time in the late
70's! It's often fully booked since it's also the closest place to Mantorp! Book in time! 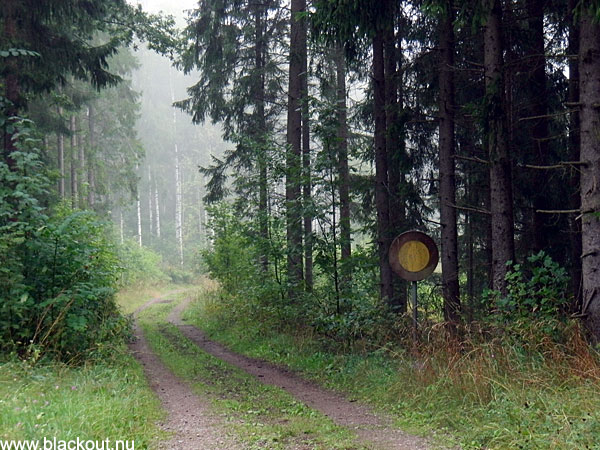 Behind the motel you'll find the old Gallows Hill. At least it was some 150 years ago. 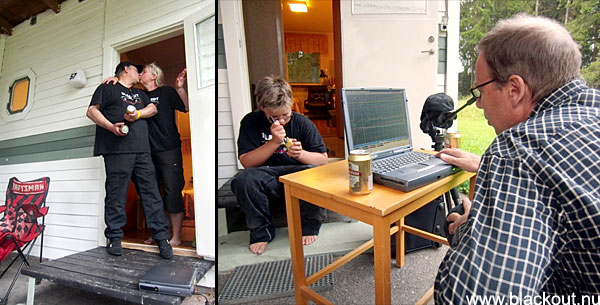 A quiet romantic place in the woods. A couple of cold beer doesn't make it worse. Checking the log
from todays' runs. Suddenly Jonas saw a wild boar running across the small dirt road in the back! 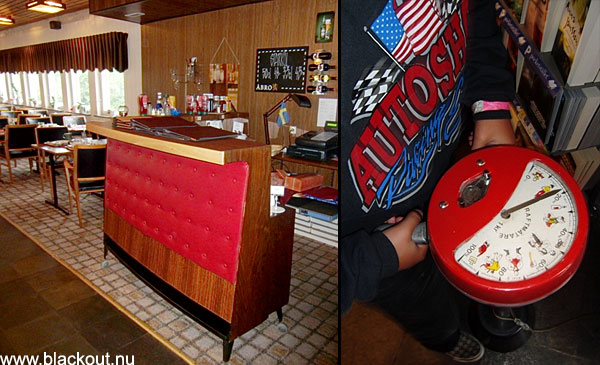 Also the restaurant is still in its 50's and 60's! Vinyl-coated bar and a classic "Kraftmätare" or in English
"Test Your Strength" which feeds on Swedish 1 Krona and the result of your effort goes from "infant" to
"maiden" and "drunkard", "clerk", "half-strong", "ladies' man", "lumber jack", "atlethe", "fighter" to
"world champion". 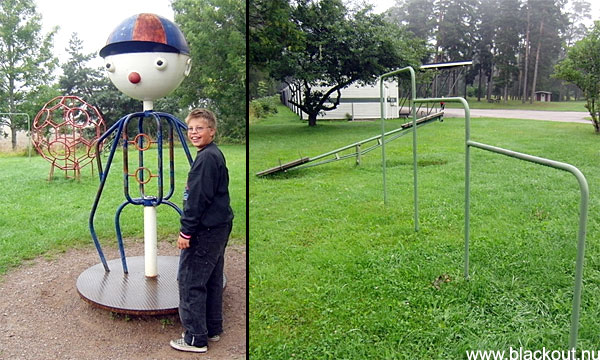 More old stuff in the playground. I have never seen that Jockey before but I do remember well that
"ramble" bar in three levels and I remember that I could only go to level 3 bar via level 2. Remember? 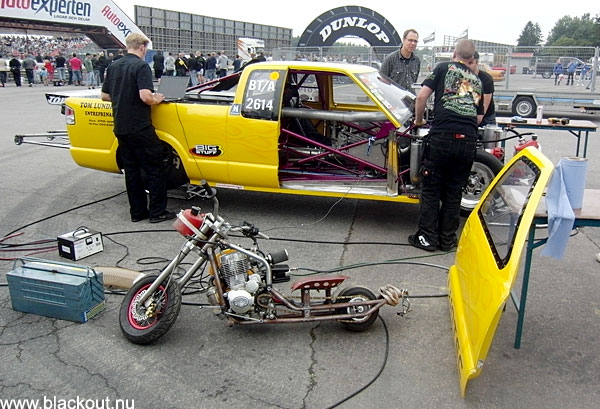 And here's level 3 at the big playground! Martin Lundqvist and his fabulous Chevrolet S10 truck!
A masterpiece to take a close look at! He was here to get test runs. 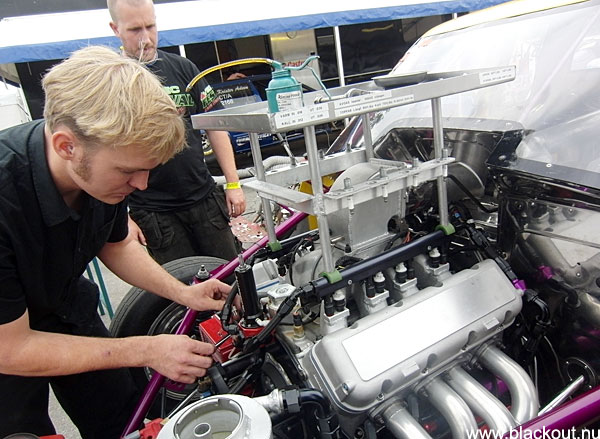 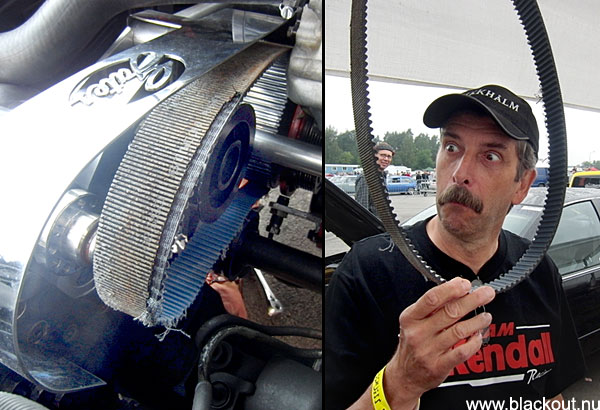 After my first run. WHAAAT!? Was this problem back again? I haven't broken a blower belt in years,
never since Gates marketed this patented "twistable" carbon fiber belt! I guess after a couple of years
hard runs it had to let go!? And it was a good record for that belt anyway! Our friend Ståkkhålms-Kjelle
was as stunned as we were. During another run, the 4" induction tube blew out from the silicone in the
under hood joint for the very first time! POFF! A new sound so I had no idea of what that could be until
the next second when I felt that I had only a few hundred horse! Jeezus, we are testing everything now! 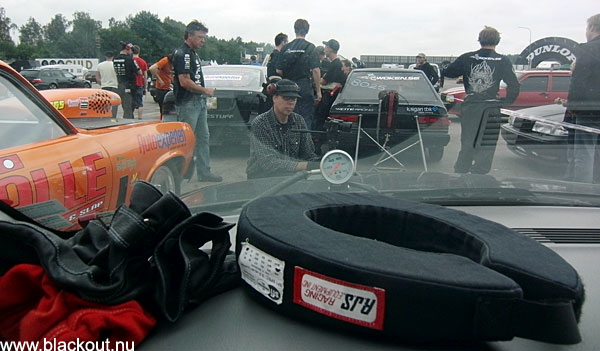 New belt. And everything overlooked again. Tighten some nuts and bolts. But little did we know that
next run would expose half a dozen problems...new and old!

Halfway down the strip the sound from Hell opened up! For a split second I believed a rod came out but
car still ran to finishline and beyond and was waved in by the officials. Was the exhaust system...gone?
I shut it down. Boiling water was spewing out! Head gasket? 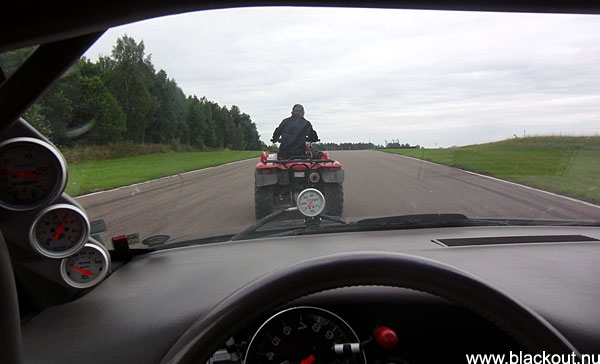 I got towed by a very kind guy, Fredrik Sjöqvist, who also is the Business Area Manager at FABAS,
that is Förlags AB Albinsson & Sjöberg which is the largest motor magazine publishing house within
the Nordic countries. And Bilsport Magazine is their Crown Jewel! It's nice to see how all members of
the big publishing family FABAS pitch in at their own events and help out. And I'm sure it's not only
to save money to do the work themselves, it's more to keep the contact with their readers. 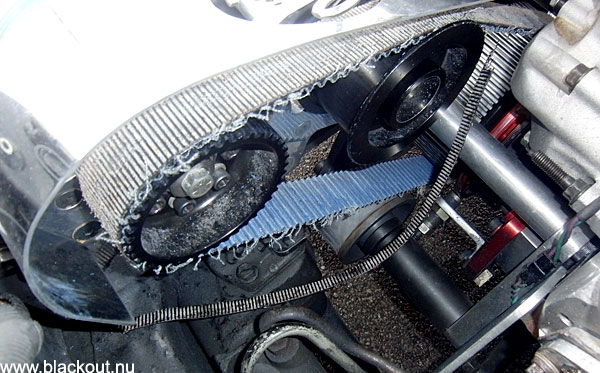 Again! What the ****!!!! This was not a one-off problem! The only thing that has changed from before
is that this blower has been renovated by ProCharger and they changed the inner gear ratio from 5.0:1
to 5.4:1 and that meant a big difference for my belts! The whole difference! It must be changed back. 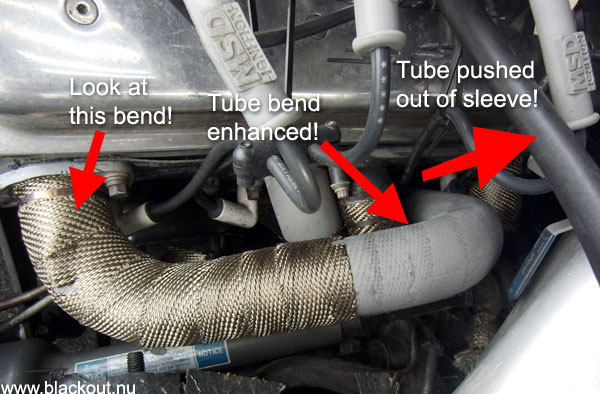 Another unbelievable - but typical - Blackout feature! Because, have you ever before heard about a
header tube which twisted in two places and came off in the sleeve? So suddenly I had ONE open tube
under the hood, and it really sounded loud and trashy! Reasons: too hot (glowing) tubes, full exhaust
system with mufflers building enough back pressure to actually bend the tube! Freakin' thing to happen!
And I just hate when more than one thing happens at the same time! Now I got overheating, belt
breakage, bent/opened header tube in one run! And still the battery is not charging as it should be...
Jonas took the tube and gave it some good poundings so it barely could connect with the rest of the
exhaust system again, so I could drive it home carefully. 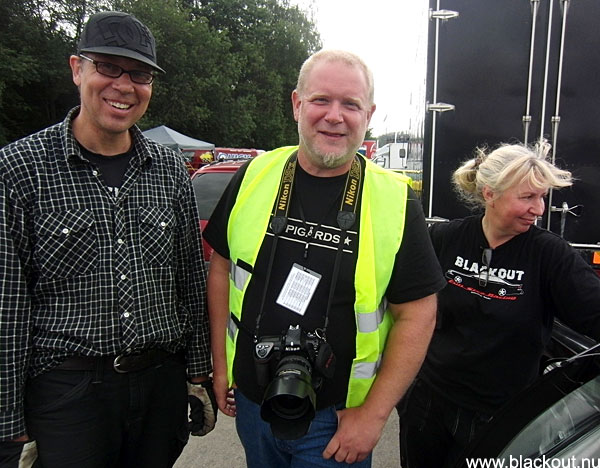 Keep smiling even if you are crying. Especially when you get honorable guests like Gunnar Ljungstedt.
Let's pack and go home. 10.58 was our best result in between the attacks from the underworld... 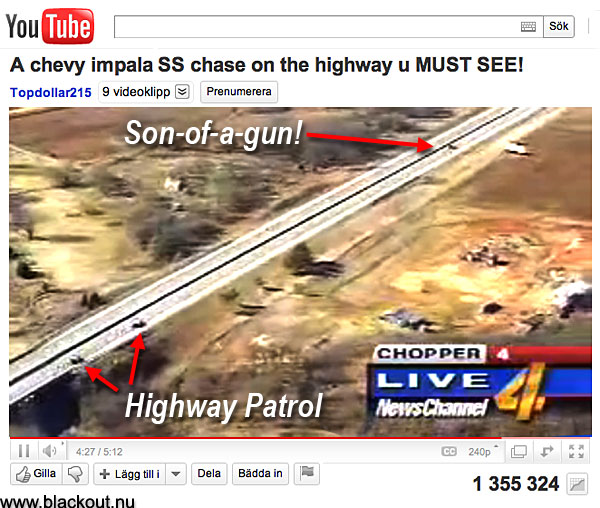 Even if I was driving the SS carefully back home it still was sounding TOO much so I just reached the
motorway when the highway patrol stopped me. When I was signing the ticket of 1200 SEK I was
thinking of the scene in this clip... www.youtube.com/Impala SS highway chase 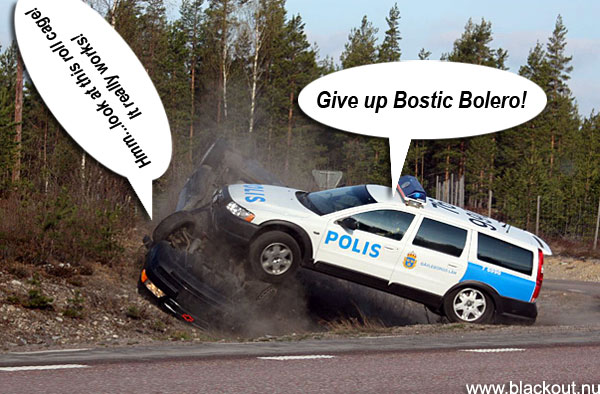 I don't have any pictures from when the Police stopped us but I guess it looked like this... 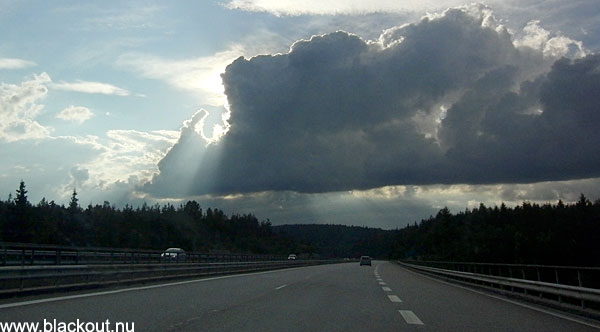 On the road back home I had a good time thinking over our Destiny. What will the Future look like?
Can I influence it at all? These miles were slow. Too much accelerator the tube opened and it was
TOO LOUD! Then let off the accelerator a bit and the tube shut. Mile after mile. 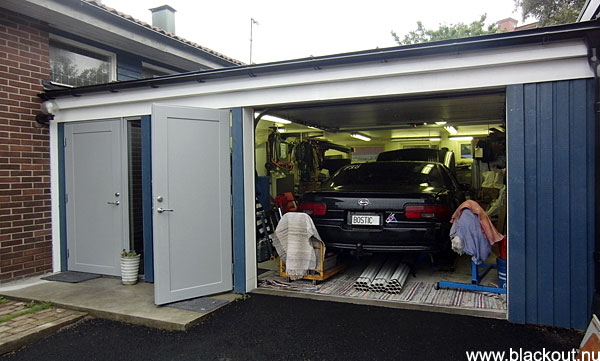 Pack it in and forget it. Next day I was going abroad in work. Will I have time and lust to fix everything
to be able to race at Moholmsstrippen, the last race of the year? If so, I needed to fix everything in
another way as the normal help already have had enough and said "No thanks" before I even asked.
Tough times. 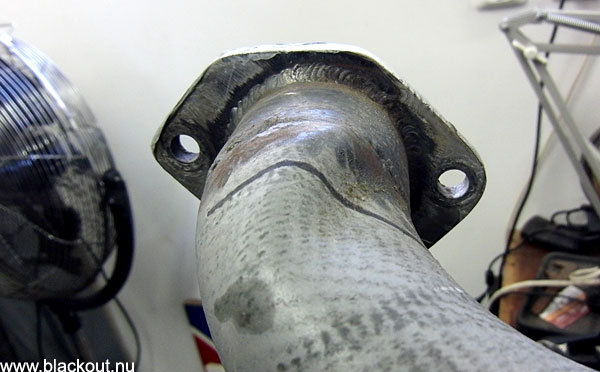 This twisted tube was one of many things that had to be fixed in a short while if I would like to go to
one more race this year...and I wasn't sure if that interested me. A lot of work at my company
needed me to focus on other issues. And things like twisted tubes doesn't fix themselves...