This time it worked. And it was no luck about it. It was a distinct team effort
by the best men in the country. And in the USA. And I was happy to be
in the middle of it! First we had to find the missing Reverse-gear... 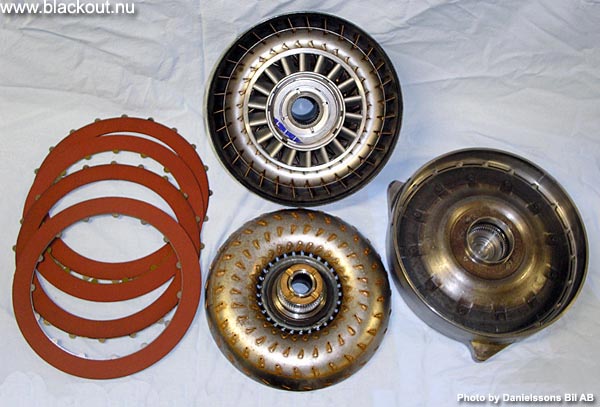 This is the kit that Tony Jönsson at Danielssons bil made my "new" converter out of, new clutches from
Vigilante (have no idea why it's called 5-clutch, I see only four). Turbine with same 082 stator and new
race (marked blue here). To the right the special Vigilante front cover which holds the clutches.
And in the middle the new No 4 pump.

Then all this stuff was put together and welded by an half-automatic ATI converter welder.

Many expensive ATI machines at Danielssons Bil. A leakage tester where Tony put in 4 kg of air to see
that everything's welded OK. Then the balancer of course. 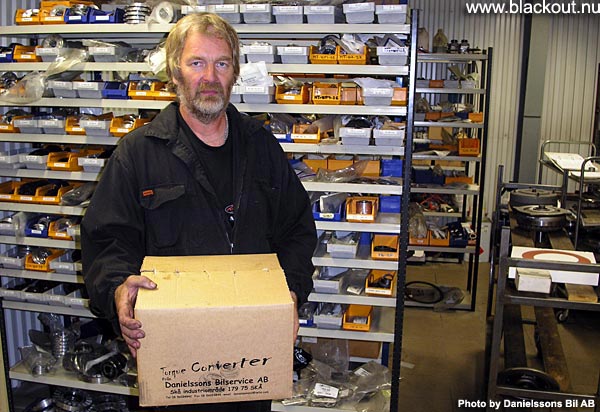 Guru himself, Tony Jönsson. Long time dragracer who once teamed with Anders Lantz and raced their
infamous '33 Plymouth coupe! Tony still has it, check it out at their site: Danielssons Bil / Gallery. 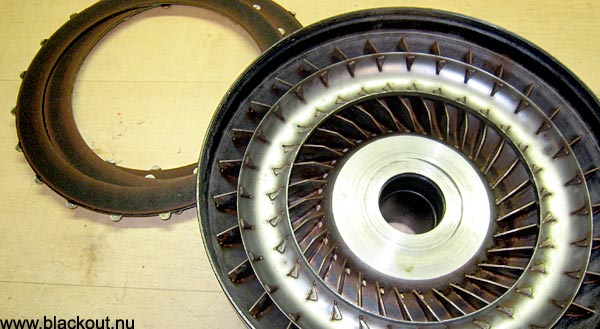 Broken 5 clutches (lock up) and No 6 pump of my Vigilante which couldn't hold the power so we went
two steps tighter, not to No 0 (zero) but No 4. They say No 3 (even tighter, there is no logic in the
numbers!) ) is only "for the nitrous guys". Ok...? Clutches are both steel and material and besides
becoming dark the steel have become un-flat of the heat over the years on lock-up. 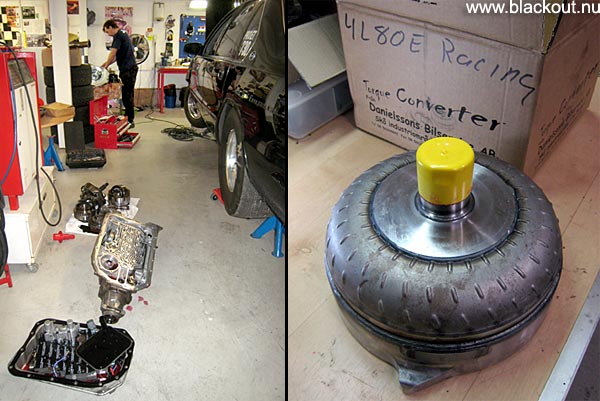 Both Kenneth Ståhl from Custom Racing in Örebro and the converter from Tony at Danielssons Bil in
Ekerö arrived on Friday. Ha, great timing for once! Kenneth disassembled BOTH my 4L80E trans-
missions and started to compare things. Now I was really nervous about all the spread around things. 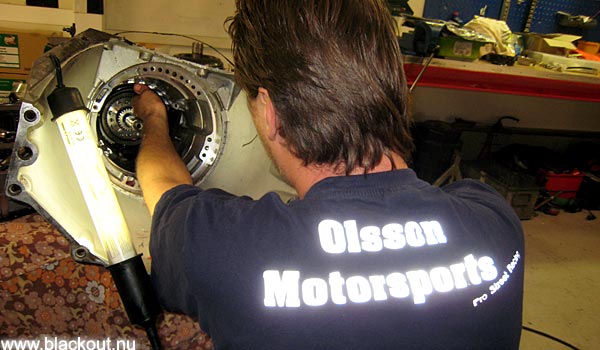 Kenneth showed - unknowingly - that he has worked hundreds of transmissions before by very quickly
taking the 4L80E's apart and simply stacking the things in one big unsorted pile of - I don't know!
I guess my fear of automatic transmissions almost disappeared this night. Also really cool t-shirts with
reflecting logo which his friend Daniel Olsson has made!

The reverse gear assembly was of course the main target for the troubleshooting, or let's say the look for
something broken. And yes, the band was broken all right, but not worn! Even if the "Heavy Duty" text
still can be seen the band is an ex-band due to severe heat! Cracks all over. This happened when
testing the transbrake the first time and the brake couldn't hold it. But why?

This is why! Kenneth finally found the origin of our problem! These steel "bullets" holding the brake band
are 1 mm too far into the aluminium house, which was found out when comparing them in my back up
transmission where they were flush with the house. The alignment of my thicker heavy duty brake
band becomes too tight compared to my "normal looking" thinner Raybestos band from the back up.

So whomever at GM or TCI that assembled this had problems to get the servo pin to fit, and therefore
grinded it down. The pin to the right is from my back up with the thinner band. Actually I have no idea
what I'm writing about...but I'm still going...I'm just trying to refer the things I've heard...

Burned band to the right where you also can see that the ugly pin has grinded some material off.
To the left a Borg Warner band which didn't fit either because it was too thick. So what Kenneth did
was assembling the band and pin from my back up, and they fitted right in! 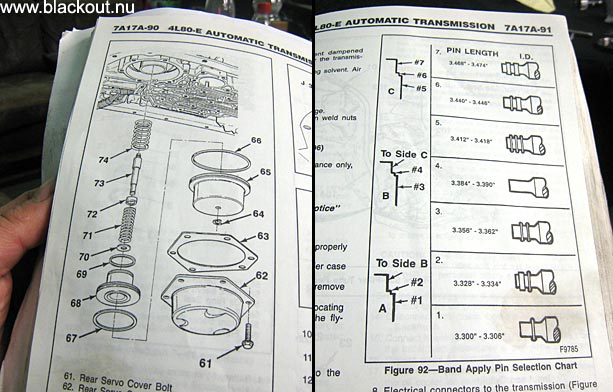 There are several pin lengths to choose from when working with e.g. TH400 or 4L80E, but it shouldn't be
necessary when fitted once. Until you mount a thicker or thinner band...well, I don't know, really... I'm still
on the scary side on automatics, I honestly don't want to know anything, I just want it to work.
It's like a whole car of knowledge for me. 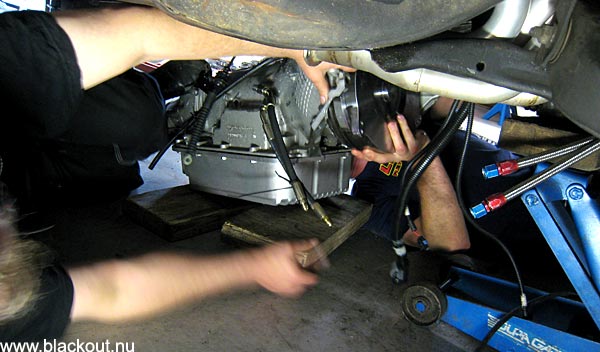 Me and Kenneth building a pile of plank pieces under the transmission first, to be able to get the jack in
under there. Don't know if you all do like this, but Agneta and I "invented" it one night under here. =)

Mr Al Holt arrived Saturday and was not only taking pictures of me. He was very curious of what
Kenneth had found out and then he worked hard with us all day. He didn't want to miss anything.

This time we added a pressure line with a quick coupler so we could read line pressure on all gears. 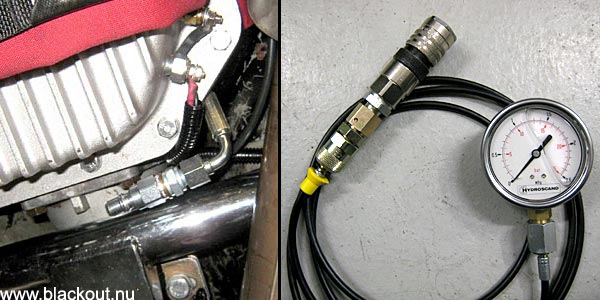 It's mounted permanently so I can check if pressure is OK in all gears anytime. I just have to plug it in
and start the engine. Instrument shows up to 25 BAR, that's enough since I had 21 BAR on transbrake.
Thanks Hydroscand! For the driving on the open road I've made a condom of a piece of a bicycle
rubber hose, strapped onto the the coupler, and it will protect against all rain and stones and frogs. 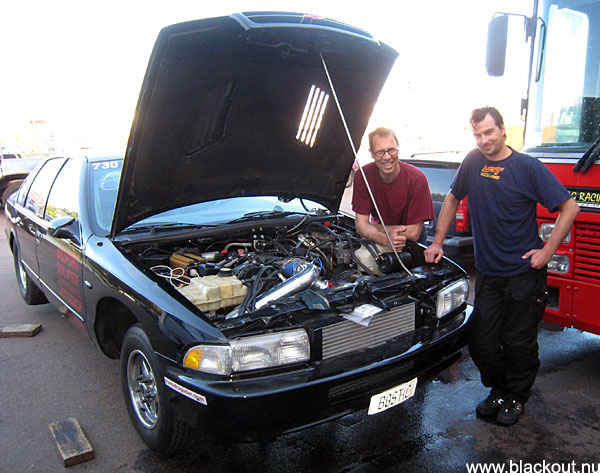 "It's nice with a smoke afterwards..."
The minutes after we made the perfect test of the transbrake. We were prepared for the worst but we
hoped for the best which happened! First we did it without blower and found out that the "new" converter
indeed was tighter than last time, now only 2700 RPM compared to earlier 3800 RPM on full throttle.
With blower hooked it went to 5500 RPM with the pedal to the metal. I felt it could do a couple of
more hundreds but I was unable to keep the foot to the floor, I lifted because of the whole experience!
But I know I won't lift anything at the dragstrip when I'm strapped in and everything!
And IF it turns out that the RPM will reach the shifting point at 6200 RPM I will certainly activate the
Launch Control in my MSD, at 5500 RPM.
I've learned so much from these smiling guys, who also are happy to see that their theories work.
Jonas Alholt and Kenneth Ståhl - you are my heroes. Thanks!

Good boy Blackout SS!
Crew Chief Agneta said NO to further testing - on the street! She overlooked our first test of the
transbrake when we shot the transmission to our memory and refused to overlook this second test.
The expensive ferry to UK was already paid for, you see, and she does NOT AT ALL see the charm of
a transbrake...because it's of course a threat to all moving parts in a heavy car like this!
However, I called her directly after the test with the good news and she ordered me very determined:
-Great, but now you check that there's a reverse and then drive it into the garage straight
away. NO FOOLING AROUND ON THE STREET! Understood?
-Yes yes dear, but now...eh...
-Because now we're going to England on Saturday. Hear?
-Yes, love you!
-U2. (click)
You who have followed our adventures over the years know how many times she and Axel have been
standing there in the chaos, seeing our racing plans being destroyed during "just a last test"... 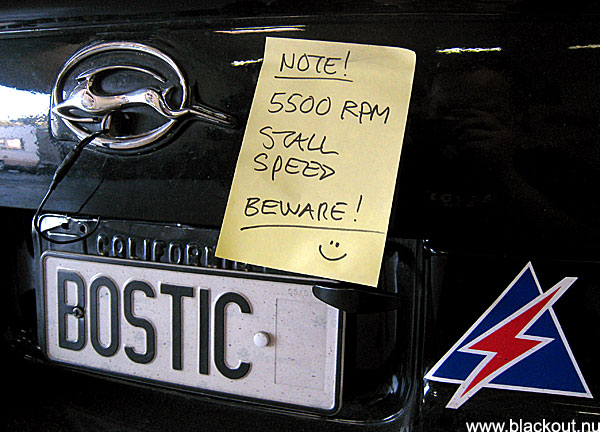 Message to the Thriller Pro Mod guys in the garage. And to you.