Tommy's high profile Cadillac wheels lifted up the transmission oil tray and rear cross member at least
an inch from the ground. Good, now we can drive aboard the ferry.

Ready to go. - Bye bye Grandpa, you can follow us every day at >Pit Lane, said Axel. Agneta's parents
Thore and Sonia are two important website visitors for whom we also make this blackout.nu

What to do with three (3!) hours of waiting from checking in to entering the Gothenburg Docks? Agneta
was knitting (on my new underwear) while Axel played his GameBoy, talked to mum on the walkie-talkie
and checked other racers arriving. Leif Adreasson's Swedish Armed Forces truck and trailer with his Top
Methanol Funny Car was however on the way to the ferry for Immingham which is only a 24 hour tour.
Our ferry to Tilbury (London) is 37 hours...but when in UK offers a shorter drive to Santa Pod.

When finally inside it was another hour waiting before we could board the Ark Forwarder. Axel was
invited by a nice truckdriver to ride along in this tug master which carries containers. Big big smiles! 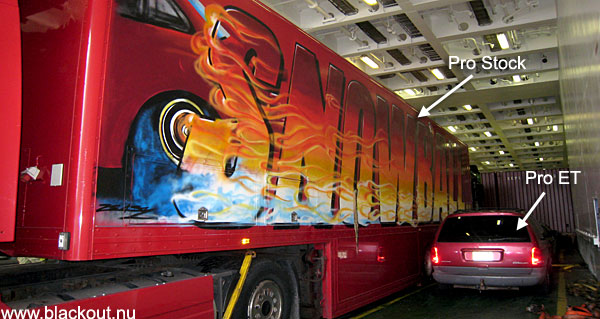 The difference: about 3 seconds ET.

Horay what a happy party! Ark Forwarder was equipped with DVD-player and a lot of movies - with
polish sub titles or dubbed in polish! Not especially entertaining actually. Meanwhile the Polish crew
enjoyed loud satellite TV in their salon next door! Dobro!


SUNDAY September 2
Another day at sea...

The extremely luxurious mess and kitchenette.

Help yourself around the clock. What else do you need? Beer? Nah..is it really necessary? 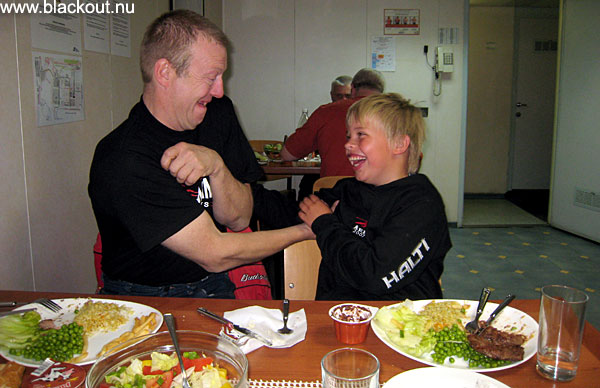 Pro Stock professional Janne "Snowball" Palmqvist and kid professional Axel Envall found each other
on this trip and we now have got a new favourite to cheer in Pro Stock. 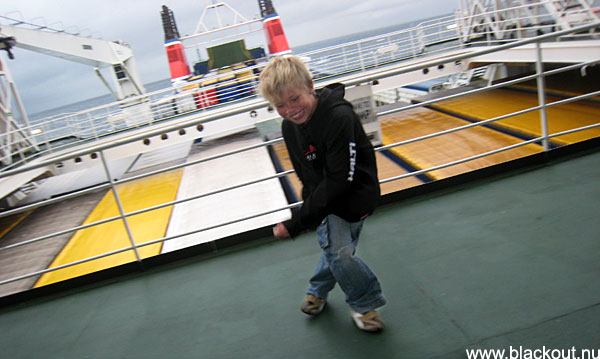 Especially fun was trying to walk straight when the waves got bigger. (Then we didn't know what was
going to happen on our return trip home, "fun" is not the right word at all...) 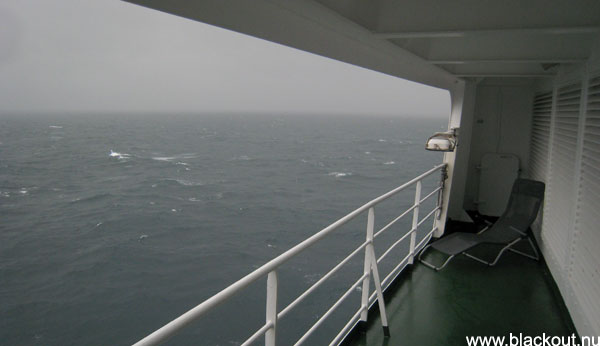 The ship even provides a deckschair for your sun bath. 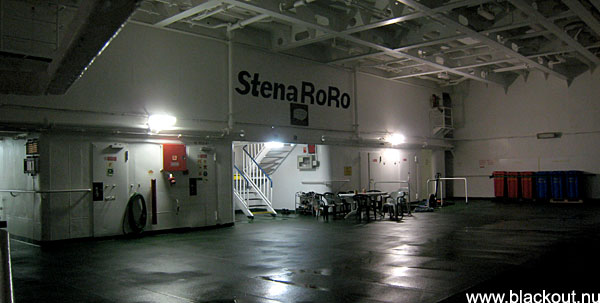 The outdoor seating concept. Smokers allowed! I guess I'm The Last Smoking Idiot in The World? 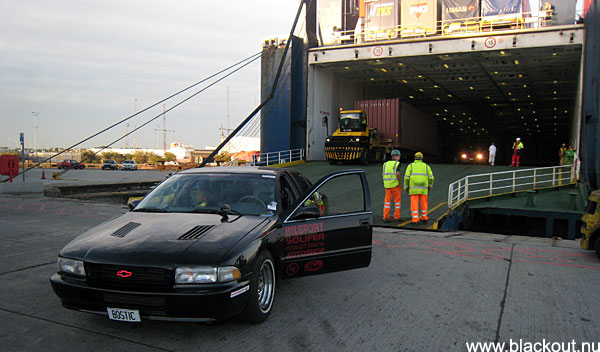 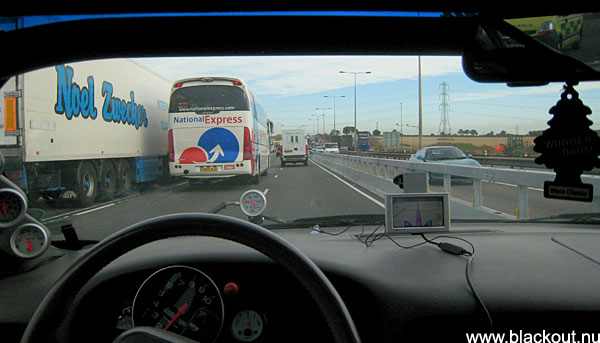 GPS - Go Perfect System. Impressed every time. She was nice, the lady who talked to me out
of that little box, and she must've been driving the M25 and M1 a lot herself!

YEA! When we stopped for breakfast more than halfways to Santa Pod we were really happy to be here.
We did it, again, and we then enjoyed every mile of England and its beautiful towns and small villages.

Before going the last few miles to the Santa Pod track it's tradition to stop at Tesco in Wellingborough
to supply. It was nice to see Tommy's wheels at Tesco's parking. Car wash is also a tradition.

Once again Blackout SS was approaching the Santa Pod gates. "Hello Podden, what will you
have for us this time?" The GPS lady said "Ankommer målet" (Arriving target)

Home again! The pit. Stopped at Top Fuel Thore who was working the clutch while the others were at
Tesco. Half the OFAB Thriller team already came here and had some test runs during the Test
Weekend. 6.37 showed they were on their way but a lot of work still was needed. 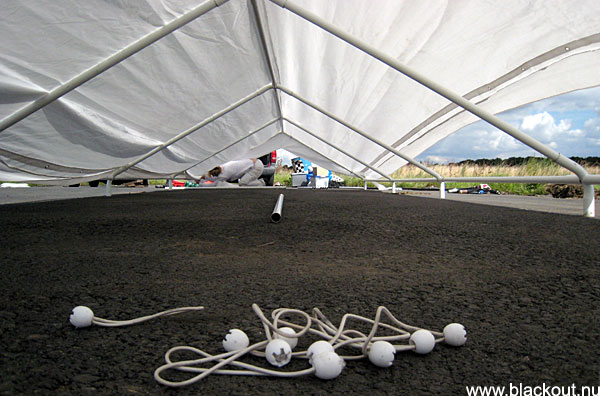 This was Monday and we shouldn't race the Impala SS until Wednesday. That meant that we had two
days to finish our pit and the car. But we wanted our 9 x 3 meter tent up directly to cover the car.
Feels very professional to have a big tent =) We've had many smaller tents, as you may remember,
which now aren't with us anymore. Ex-tents you could say.

It's good to be first, then you can choose a corner towards the Fox-hunting environment. However, we
heard that's banned in England now and it felt good to hear that.. The pit is getting better every year!
Thanks Santa Pod! Only a couple of years ago I had to jack this 4444 lbs car up on gravel...

Then our caravan was delivered, now our home for 7 days. Axel just loves caravans. 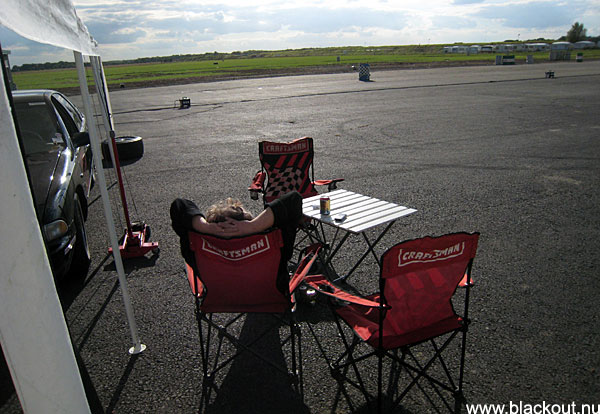 And I just love this! Ahh! It's warm. A cold beer. It's vacation in my life for an hour again. 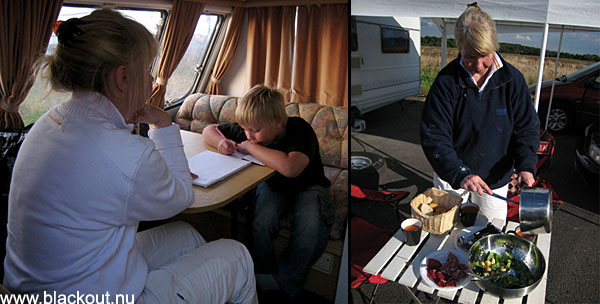 Axel could go for a two week leave from school under one condition - he should write a diary every day
to be presented for the class. His best teacher Agneta keeps him going in all situations and moods.
She always presents nice meals in the pit. This time it was tomato soup, good ham and a good salad.

Sunset chills the temperature down from summer to autumn. It's nice when your 9 year old son finally
shows up in the night, this time with Patrick and driving his John Deere! Axel drove it already two years
ago in Gothenburg, and then Tommy Aga Olsson fell off during cornering, but that's another story. 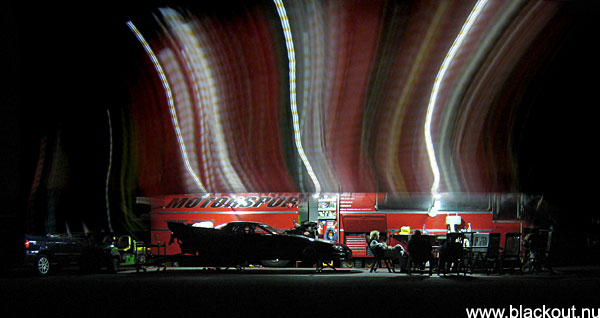 Spotted heat in the chilly night! Patrick and half his team in the never ending discussions. Since
electricity was introduced for the teams at Santa Pod, that horrible sound of 300 screaming
generators during the night was gone and now it was totally quiet! Except for the distant
squeaks from the changing of scoreboard bulbs...

The best thing that happened at this whole race was absolutely family-related! Axel's always been close
to Agneta when in kitchen wanting to support in cooking, also this weekend. This morning Agneta asked
Axel to make the whole breakfast by himself, with us sitting on the outside. -YES!, he said happily and
closed the caravan door on the inside. This was a moment for us... 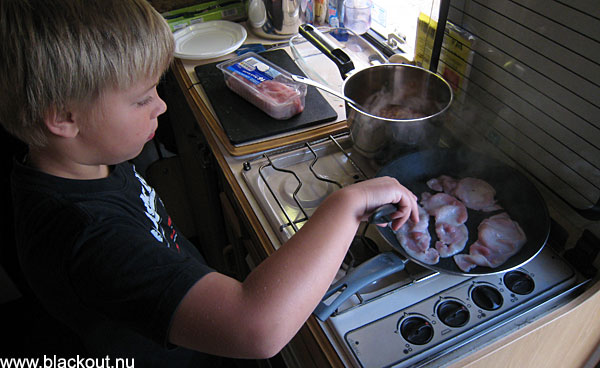 I had to break our promise once, to get in just to take this picture. Axel The Chef! Bacon's up!
-Mmmm...smells like breakfast! 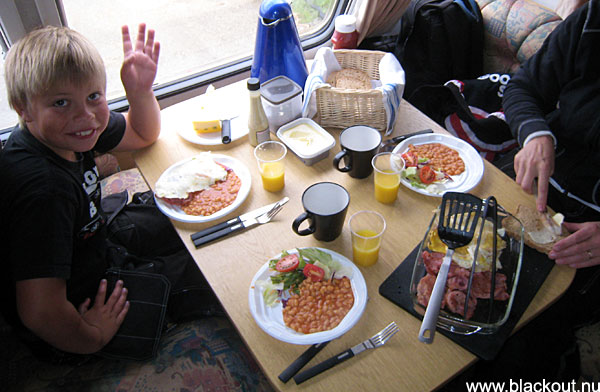 Axel did the bacons, the eggs, the beans, the salad, the juice and opened the caravan door and shouted:
- Frukosten är serverad! ( -Breakfast is served!) The proud daddy almost cried. Love you Axel! 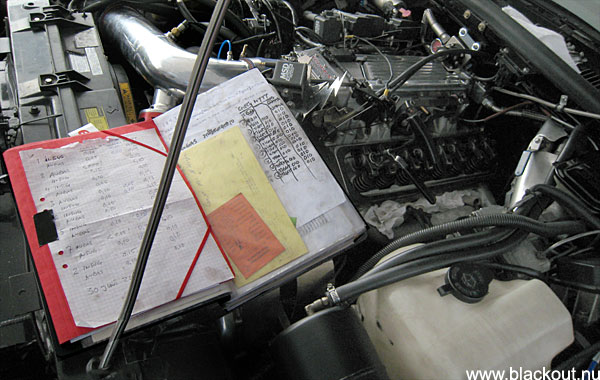 From that breakfast to probably the most hated thing I know concerning my racing - valve adjustment.
And I'll always do it the hard way that late friend Lennart "Bagarn" Bergqvist ordered me - to tighten
not only the small tightening screw ("that's for racers who check after every run") but tighten both the
adjusting nut and the tightening screw at the same time with a certain "last knick at the end" (that'll
make it long lasting for a distance runner like you"). "Bagarn" was not allowing me to do it on a
warm engine (you work too damn slow so the last will be cold if you begin with a hot one).
So I always will do it on a cold engine and it's only 0.10 mm on all because it's a hydraulic camshaft
with roller lifters (if you ever feel that it's weak off the line you may set 0.15 - 0.20 mm on the
intakes, that'll give you more torque) Have never occurred =) For me this hated work can take a
whole day because I'll find all kinds of excuses to do something else, drinking coffee for instance.
(Come on, I would do it in twelve minutes...) I'll always think of what he said to me and I will
always do it the way he taught me. Several people (none of them an Engine Masters Champion)
have told me this is the wrong way to do it, but I made it in "Bagarns" school, and that's the
way I will play as long as I'm in this game. Thanks "Bagarn"!
And in moments like these you think of how really great engine this is, what it's been through and
what it's still delivering. Jeezus, amazing!

Helpful tools and the starting button placed on the windshield to nudge the crank make it easier. But I
still hate it. Love constructing, driving and promoting - but hate brain surgery. My goal is 12 minutes.

Agneta, who loves to take a drive into Tesco for shopping, found a cheap (£ 6) transistor this morning, so
we could listen to the local race radio. However, with batteries it went even more silent than without.
You can have it for £ 1, after all it's been to the European Finals 2007! And China! Then Agneta put on the
race wheels. Axel has found a new interest to place things in the Impala to have them to go quick. This
time it was Rudolf the reindeer who was going with me tomorrow morning, Wednesday. 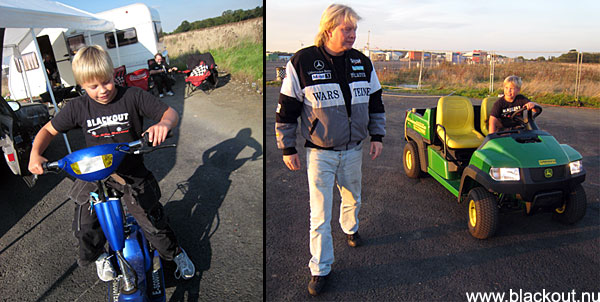 Tog drove by to say Hello on his electrical moped and it disappeared quickly in the hands of Axel.
Next was Patrik who - again - was driven to our camp by Axel. We can just imagine the campaigning
this 9 year old must have been working on to get all these rides all this weekend. But no one
was complaining to us, not even when we seriously asked about it. 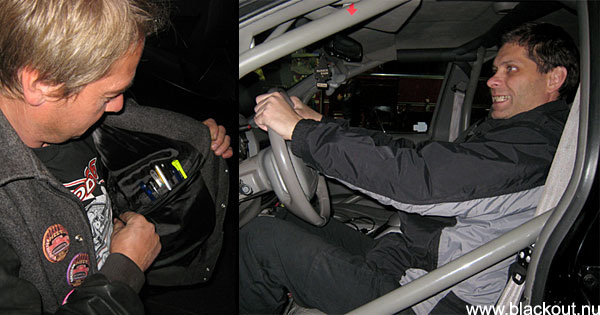 Lars-Inge's secret, he collects company pens. He and Ann-Sofie were here working for Pro Mod star
Micke "Gullan" Gullqvist who also had a secret wish - revealed here - to sit in the Blackout SS. 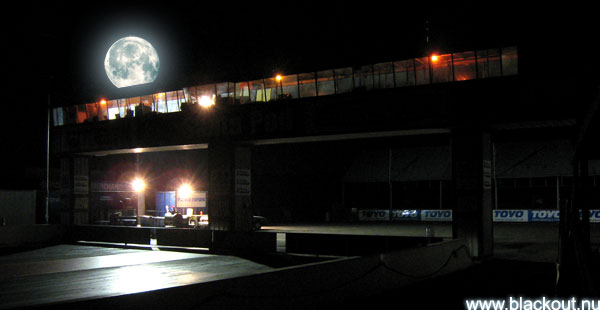 Who is working late nights under the moon at Santa Pod Race Control, for all the Eurodragster.com
visitors from all over the world? 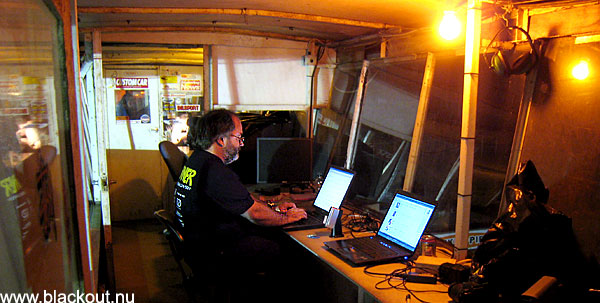 Andy Rogers of course! "Tog" at Eurodragster.com. He's also connected to a couple of forums where
he's serving people with even more detailed information! This is a truly dedicated man who wants
all to be happy. And Tog's playing "Tangerine Dream" and the likes when working.

Teams were rolling in all Tuesday night and were filling the enormous pit area.

Well, we are all ready for the mid-9's with
the transbrake, Anti Roll Bar and all things...