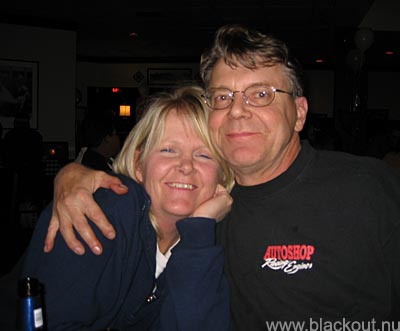 Birgitta & Bagarn in February. On the Top Of The World!

Bagarn died on the November 7th 2006.
And I still can't believe it. He is a big part of my life.
He was my mentor in racing and in business and in life.
And I always laughed when talking to him. Every time.
I always have looked up to him and I always have
carefully listened to every word he said.

He inspired me to take the right road with my cars.
First the Whiplash Camaro and lately the Blackout SS.
He said in 1994 "Man, you should have an Impala SS"
I didn't get his point until much later...

He was like that. After he had met Karl Ellwein, who he
really liked, he told him "Man, you should open a
business with your custom engine building!"
And Karl went ahead.

Bagarn was inspiring - and will always inspire.

Last tuesday, Nov 7, he lost a short but courageous battle in
his home with that cowardly cancer which just showed
up this summer!

At the time of the European Finals I didn't even know.
The last time I heard his voice was on the mobile phone
recording on the evening of my 9.84 run. He left a
voice message: "9.84! That's super!" Then he hung up.

I tried to call him back for weeks! Now we had a lot of
fun things to talk about, as usual. No, not this time.

Short history:
Originally from Umeå in Sweden like me, Lennart,
together with his wife Birgitta and daughter Lisamari,
moved to Orlando, Florida in 1985. Their son Austin
was born in Orlando. 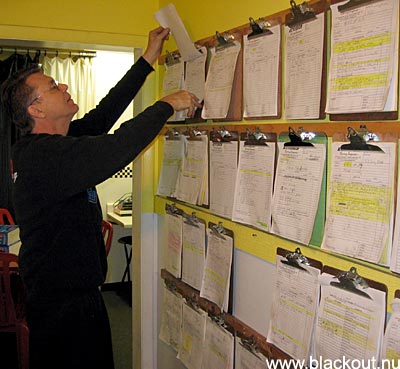 These were only the active, running orders on engines to be
built. Many more orders were waiting.

Lennart was the owner and chief engineer of Autoshop Racing
Engines where he designed and built custom racing engines
for championship cars all over the world. In 2005 he won the
prestigious Engine Masters Challenge, crowning him the King
of Engine Builders. Popular Hot Rodding Magazine named him
and Birgitta "The King & Queen of Orlando"
Many thousands of Americans then got to know what hundreds
of European racers already knew. 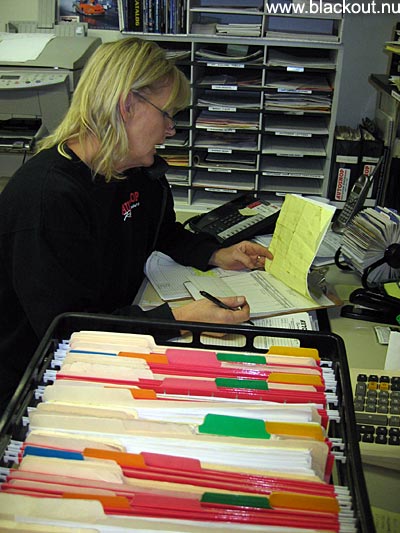 All orders are active for Birgitta!

Birgitta will at Autoshop continue her large and popular
operation of exporting quality high performance parts
to all of Europe.

"The King is Dead - Long live the Queen!" 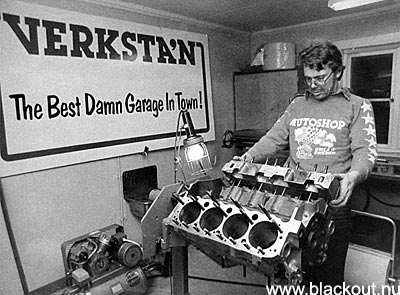 Bagarn building the NASCAR- and Smokey Yunick-inspired 355
for my Whiplash Camaro in his dad's garage in 1983. I hand-
painted that Verkstan-sign. Verkstan ("the shop") was the name
of his slowly but surely growing engine building business while
Autoshop became the Hi-Perf parts import which was Birgitta's
business - and an instant hit. Then and now. When opening in
Orlando all of it became Autoshop Racing Engines Inc. 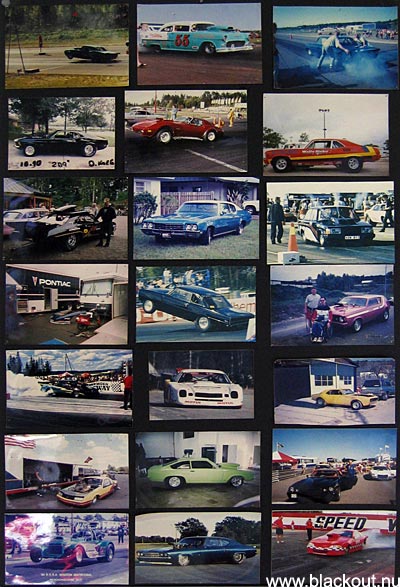 The walls at Autoshop are filled with happy customer's pics
of their rides. These are some early ones I guess. 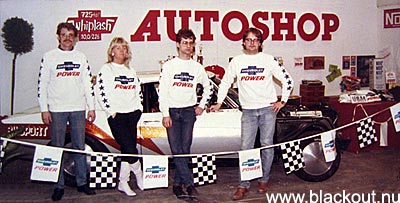 Hahaha! Click it!
Look at us! We look like we have lost something? Bagarn,
Birgitta, Linkan and me in the Autoshop stand at Bilsport
Custom Show in Jönköping 1985. Ah, now I remember why
we look like this, we won the "beer-drinking-on-time-contest"
among all show participants the night before, even against a
Belgian team! The picture is probably taken by Thomas
Öhman who was the only one who had a driver's licence
for a heavy trailer behind Linkan's Chevy Suburban.

All these memories Bagarn...
When I get some time to spare I'll make another Memory Lane-
page dedicated to you, Birgitta, Autoshop and our memories.

If you click the link below you'll see the memorial service
for Bagarn and can also write in his Guest Book.

Below is the tribute I wrote for the excellent Swedish automotive magazine Bilsport, for which
Lennart "Bagarn" actually was working for in the 80's with some V8-articles and more.
This is from Bilsport No 25 2006. Click it to get a much bigger one. (And remind me of translating it!) 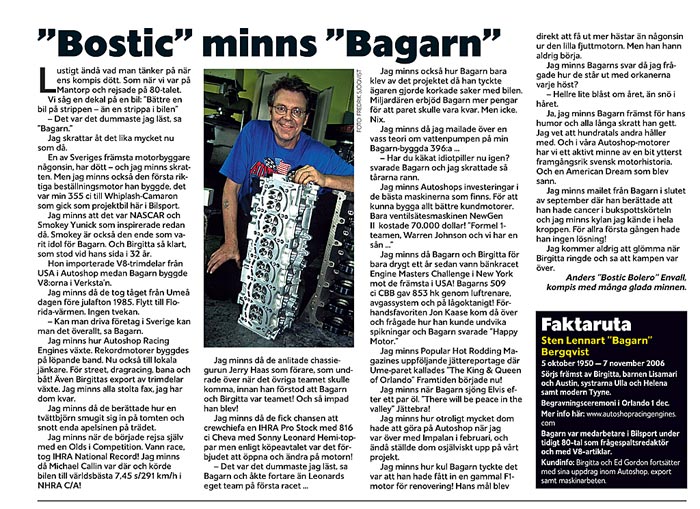 You make us Swedes back home proud! 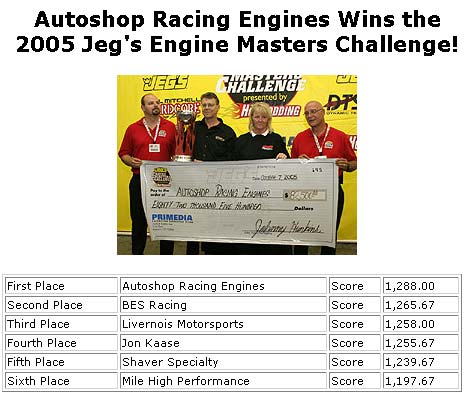 Bagarn and Birgitta did it! 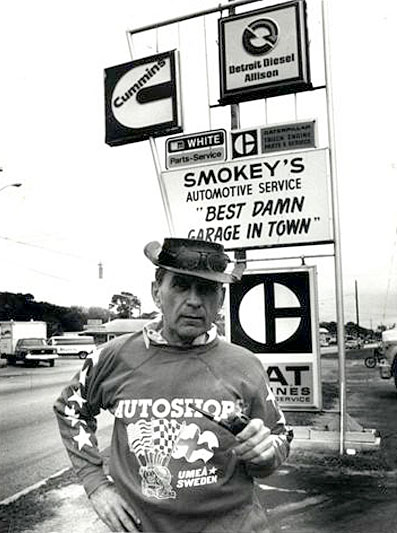 Autoshop once started its business in our common hometown Umeå in
the north of Sweden, as shown here by our common idol, late Henry
"Smokey" Yunick in Daytona Beach, Florida.

Chevy HEMI 812 cubic inches (more than 13 Litres!). 1700 horsepower on gasoline. At the time one of two in the World.
"Chemi-Heads" (Chevy + Hemi) designed by Sonny Leonard under a GM Partnumber! Engine built by Lennart
"Bagarn" Bergqvist at Autoshop Racing Engines Inc. for IHRA Pro Stock. Lennart is also the crew chief. 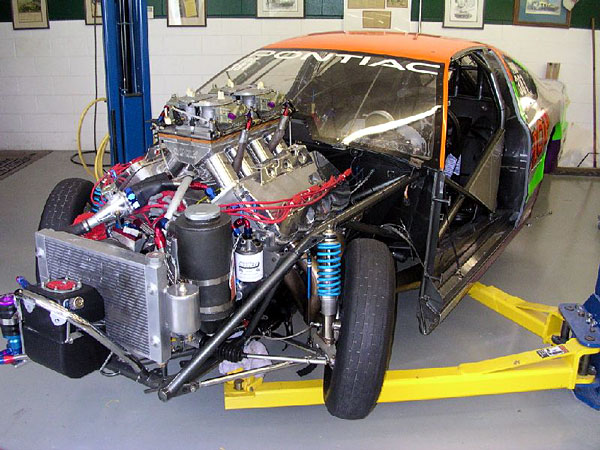 It takes a lot of space that engine...

Driver - and legendary chassis builder - Jerry Haas shoots Billy Dingman's Autoshop Pontiac Grand Am
to mid 6's! Last time at Maryland they "easily" qualified in the quickest ever IHRA Pro Stock field with a
6.610 @ 212.23 mph! 12th spot among 29 teams.
First round win against no 5 qualifier Doug Kirk and because of a bit slower reaction time Haas lost in
second round to points Leader and eventual event Winner Carl Baker - even though Haas had the
quicker ET! This Autoshop Team was heading towards a Winners Circle...

A picture from Lennart "Bagarn" himself with a funny caption which says:
"Please stage Jerry so I can go and call Callies and ask them about Bostic's new crank" 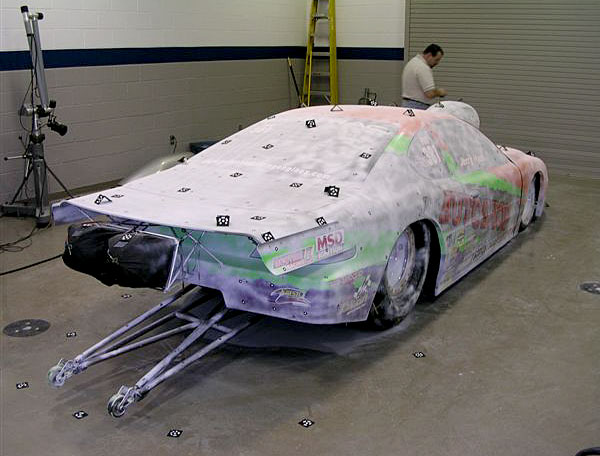 Aerodynamic testing of the monster car at Penske Racing facility...