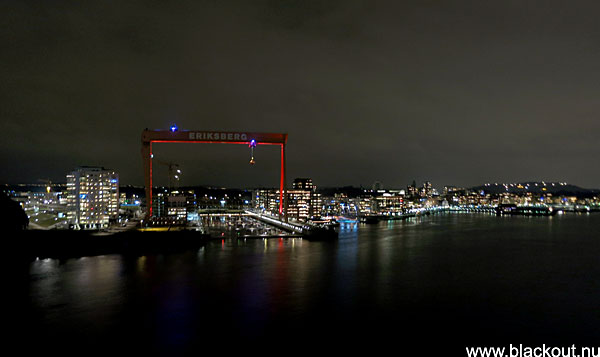 Leaving Gothenburg. Eriksberg is really living now. It was dead and totally blacked out when the warf
business went out and until we opened up Dockhouse Film here in 1989 (we moved

our business
there in 1988) and we were the only company there together with the SEB Bank and the Eriksbergs
Archive! Then it was only one floor lit in our building here - and it was me working overtime. 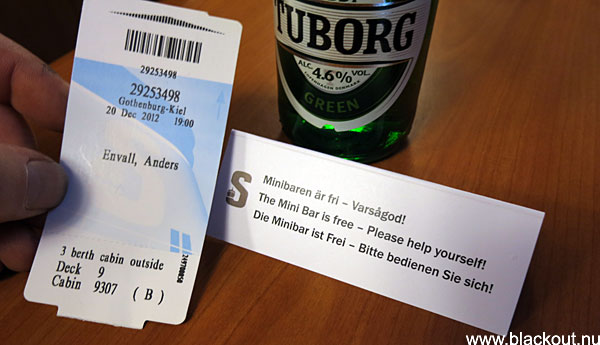 Nice. Yes, of course I know that we've paid for the minibar in our ticket, but still the sign is magic... 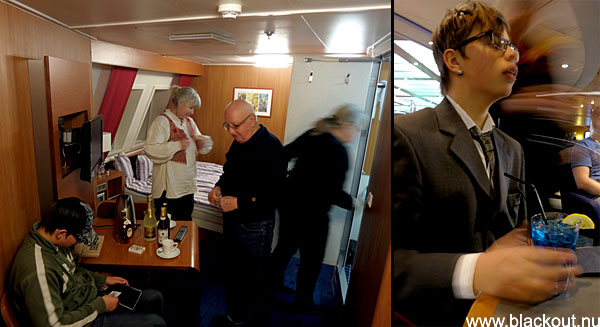 We had ordered some of the nicest cabins to make the most out of this short vacation. Axel just
loves to dress up and was one of the best looking at the Christmas Smorgasboard Dinner.
Blue, strange, good looking, non-alcohol drink tasted nice he said. 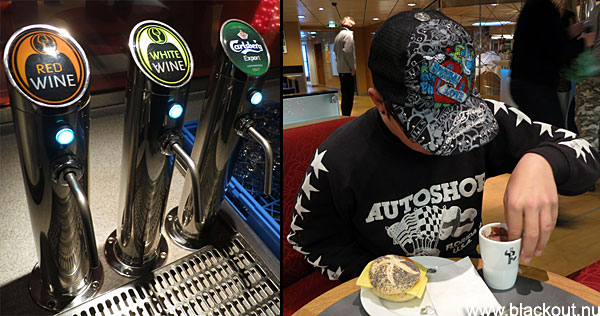 Grown ups had unlimited refill here! Hard luck for me since I had the duty of driving next morning. But
it's always nice to be as fresh as Axel is in the morning. Now he becomes more and more like me
when dressed in my Autoshop clothes... 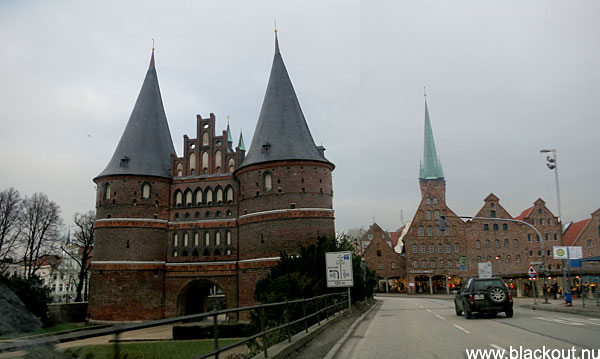 Wellknown Holsten Gate of the Hanseatic City of Lübeck. This port is from 1478 and was one of the
gates in an old city wall. But already in 1216 a bridge here was mentioned by the King of Denmark!
Yes, dzis is old medievel stuff! And today was December 21th and Earth was still intact! 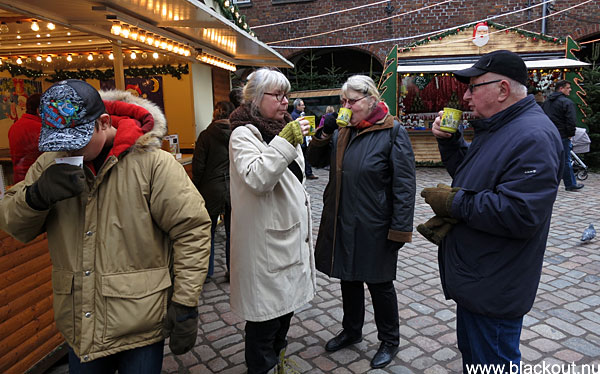 Our goal of the trip to Lübeck - to visit the very old Christmas Market and drink Glühwein, which sure
is warming when outside wintertime. I wonder what they drank in the year 1648 when the first Christmas
market was documented? Probably also glüwein which is as old as the Roman Empire. 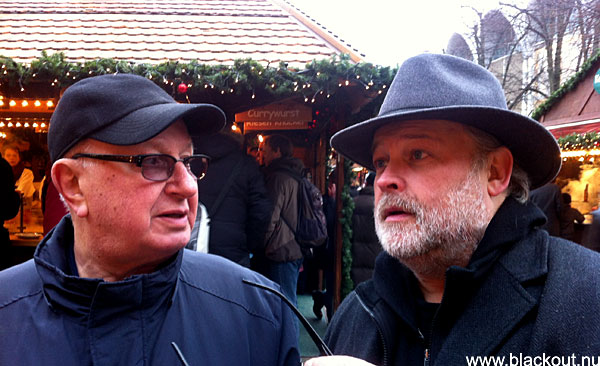 Drinking too much glühwein may end up in you buying a hat for the first time in your life. I did.
Axel's grand dad Thore (left) have outgrown such behavior. 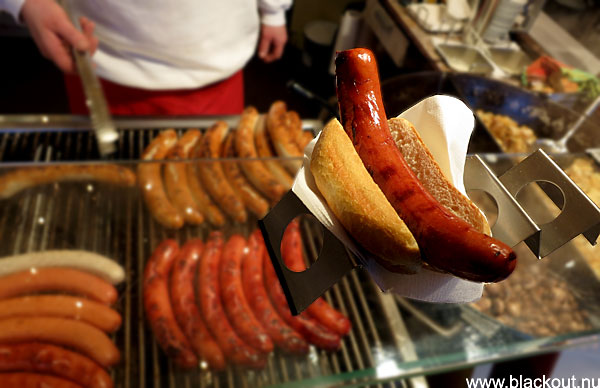 Germany have probably the best hot dogs in the World! Like Bratwurst! 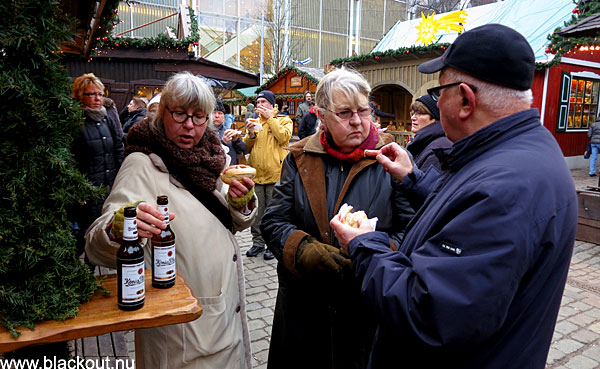 And it is fantastic together with probably the best beer in the World (even if Carlsberg owns the slogan). 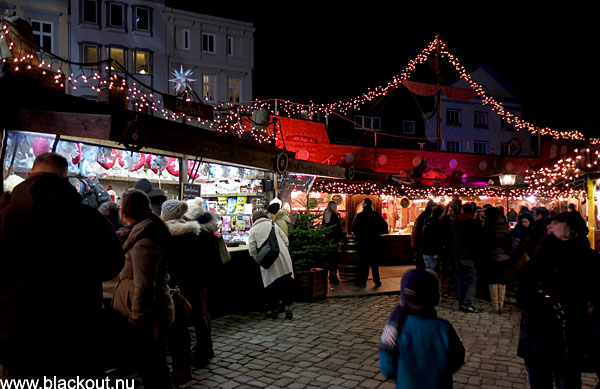 There were a lot of stands on this market to visit, from food to antiques to clothes, toys - all sorts
and all qualities. Personally I was glad that they didn't have any snow, just the cold.
Of course white snow had been better in pictures from a Christmas market. 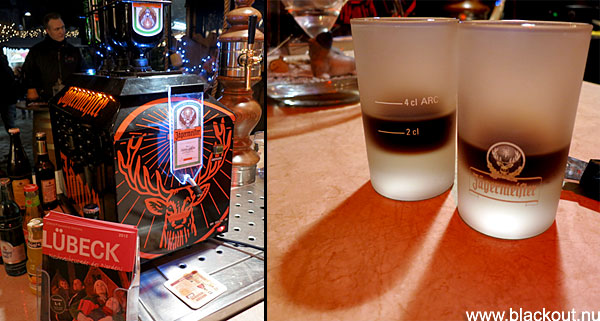 After a days shopping in the December cold it feels just great to warm up with a couple of Jäger shots.
In Germany 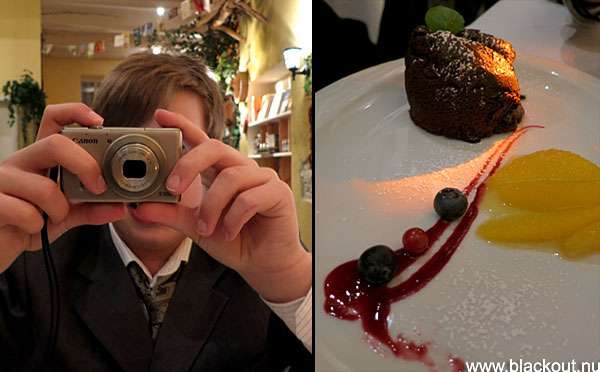 More and more I see this when I am aiming with my camera
, it's like a mirror image. Axel has taken
over my old camera and is taking as much pictures as me and sometimes it feels crowded with
cameras if you know what I mean. When aiming for a picture you see the other camera's laser
beam on the very same spot.
I guess I had it coming :-) 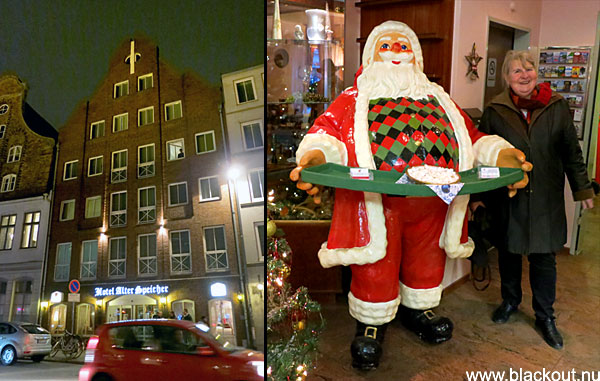 Axel showed here where our room is in the old Hotel Alter Speicher. The hotel reminded us that
Christmas was coming with a large Santa Claus in the lobby which we liked. He gave away free candy. 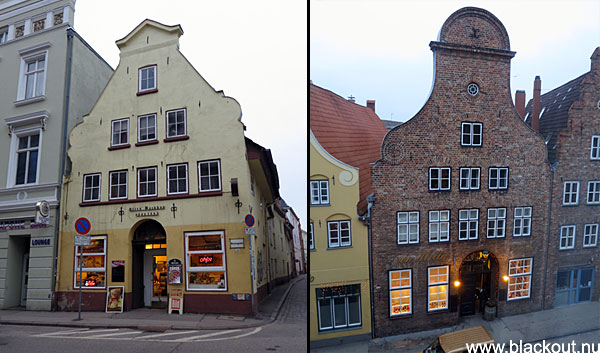 Thanks for not bombing Lübeck during WW2! At least the old central parts.

It's amazing to see how
they built their best looking houses like the Altes Backhus to the left in the year 1443! Back then the
town of Gothenburg didn't even exist, which is one of the largest hanseatic towns in Swedish history. 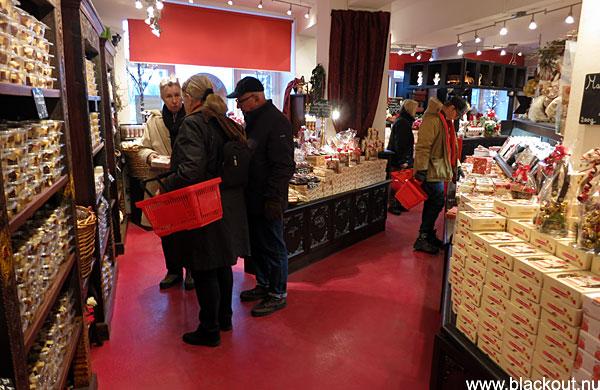 Lübeck is world famous for its marzipan. I didn't know, but Agneta did since she has worked a lot with
this on cakes and things in a company called Snits'A

'na some years ago. Here we are looking through
the amazing sortiment in the store Lübecker Marzipan-Speicher 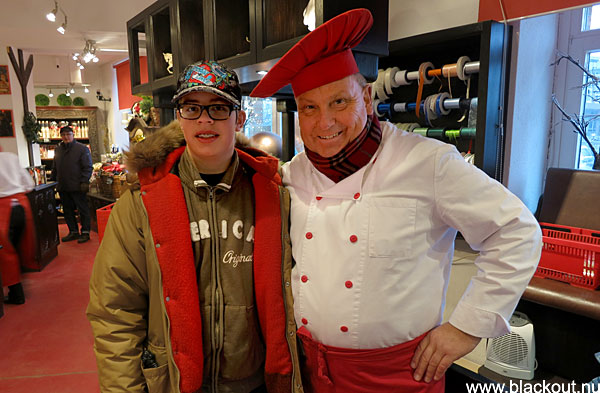 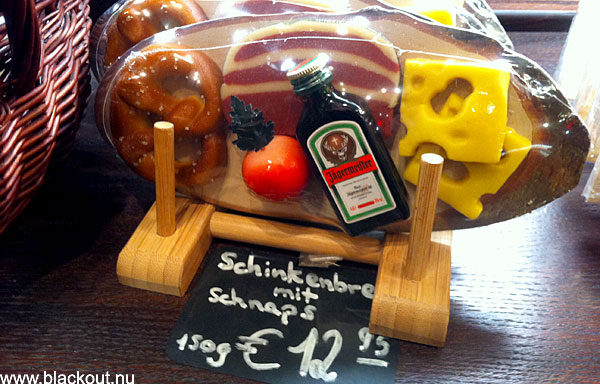 Among all kind of fantastic marzipan goodies we saw in Lübeck I found the humouristic gifts to be
the most interesting, like a ham sandwich, cheese, tomato and pretzel made in marzipan!
However, the Jägermeister seems to be the real? 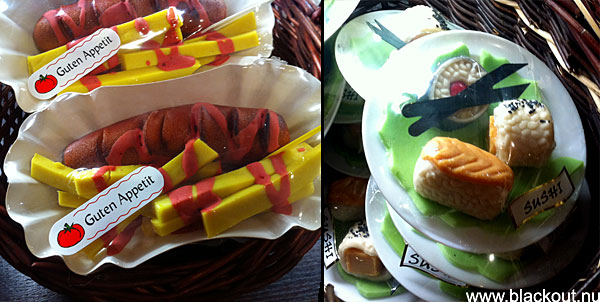 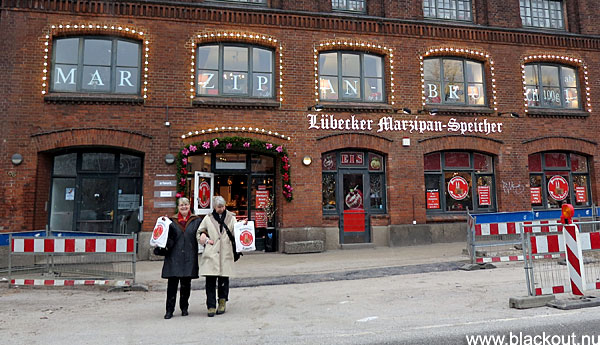 A little sugar shopping was inevitable... it was like a thing you had to do here.

Can you find that marzipan building in this classic panorama of Lübeck? This is what the tradesmen
saw for hundreds of years when entering this European hanseatic hub. Panorama is automaticly put
together of three pictures by Photomerge! Fantastic! Click it and look at it in 100%.

Thanks for the Autobahn! On the way back to the ferry in Kiel we first took another route up north to
little Burg, situated at the coast of Baltic Sea and therefor also surrounded by a lot of ferry traffic. 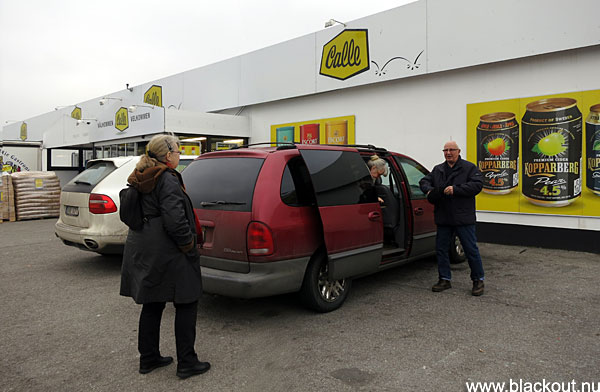 Calle wholesaler in Burg, popular place for Swedes driving here to bunker up on non-expensive alcohol,
all brands. A Danish company in Germany selling Swedish beer to Swedes. Everything is possible!
I have been down here several times just to fill the van with pallets of beer... 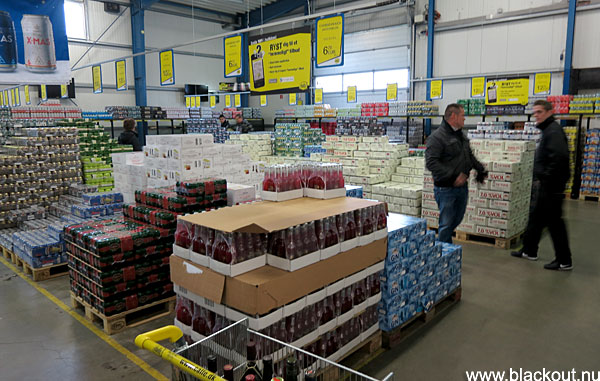 The more you buy the more you save and the more is your trip here worth. If you bunker up for months
you save tax-money to build your own satellite launch pad or whatever you want to do with your money.
Of course Swedish tax authorities have noted this and tries to stop it even if it's legal within EU. They
have made the police to hunt down people at the border to weigh their carriages to ticket overload etc.
Before EU we the Swedes were allowed to bring in: 1 L bottle of liqour or 2 bottles of wine or a 6-pack
of beer. That is the truth. 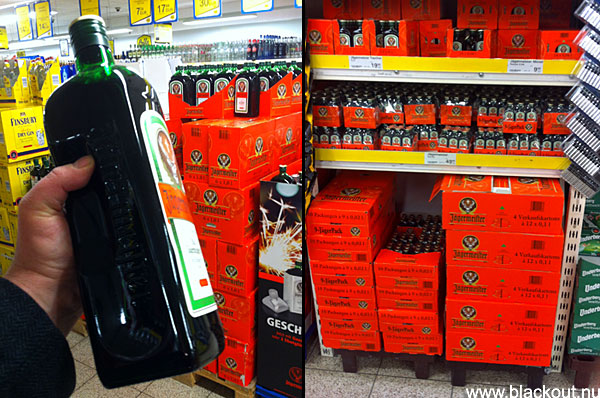 As said before, Jägermeister is on the move in marketing and you find it here in all shapes and forms
and probably cheaper than at the factory? 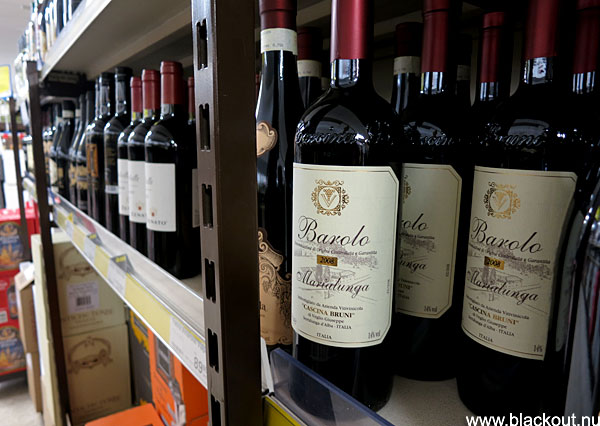 This is definiately the place to bunker up on exclusives like Baralo. 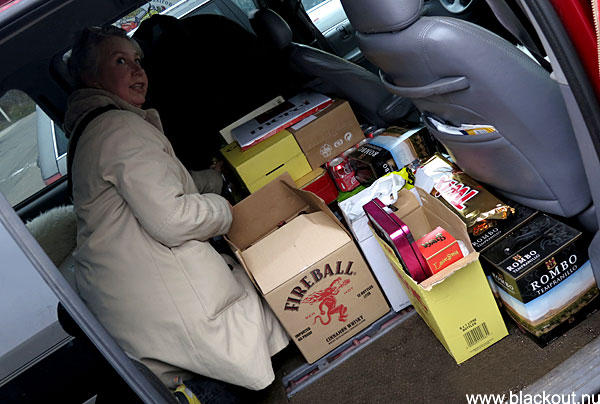 Still we didn't fill the van. But it's enough until next time. 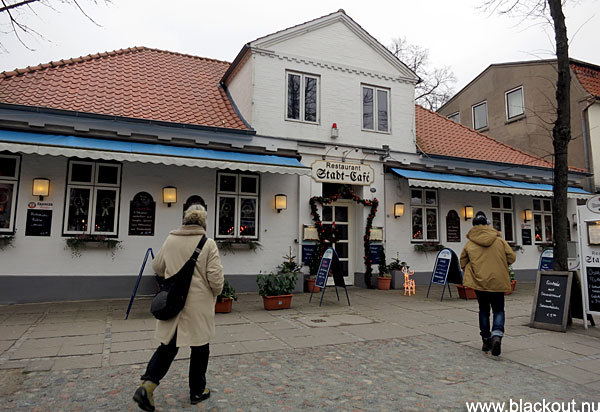 Last chance to have something from the German kitchen. The small town Burg have many cosy
restaurants and we chose Stadt-Café. 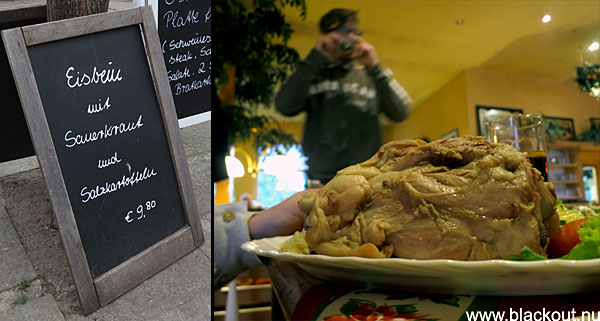 "Eisbein mit Saurkraut und Salzkartoffeln"? OK. Fläsklägg in Swedish. An Eisbein is A LOT of food
(and I thought a too big schnitzel was enough...). Note the photographer in the background
if you know what I mean. :-) 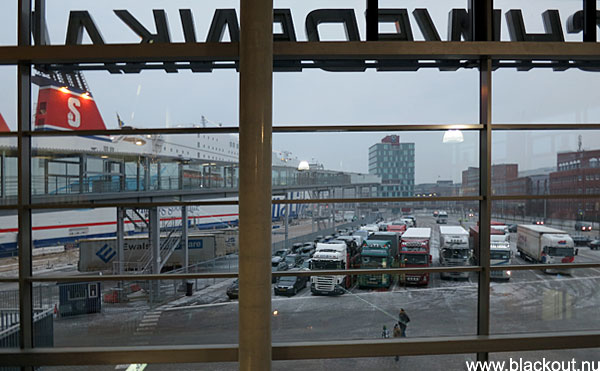 Schwedenkai in Kiel. Time to board the Stena ferry and go home for Christmas. 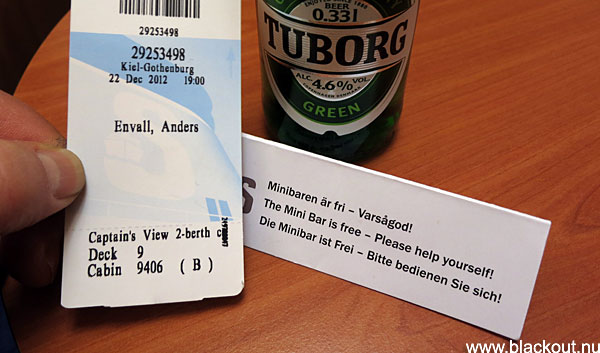 The trip home was as enjoyable as the trip away...