Anything but snow please!

Let's get the Hell out of here! 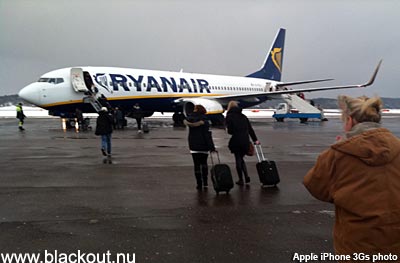 Minus 6 degrees Centigrade and getting colder!
Axel was running to the airplane. Agneta and I followed quickly after.
It was already cold and snow rich but they promised even more snow
over us, so when Axel got his winter sports holiday we said let's go to
the nearest warming sun - London! Ryanair is close and inexpensive.
And this whole family trip could be funded by the money saved on
cigarettes since I stopped smoking on New Year's Eve! 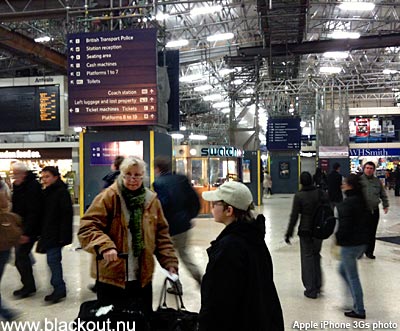 Landing in Stansted and then bus into Victoria Station. And from here
we took the local train to Kidbrooke in the south and our friends... 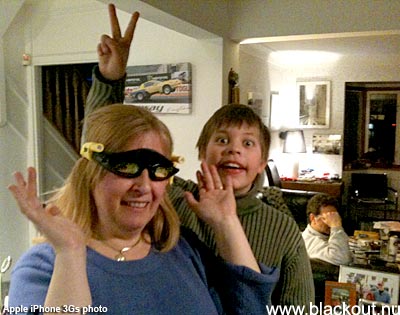 ...Carla Pittau and Rick McCann of Heaven & Hell Racing! Rick is the
one burying his head in his hand in what looks like frustration over
the sudden loud freeloaders... =) 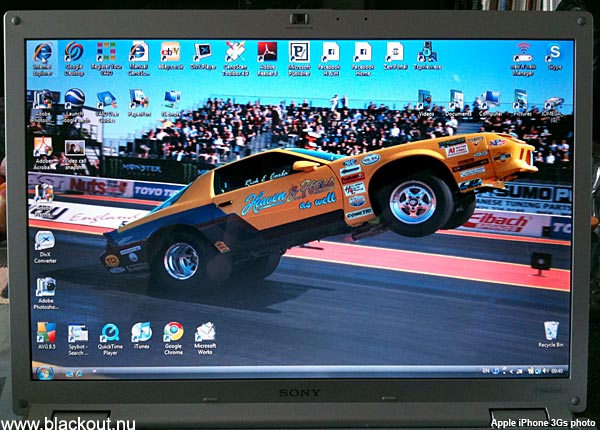 Both Carla and Rick are keen dragracers with a Camaro each! Since we visited them in 2007 Rick
has his own Camaro seen here on their laptop - "Heaven & Hell As Well". It will have a new blue
paintjob for 2010 and other surprises we heard about! =) WOW!
More: www.heavenhellracing.com 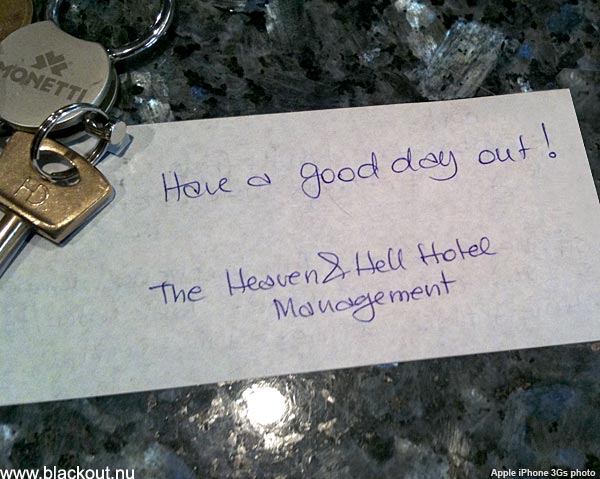 This hotel is by far the best we have ever stayed at in all of England! Extremely good service,
everything is free and good manners too! Much like The Blackout Hotel. 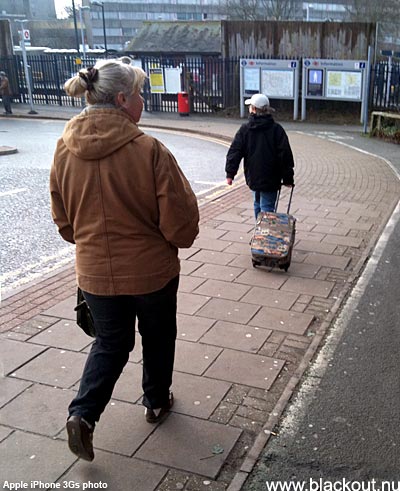 No snow! And 6 plus degrees! 12 degrees better than yesterday!
Ok, let's go for stroll in London!
Yes, we brought one of our carry-on bag on wheels all day, packed
with our jackets so we could dress up before tonights musical -
we couldn't come there like hillbillies could we?! 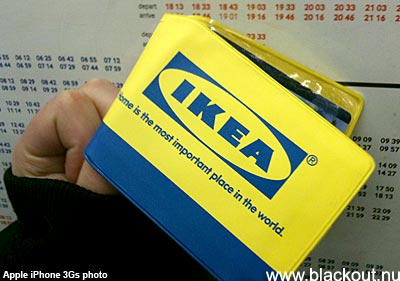 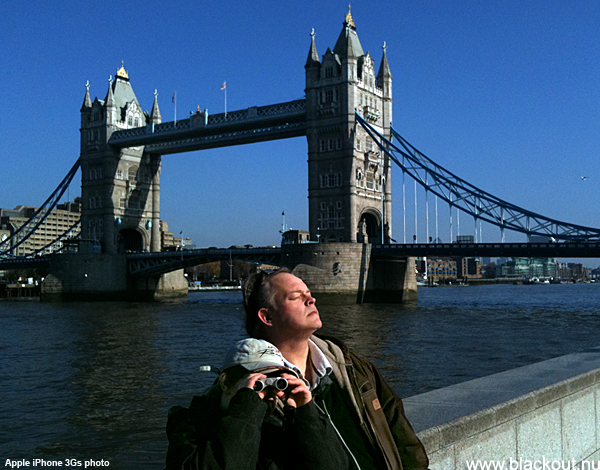 Mmmmmm! At our goal, the warming sun in London! WONDERFUL! Yep, it's the Tower Bridge. 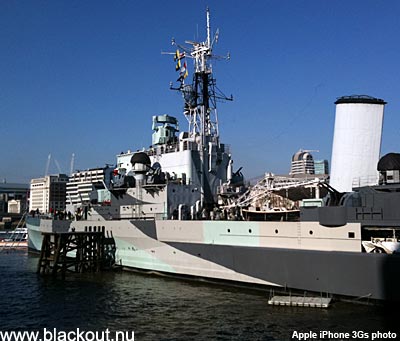 When heated up we thought that we could chill a bit with a visit on
the cruiser HMS Belfast. It was in duty in Operation Overlord outside
the Normandy during the World War II and even many years before! 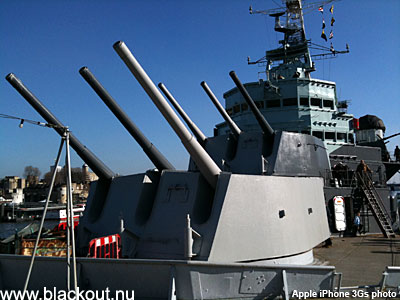 It was very interesting to explore this ship. Maybe it looks a bit old on
the outside but on the inside we imagined it to be quite modern.
It was like a small village in there. 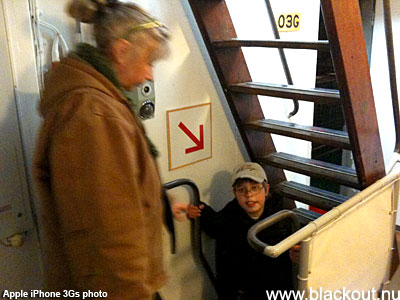 Steep, narrow stairs all over the ship, always with the risk for bumping
your head into something hard. We managed this labyrinth with
our important carry-on baggage...yes, no hillbillies remember...? 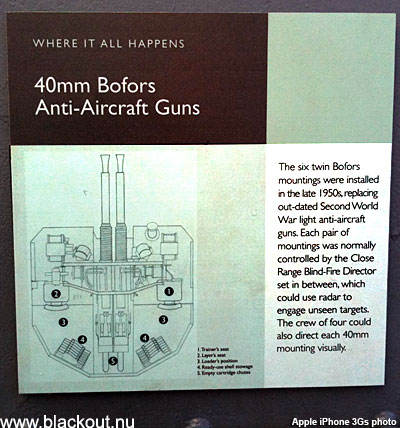 As Swedes we felt right at home when finding Bofors cannons! 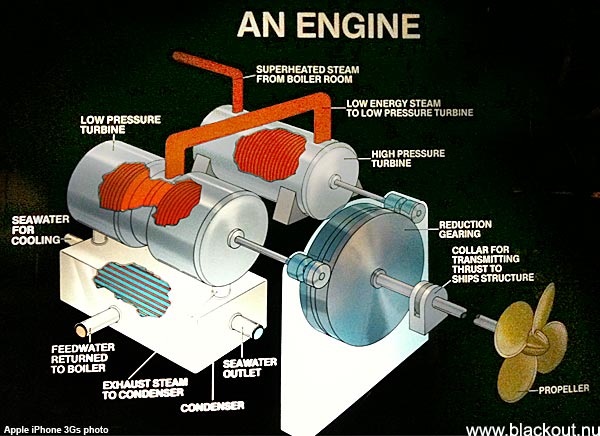 The four engines/boilers were a surprise! More about this tecnique at their own site: HMS Belfast 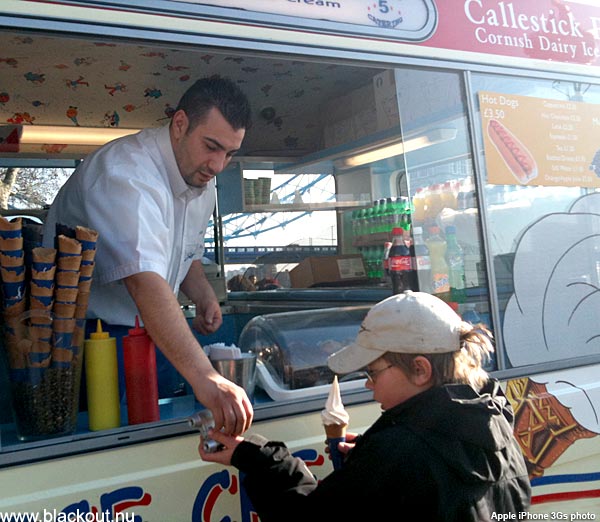 Ice cream on the February 17th! 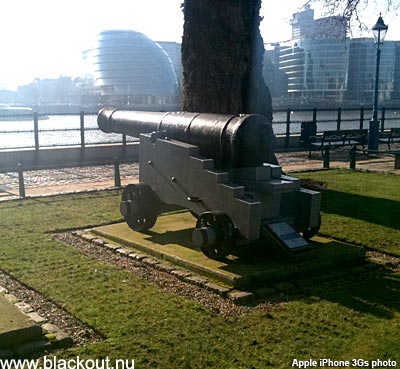 Green grass on the February 17th! Outside The Tower. 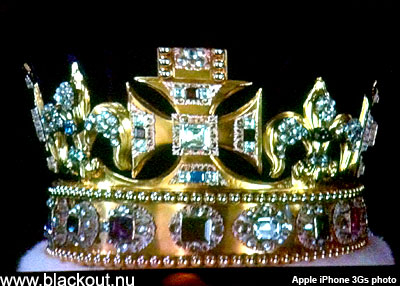 We visited The Jewel House inside The Tower. This is one of
maybe 20-25 crowns on display. The Crown Jewels of England,
potent symbols of monarchy and world class looting,
have been safeguarded at the Tower of London for centuries. We
were close to all the famous giant diamonds we've only heard about
before, like "Koh-i-noor" big as an egg and surely worth at least a
mint condition 1996 Impala SS and a pair of new slicks!! That diamond
is only one of 23.578 gems collected in the Crown Jewels! It was
not allowed to take photos or film in there so I could only take
a few pictures away from the grumpy armed Beefeaters.... 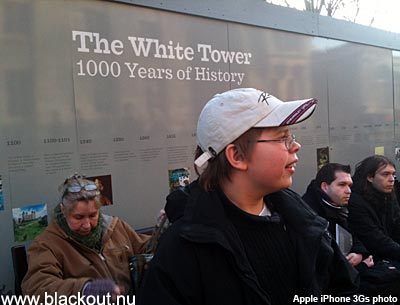 There were more interesting English history to take part in at The
Tower, from Roman's wall, 9th century with William the Conqueror
starting to build the Tower and about all following monarchs up to
today's Queen Elizabeth. But after a couple of hours it was back to
present time and a short meeting with the King of Eurodragster - Tog! 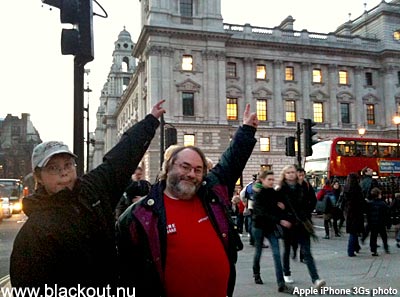 Here's where Andy "Tog" Rogers has his daily work (when not being
the ace editor of Eurodragster.com). It's actually the HM Treasury
that has been around since year 1126 (Tog was aboard a little later).
Tog took us to one of his favourite lunch restaurants and treated us
with terrific fish'n'chips! Thanks Tog! 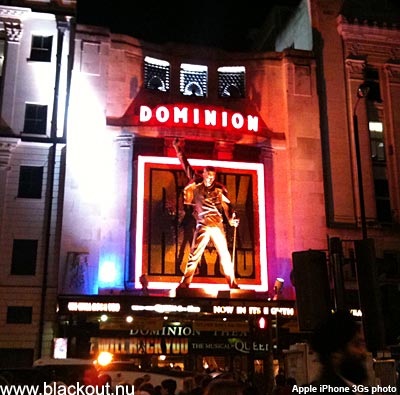 The goal of the evening - "WE WILL ROCK YOU" - the musical about
Queen based on their music! It has been played here at the Dominion
for eight years and it's on indefiniately! We booked the tickets already
in Sweden via the net and that was less expensive! And the show was
fantastic! I still get chills when thinking about The Final with
"Bohemian Rhapsody" (click to enjoy this special Youtube-version
that already have over 13 million views!)
The jackets in our carry-on baggage? Well, nobody else seemed to
have dressed up that much so we didn't even open it. But we had to
carry our bag to our seatings over the heads of the people so you
could say we looked like hillbillies after all... =) 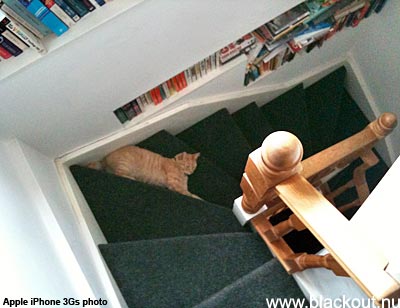 One of their cats and Axel's best friend, Nitro Ginger, likes to block
off the stairs. We didn't see the chief watch-cat Poncho a lot. 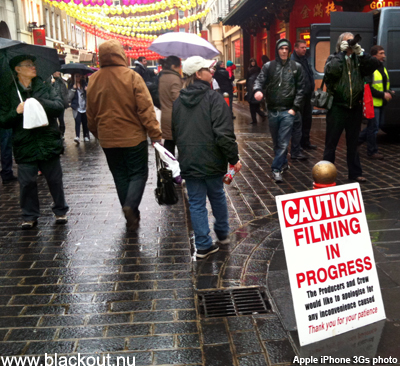 London had some small showers one day - but no snow! When
walking through Chinatown in the Soho it felt like in the Ridley Scott
film "Bladerunner"! And here's another film crew working. 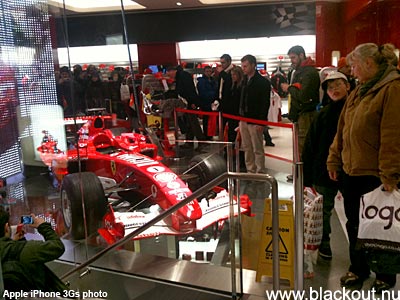 Ferrari shop on Regent Street. We didn't buy it. We have more power
at home in our garage in a black streetable car with four doors... 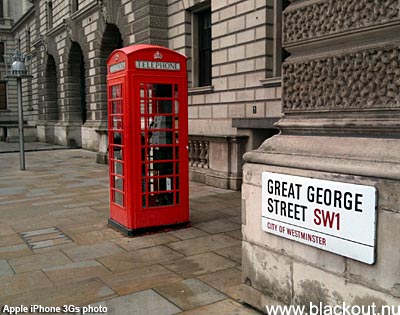 This is a phone booth where you go to make a phone call... 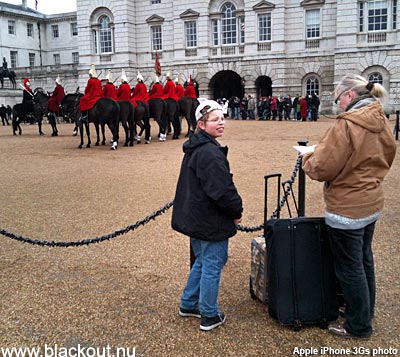 There were some horses that changed places at the Horse Guard.
This was just after we not far from here were refused to enter the
Churchill Museum & Cabinet War Rooms
due to our hillbillies bags... 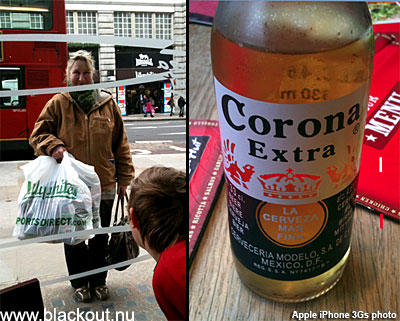 Some last minute shopping at Lillywhites, Picadilly Circus. Axel and
I went ahead to Pizza Hut to take lunch seats. And a good Corona.
Axel had Coca-cola, that's his beer in the world of milk. 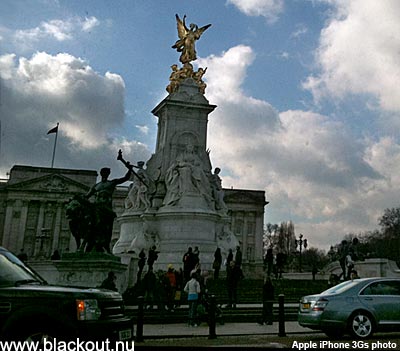 Cab driver told us that the flag was waving up on Buckingham Palace.
Which means Queen at work! 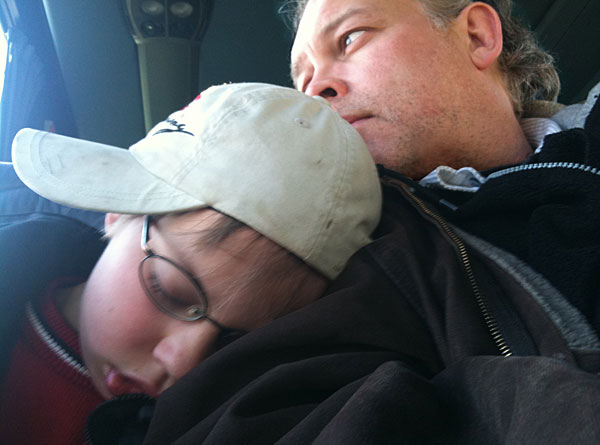 It was a hectic vacation, completely filled with action rather than resting. All of us snoozed on the 75
minute bus out to Stansted and the flight home. 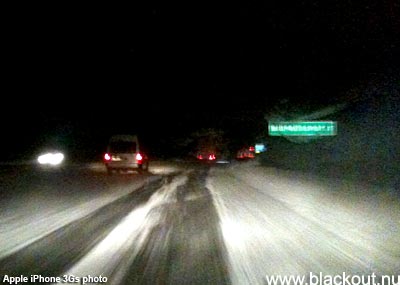 It was now much worse winter than when we left. It was a Class 2
storm and our plane had to reroute from Säve to Landvetter airport
so also Grand daddy had to do that to get us. However, we were
glad we didn't came from Spain in the flight before, it was rerouted
from Säve to Skavsta near Nyköping on the east coast!!! 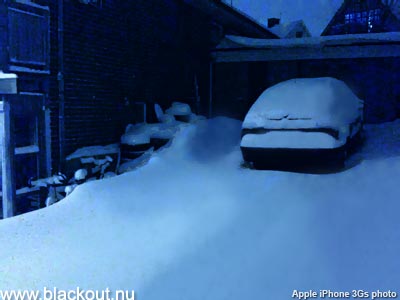 Home again. Were we somewhere else? Did it even happen?
Thanks to our sponsors The Grannies, Heaven & Hell Hotel
management, Tog and Nosmo King!