Easter 2008
Getting there was half the adventure! 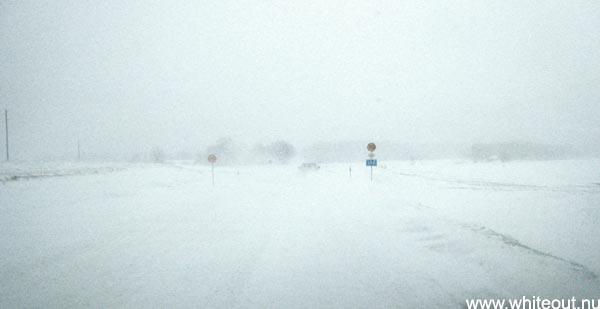 Follow any car! Me and Axel became both rather highly strung when driving into this snowstorm on our
trip north to the cottage in Dalsland. Especially when the road just disappeared. 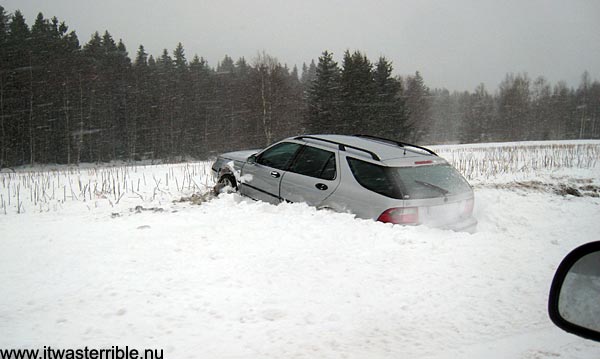 When even a new SAAB hit the ditch you know it's terrible! It was cars to the left and right. 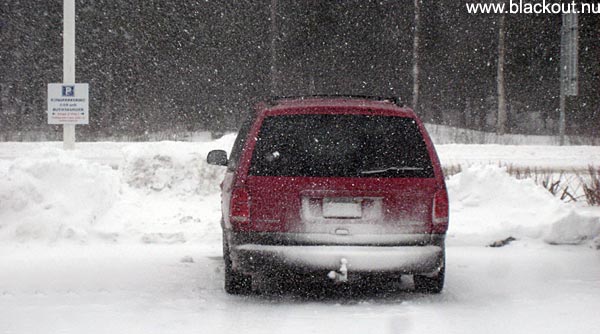 Since Agneta drove her own car on another route we parked our Dodge Grand Caravan at the road cafe
in Bäckefors to wait for her. 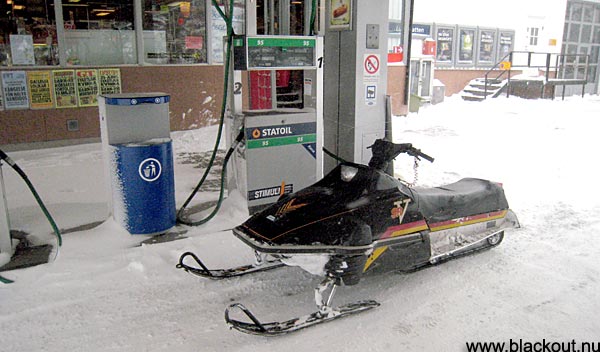 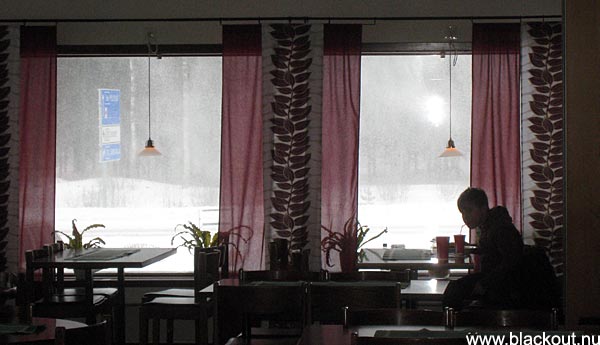 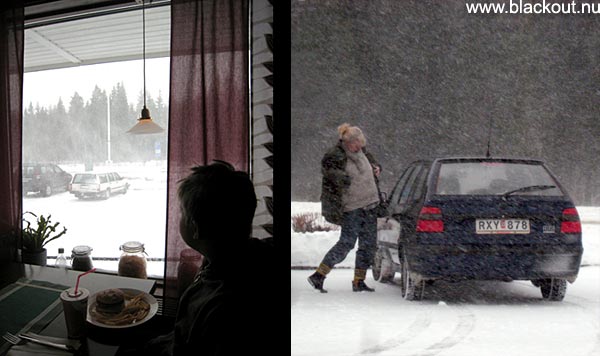 We were sincerely worried about Agneta, since during our last mobile phone call she had a 180 degree
slide in her Skoda Felicia and was suddenly facing the oncoming traffic (!!) so we quickly hung up!
Axel and I were sooo relieved when she showed up alive in that little car! After a quick stop we
continued north...carefully mile by mile. Hour by hour. 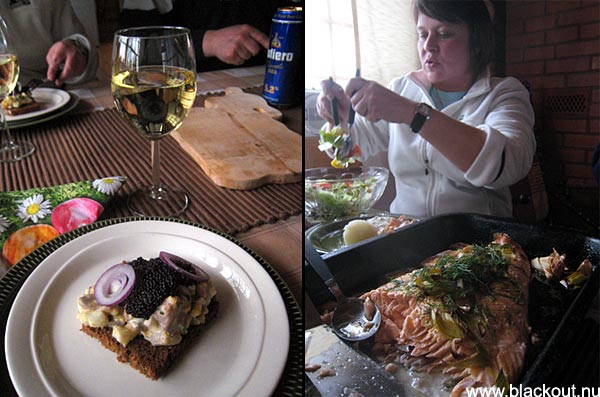 When finally arriving to the warm cottage we quickly forgot about every problem and we could start
celebrating Easter holiday with Agneta's brother Mikael and his wife Susanne. Agneta and she
made marvelous food all holiday! Salmon for starters. 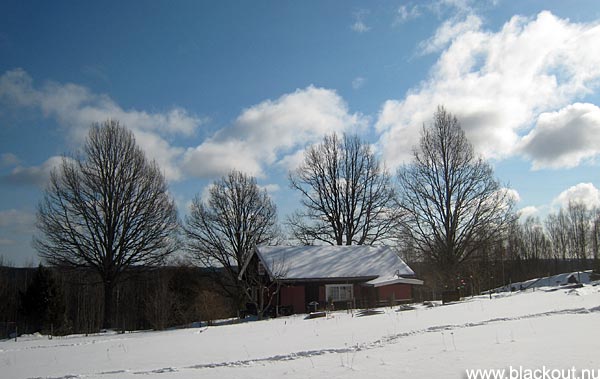 Saturday was wonderful. Not far from here they've just found tracks of the wolf! 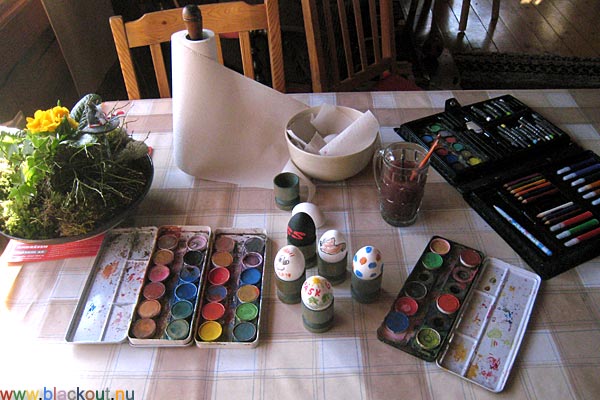 Traditional easter egg painting was included in the breakfast. I wish that Tog @ Eurodragster had been
here. I wonder what he had painted? Union Jack? 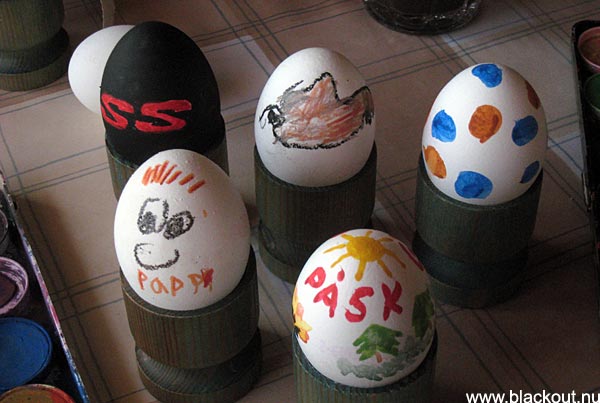 Can you spot my egg? 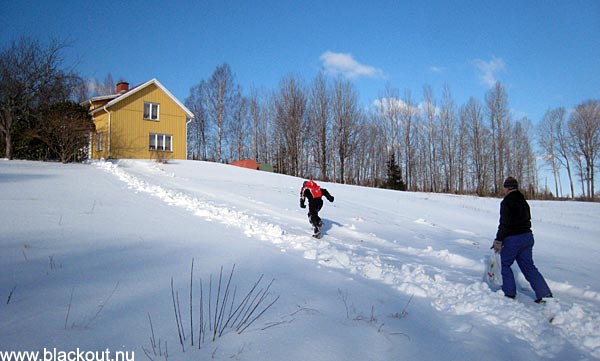 A visit to Arvid who is a brother to Agneta's mother Sonia. 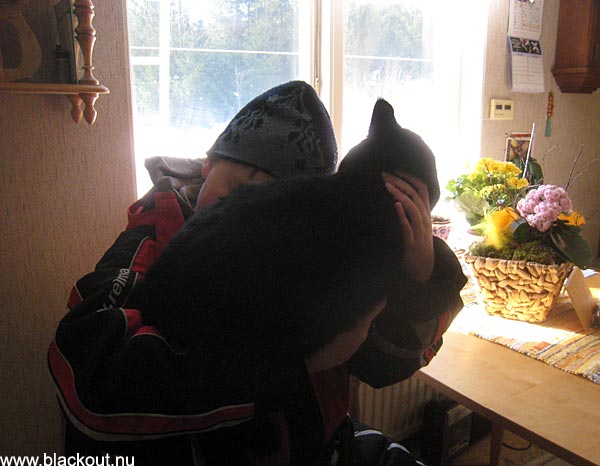 Pissen is Arvid's cat. After some cuddling with Axel he chose to hide behind Arvid. 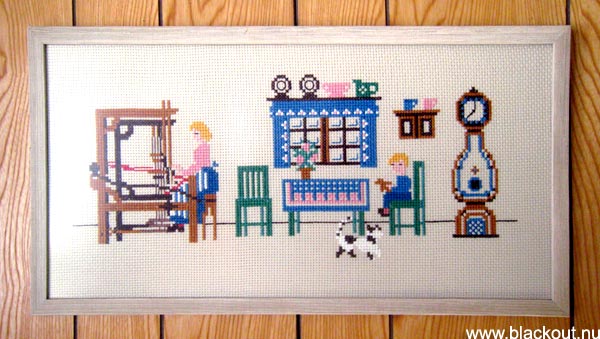 Arvid's cross-stitch in the kitchen. A woman, a kid and a cat. 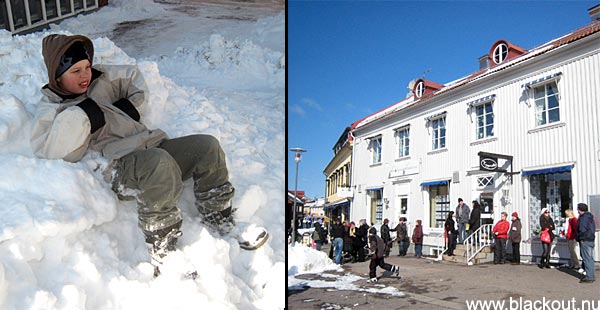 In downtown Bengtsfors all people gathered for their annual Easter Parade at 11.00 am on this icy cold
Saturday. Axel thought he found a good seat. Brrr... 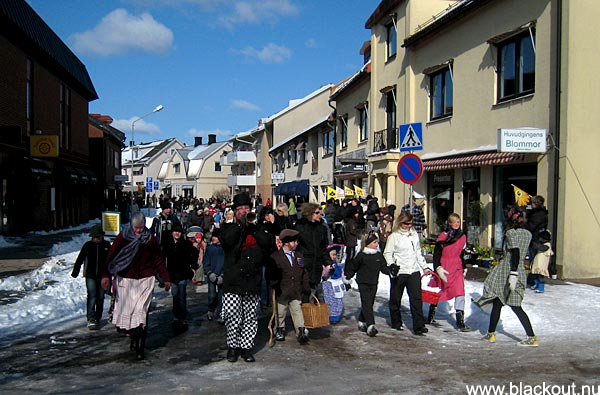 Then they came! Hundreds of Easter Witches and other strange beings! It seemed to be more people
in the parade than watching it? This is a special tradition for Bengtsfors that we've never have heard
about elsewhere in Sweden, which is a country that has very strong Easter traditions. 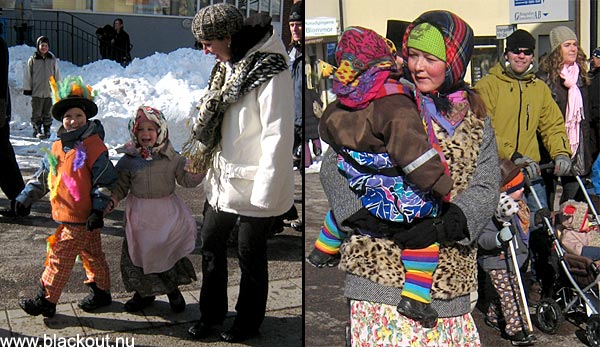 Axel was a happy bystander, he actually didn't want to join the parade, because watching all the little
and big witches and "Easter Men" is as fun.

Not only witches could be seen in the parade but also easter hares, spider man, chickens and some
even looked grown up but that's impossible isn't it? =)

Easter feathers spread the well being feeling of spring. 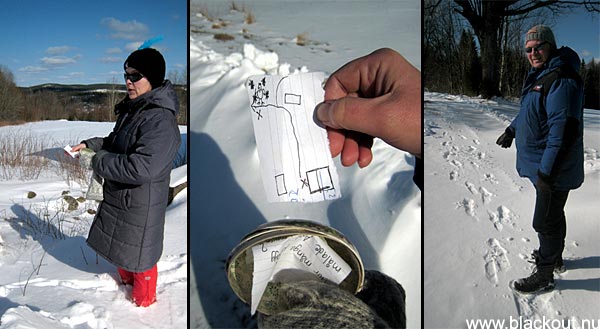 Then suddenly we got to follow leads found in easter eggs buried in the snow. Also some obvious
tracking intelligence was helpful. Susanne, Mikael and I did this because Axel and Agneta had
disappeared some time earlier... 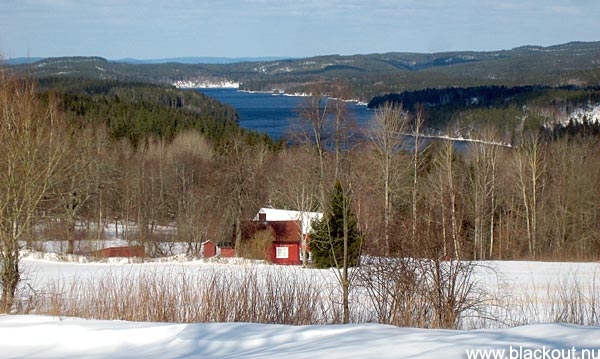 You get some breath taking views of Dalsland when walking about here. You just have to stop and look.
The cold air feels fresh, virgin, never polluted. Ahhhhh! This is the lake Svärdslång - Long Sword. 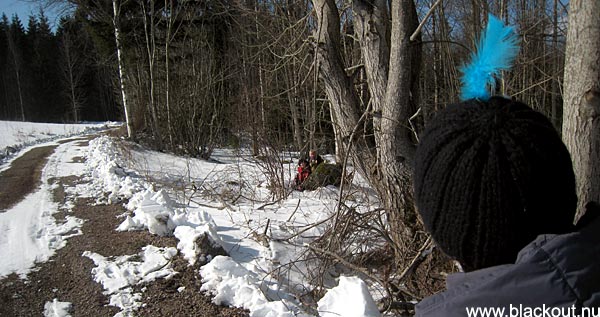 Aha! There are some strange figures at the end of the map! Can we go closer? 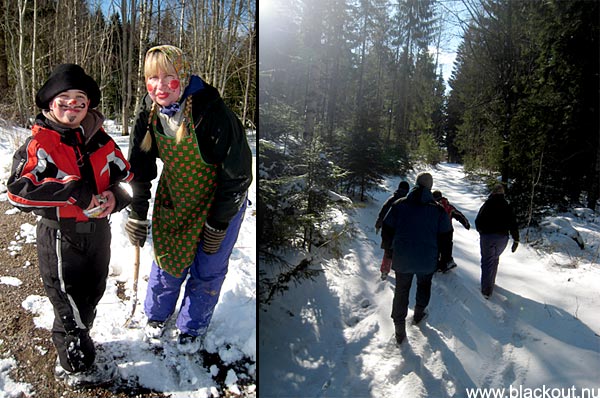 This old witch couple kindly gave us some candy and invited us to a Witch walk deeper into the woods. 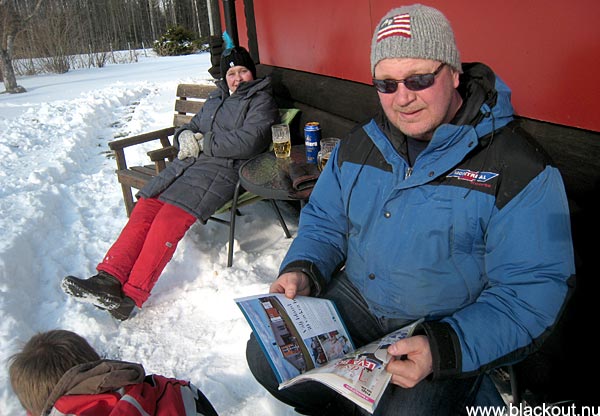 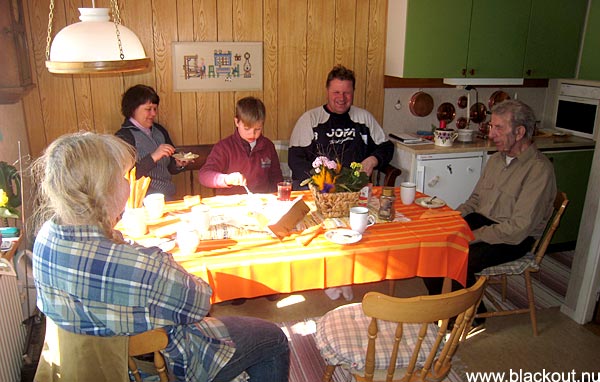 Back to Arvid for Easter cake and strong black coffee. This is so core Sweden! 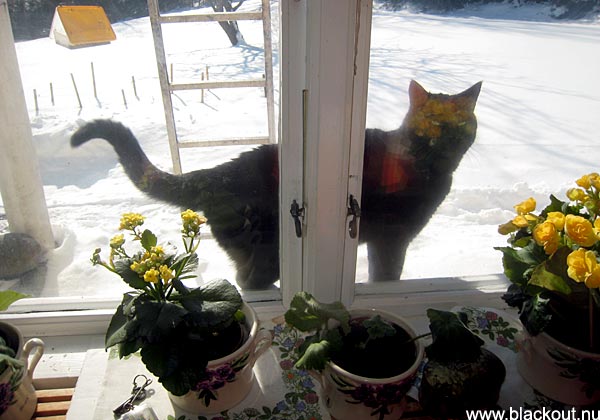 Axel in front of Arvid's barn with a lot of nice machines and tools. Arvid has always been a very skilled
carpenter parallel to his life as a farmer and forester and many good looking things has been created
here. Mikael is taking over more and more and I believe Axel will learn a lot in this barn in the future.
What a fortune for a kid. 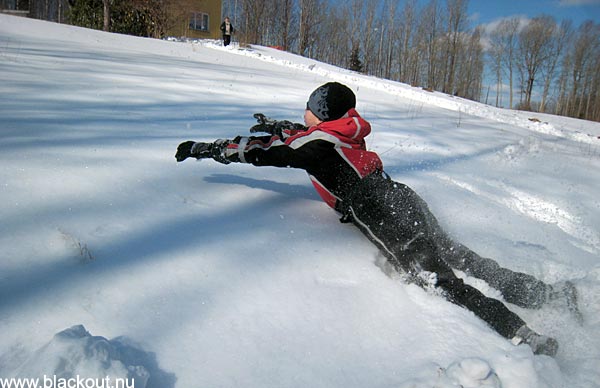 Snow diving. As adults we forgive the snow presence on a day like this. 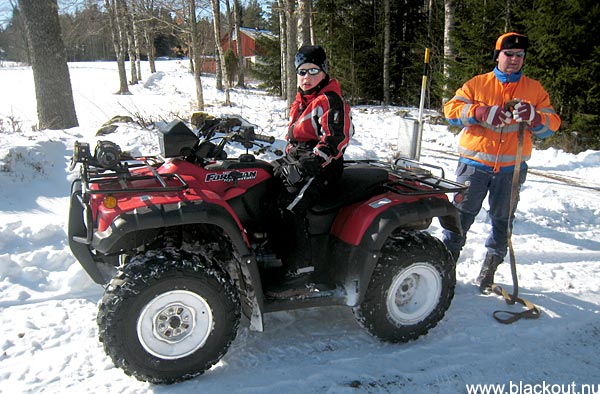 Mikael's 4-wheeler is much bigger than Axel's own. Mikael uses it in his work in the forest and Axel
is in the middle of anything that's happening. Mikael is his real hero. 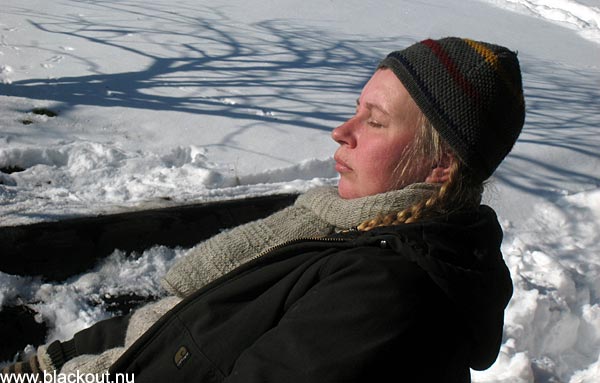 It's nice to see Agneta to really calm down and relax. And getting some tan as well. 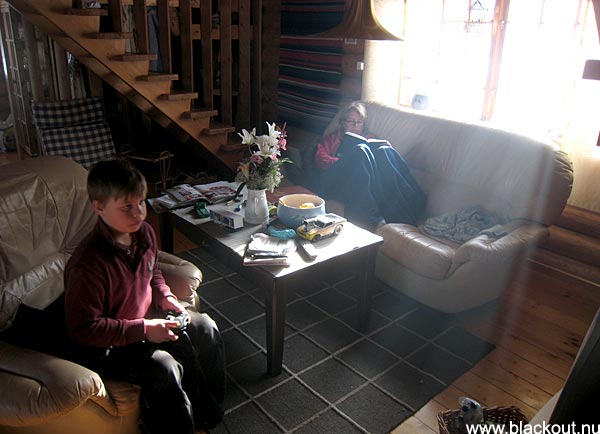 I was able to join my family at the cottage again after a couple of days work in Gothenburg. Mikael and
Susanne had gone home and these two really had found the best way of relaxing. Axel played his
X-Box really well in getting forward in the worlds of Burnout Revenge...and daddy really liked to join! 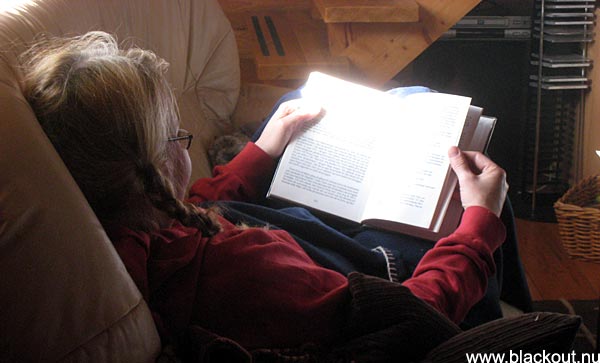 Agneta had been to the library in Bengtsfors and found a couple of books of the history of this area
dating back in the 1500's century when they (church dictatorship) punished people if they cursed.
Many people just escaped to close Norway. 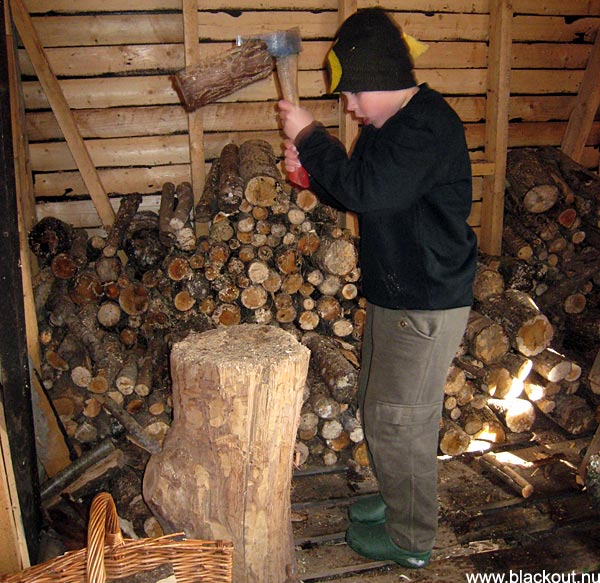 The last thing we did was chopping some wood to leave in the cottage for next guests. Axel is really
good at this and has got an axe of his own, a gift from Mikael.


This was actually a report to Agneta's parents Thore and Sonia who wasn't here this
Easter, so instead they could follow us on the internet, but we're glad that also you
took interest in it. Thanks for reading!
Visit Dalsland - A hidden part of Sweden.