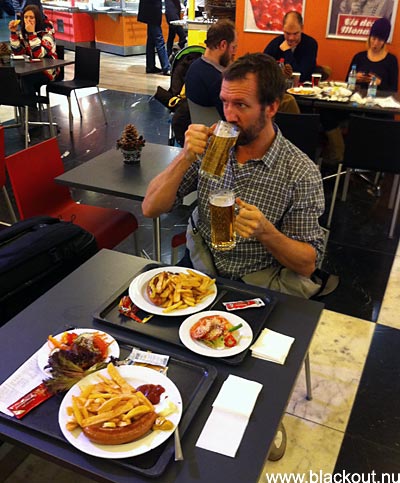 Well, first Jan "Fobbe" Forsberg and I had a stopover in Munic where
we had a fantastic lunch! German sausage, pommes frites and beer!
We almost fainted of sheer surprise, we had completely forgotten
how wonderful this actually could be! The tears grew in our eyes... 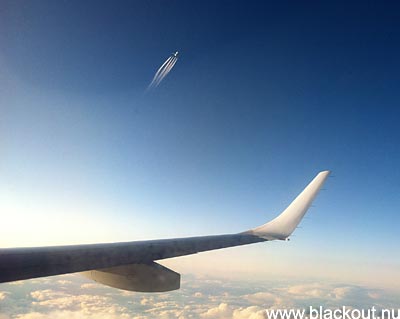 Fun to see other planes in the sky so you can comprehend the
speed. This picture is one of hundreds of the same kind that no one
ever will take interest in, but still it will be collected in my folder:
>Travel >Flight >Right wing >Sun >Other flying objects 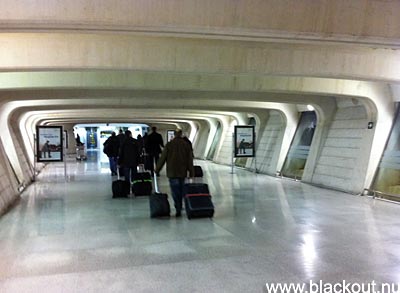 Bilbao is in the Basque Provinces in the north of Spain, but avoid
using the S-word, at least in late night bars since half of all Basques
want to be independent! And some of them want it really bad! A thing
that makes me think more about Portugal than Spain in Bilbao
is architecture like this on the airport. 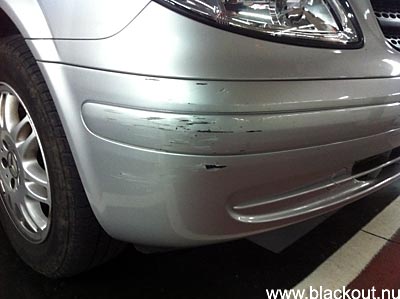 A tip to everyone - always take photos of ALL DENTS on your rental
car before leaving the airport! Just to be safe when returning, when
they can accuse you for causing the damages. It happened to me
last year with Avis when returning. The Avis torpedo waved with the
arms and shouted to me that I had caused damages on the rear
of the car - before I had even stopped the car - and he came
towards us at the front... 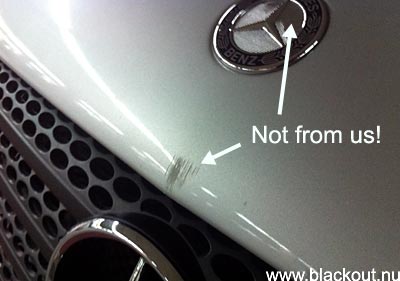 ...and we hadn't almost even used the car, except between the
fenced hotel garage and the monitored parking inside the business
where we were filming. He did a quick walk around and pointed out
several dents while we just looked at each other within the travelling
group! I would have loved to have own pictures then!!!
It was an obvious Avis fraud - maybe a company campaign? - so I
wrote them an angry letter and begged them to put up their bill into
the place where the sun don't shine - but they stuck with their
story - probably it was full up there? Maybe Avis needed the
5000 SEK better than I? I can only say **** them! 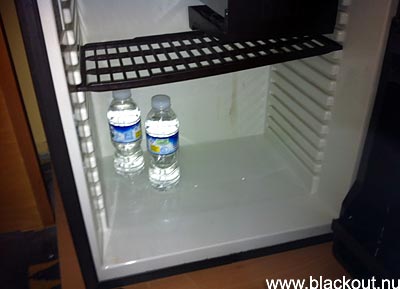 When opening the small minibar on the room I understood that this
trip wouldn't be so expensive... 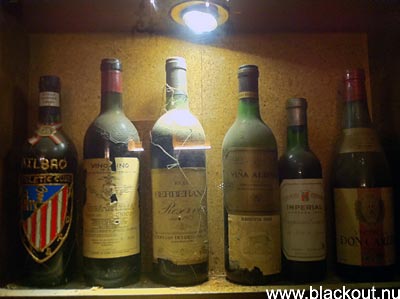 ...on the other hand, when visiting some of their best restaurants
I saw that this could be the most expensive drinking ever. 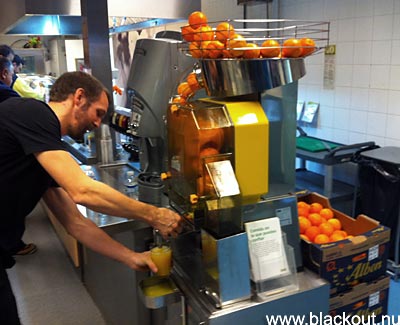 The best drink served here! In the IKEA restaurants in Spa...Basque
country they have smart orange juice machines where you see
the oranges quickly being pressed! SO GOOD!
A box with the oranges you see on the back there is only about
5 Euros. I guess water could be more expensive? 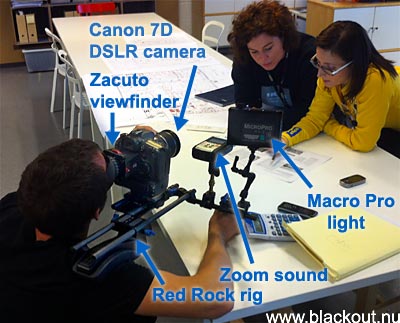 Forget all about the old and heavy Betacam cameras. Today, this is
absolutely the new way of filming! Much better quality and much less
expensive equipment! OK, you need to syncronize the externally
recorded sound but there's a programme for that as well...
"Fobbe" here is very good with this new system, and that combined
with a very good photo- and composition talent is smashing! 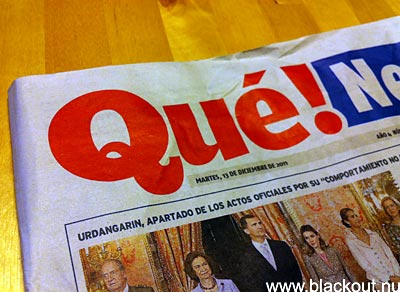 - Qué? as Manuel said at Fawlty Towers. Here are all the answers. 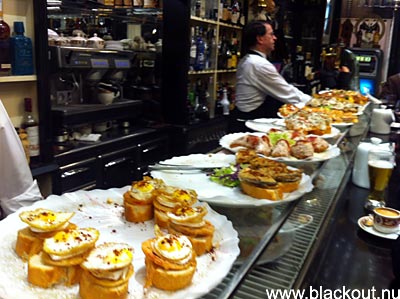 You can eat this until you die so good it is! The Basque version of
"tapas" is more like Danish smörrebröd than Spanish "tapas". Small
artisticly made wonders called "pintxos" - Pinchos! Mmm... 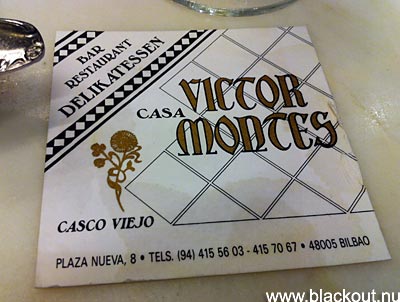 The tip we got for an especially good restaurant, I now give to you! 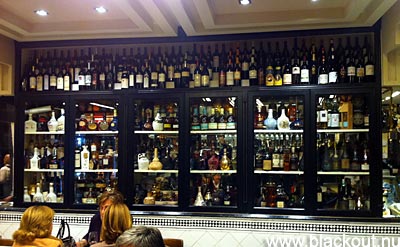 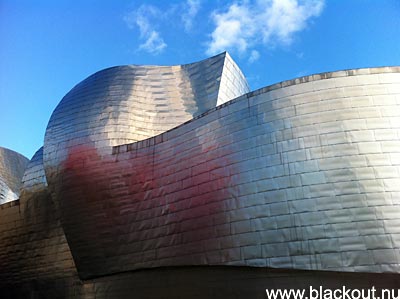 Most fantastic with Bilbao may be the Guggenheim Museum which
has created an important added income to the old harbour and
industrial city of 1 million people. The museum dressed in titanium
first looks an outer space thing that has landed in the middle of the
city, before you find hints from the sea in it, shapes of boats and
sails...you don't tired of looking at it!
Congratulations to the architect Frank Gehry! 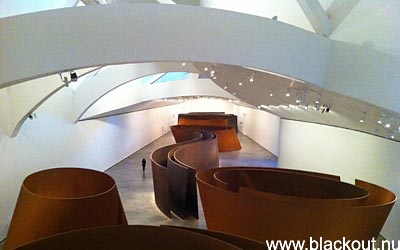 The building itself is most impressing but you also find fantastic things
inside, like "The Matter of Time" by Richard Serra. Even though it's
forbidden to take photos inside the museum it strangely looks like
I have some photos that I can share with you! Serra's enormous
forged steel walls make you a giggling boy when running inside
them and making sounds! We were totally blown away by them!
How did he make them? Rented a ship yard? Follow the link above! 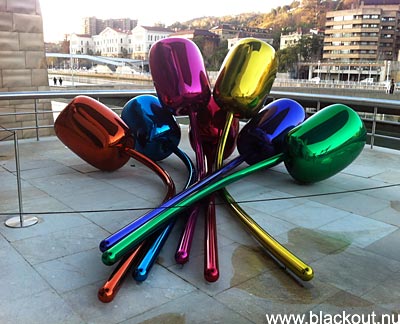 "Tulips" is made by Jeff Koon, the guy who married Ciccolina...
(Now is the time you should look like you never heard about her). 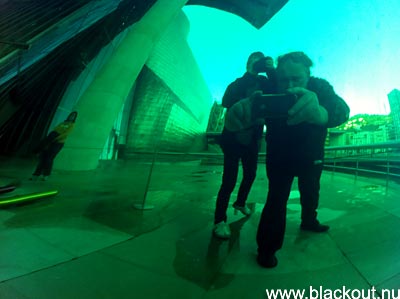 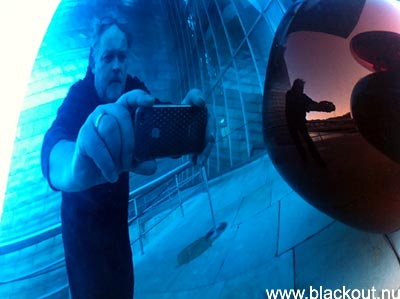 You can take as much photos you want on the outside, but it is
absolutely forbidden on the inside where many guards are watching! 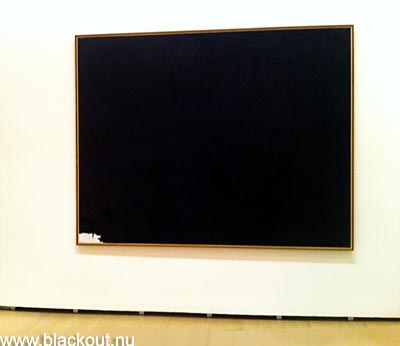 This one I loved most. I understood it directly!
Totally blacked out, but with a glimpse of light. That's our racing! 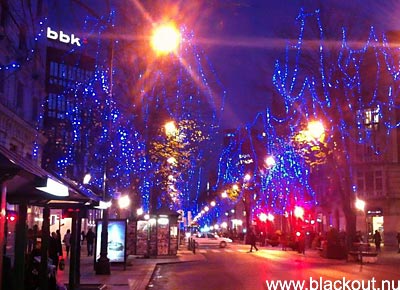 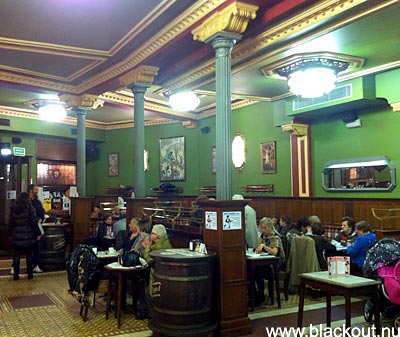 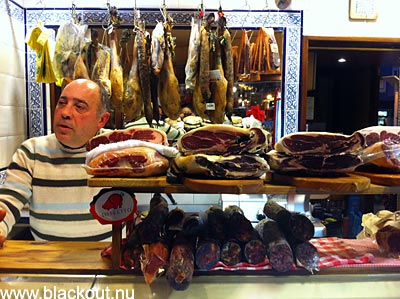 To bring home from Bilbao? Jamón ibérico of course! Pata Negra
that is! The world's best ham. And a couple of bottles of Rioja... 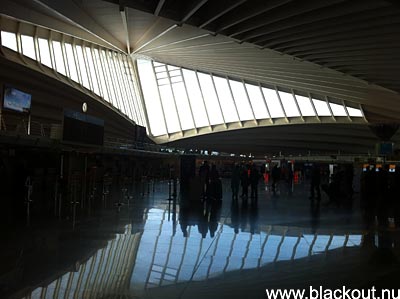 To the airport to go home. A fantastic building! 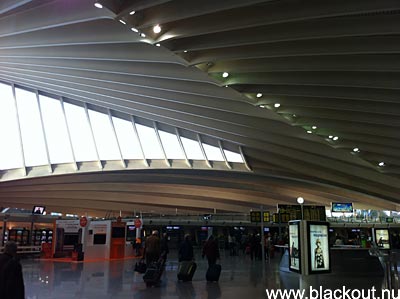 To look at and to be amazed at while waiting. Don't you agree? 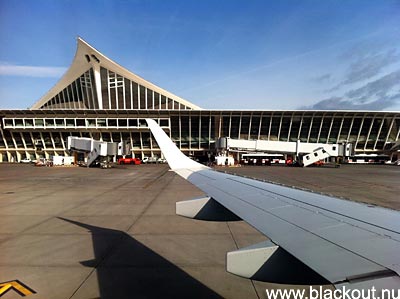