To a better climate 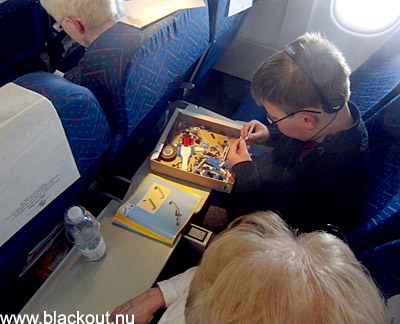 5 hours away are the Canary Islands. Just outside Africa, and south
of Miami in latitude. The flight went very well even if Axel asked the
old lady next to him if she got false teeth...but she really didn't mind,
she said she had a good talkative company. 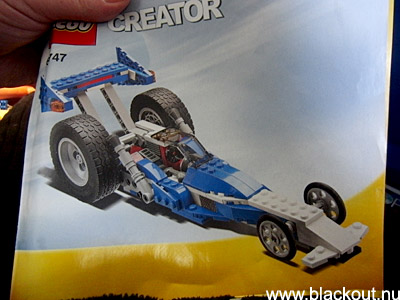 Lego's latest dragster was finished on the flight. It was a Swedish
plane from Stockholm in 1957 which began the whole charter
tourism era on these islands! wikipedia/Canary_Islands

You must collect them all... We choose Gran Canary this time,
stayed outside Puerto Rico. We've been to Tenerife and
Fuertoventura before. Click map to get a big one! 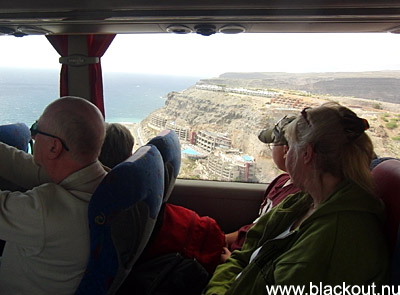 This is not from the plane, it's from the bus ride to the hotel! On this
island they are experts to build large buildings, hotels and apartment
complexes on the steep cliffs just at the sea! 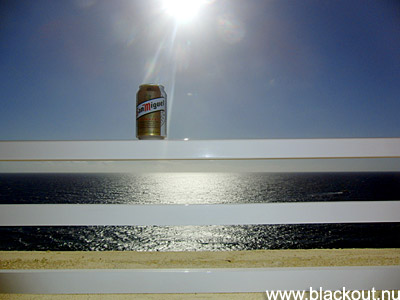 First beer upon arrival. Ah! The Sun and the Sea! 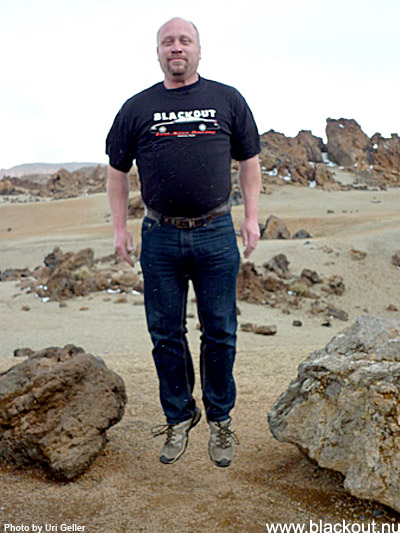 David III sent this picture in the email. It was taken on the top level
at the volcano Tedie at the neighbour island Tenerif - and David III
claimed that he had a problem with the gravitation there, like on the
Polar Circle! I can't just believe it, I think he just jumped to get his
picture published here in the NEWS of www.blackout.nu 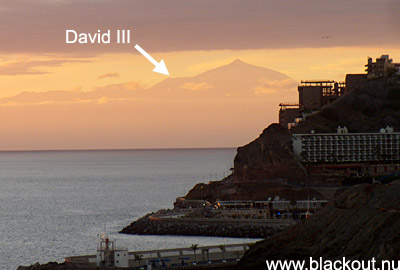 Mount Teide at Tenerife seen from our balcony at Gran Canaria. The
level David were at, is about 2300 meters above sea level (7550 ft)
while the summit is at 3717 meters (12195 ft) which makes Teide
the highest peak in Spain. 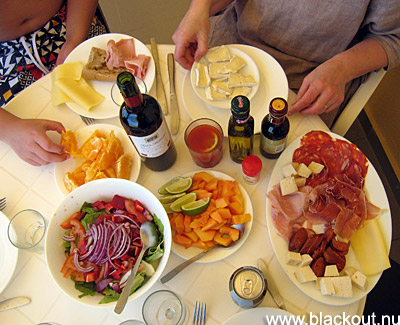 More peaks seen on the balcony! The food experience at the Canary
Islands could be half the trips worth! This is a typical lunch when we
decided to be lazy and stay at home. Then we did our own shopping
at the local store. Let med recommend the local oranges...
and papayas...and... 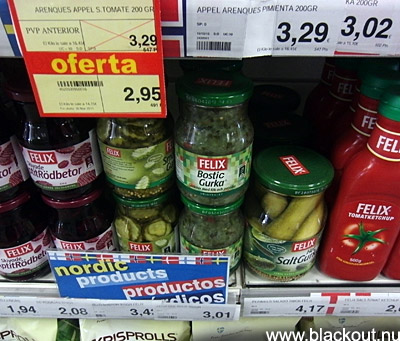 As you can see they have nordic specialities in the stores here to
appease the wrath of the nordic people! Like the Felix tomato ketchup
which probably is made of Spanish tomatoes (?) in Sweden and then
shipped back here. Not that sustainable idea nowadays. 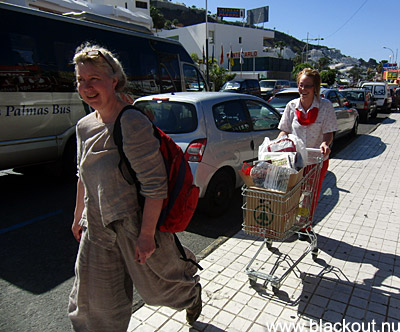 A service we've not seen in Sweden since...never! Store staff take
your stuff in the stroller and follow you to your car! This girl in Puerto
Rico was from Spar which is a Norwegian store chain! 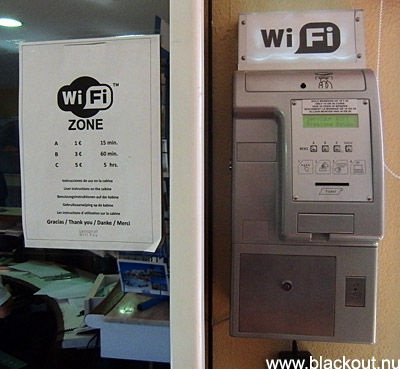 While the rest of the hotel world is towards offering their guests free
internet, the "Canarians" are showing this analogue solution! You
put Euro coins in the machine and it prints your code and password.
Expensive and boring! 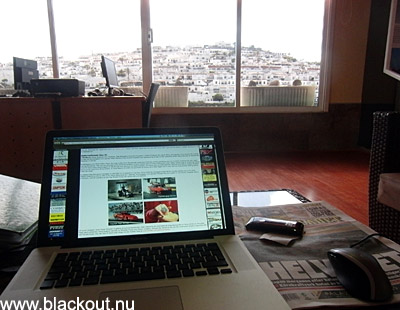 Vacation yes yes yes! But the first weekend I had to slave under
Eurodragster and other drag racing sites since the Gatornationals
was on in Gainesville, Florida with Swede "Gullan" Gullqvist in Pro
Mod and Leander Brothers in Top Alcohol Funny Car, and other
European drivers, but it was overthrown over the growing chaos
in the world - earth quake outside Japan and the uprise of the
people of Libya! After that...vacation could start... 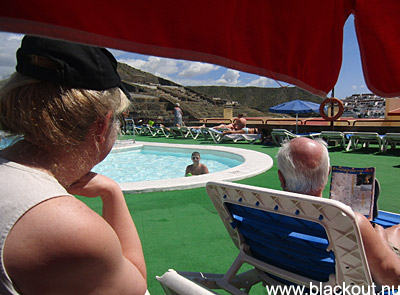 One of the meanings of vacations, a pool for the dolphins like Axel
and distance top less sightings for the men. Sun tan for the women.
;-) 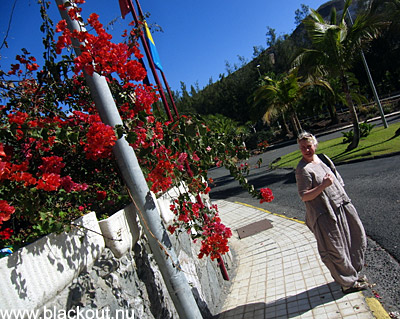 Another meaning of a winter vacation is to enjoy flowers of all colors.
Red bougainvillea is beautiful. 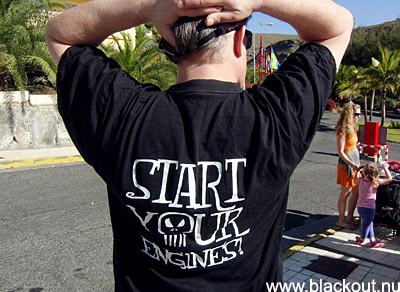 More meaning: you are getting more and more strength by the hour
in the warm sun. 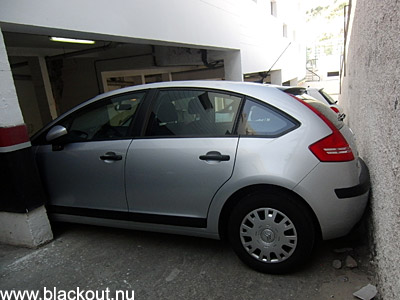 After a while it can be a good idea to rent a car and leave the hotel
for new adventures around the island. This is how Avis was parking
our Citroen C4. (Tip: take photos of car when you fetch it to be safe,
if they get any idea that you might have damaged it...) 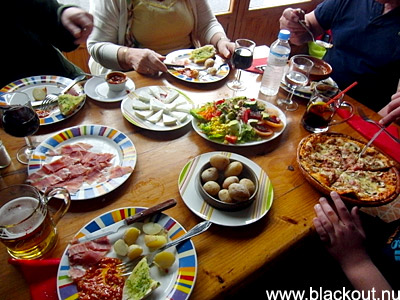 When up in the montains, order a tapas lunch in a small village! This
is not only the meaning of a vacation, it's the meaning of Life! Note
one of their specialities in the middle, small Canary potatoes boiled
very salty to dip in their Mojo sauce... 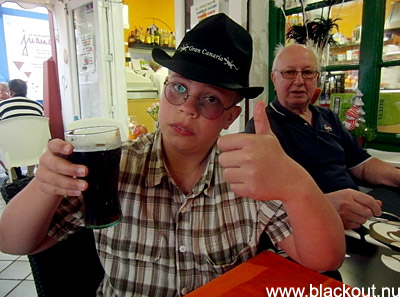 As long as I get Coca Cola says Axel who also found a hat he loved. 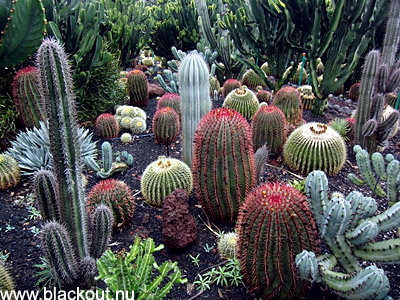 On the road, a Cactus Farm! Wow! 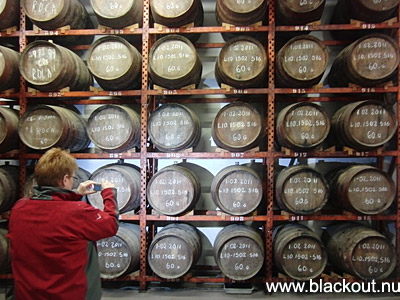 On the very north of the Gran Canaria we visited the liquor factory
Destilerías Arehucas S.A. and this tourist touring German lady was
always in the way of me when I took photos, so I stole her flash! 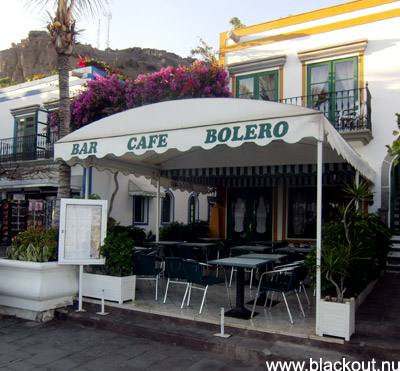 Another bar in my chain. 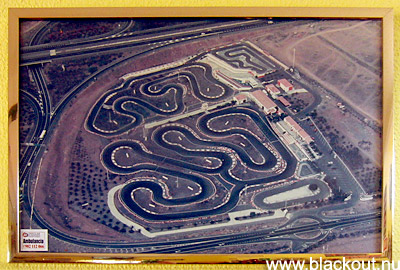 We also visited the "longest go-kart track in the world" (lower) and
yes, it took me a little more than a minute a lap! 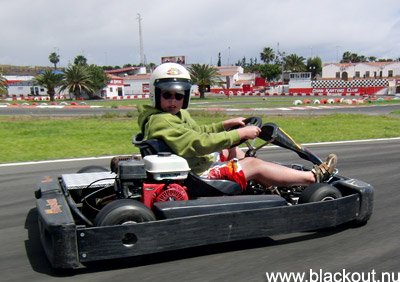 Axel hated his kid's kart which needed 90 seconds a lap. And we
couldn't persuade the staff to give him a large one, due to their
insurances. 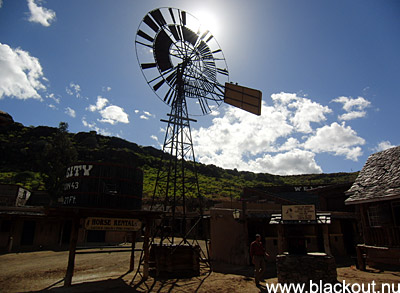 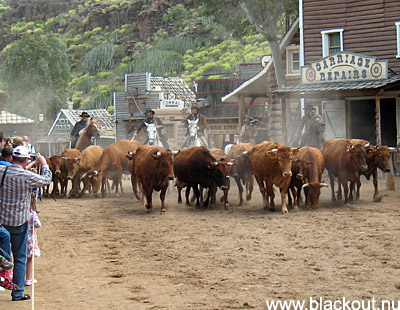 Cattle was driven though town by cowboys! 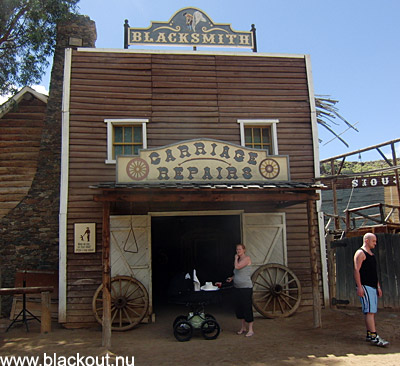 Sorry ma'm, but I don't think it's this carriage they mean... 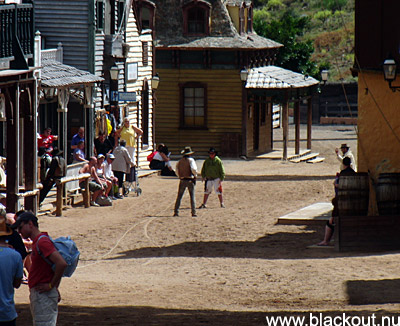 Suddenly Axel was drawn into a shootout and I discovered it all the
way from the church so I couldn't help him! And he had no chance... 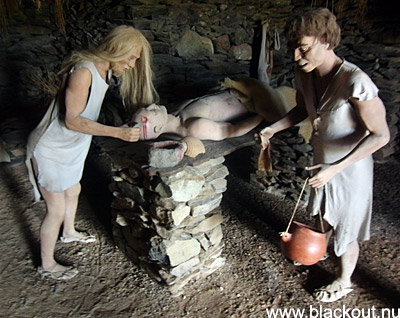 A simple Faycan trepanation in the cottage hospital...
Most intesting of the vacation was the day when we visited the
outdoors museum of the Guanches who were the aboriginal inhabitant
of the Canary Islands before the dreadful Spanish killed them off in
the 1400's! The Guanches were most likely from North Africa (Berber)
mixed with European Cro Magnon. And some have said they might
have been the first vikings since many of them seemed to have been
blonde and with big blue eyes! Very interesting! 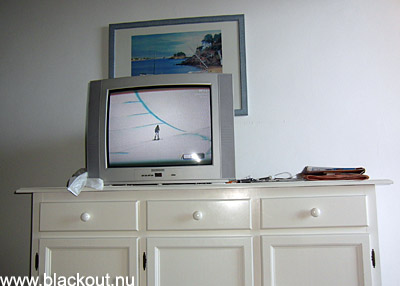 When I struggled to get this simple picture I remember I thought:
"Fever TV". Because all of us got completely done of Norovirus after
half our vaction week! We didn't leave our rooms! And since it was a
"Norwegian hotel" the TV-channels were all Norweigian and Spanish
and there were NO news channels, no CNN, no BBC...
So all the miserable things in the world were reported in happy
Norwegian mixed with never ending Norwegian winter sport reports
and interviews! It was truly a Fever TV! And we were happy to fly
home to Sweden again. To rest.