Take a stroll down the Memory Lane

My violent me. Cowboy, Batman, Judo and Bowman are just examples. But I was always fighting
on the good side. And nothing unusual for a young boy... 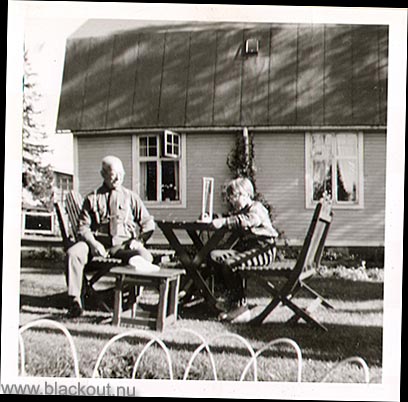 However, a fully functional scale guillotine made in school is a warning
sign? Here I'm telling my Grandad Eric in Härnösand how it works.

Saved by the sport 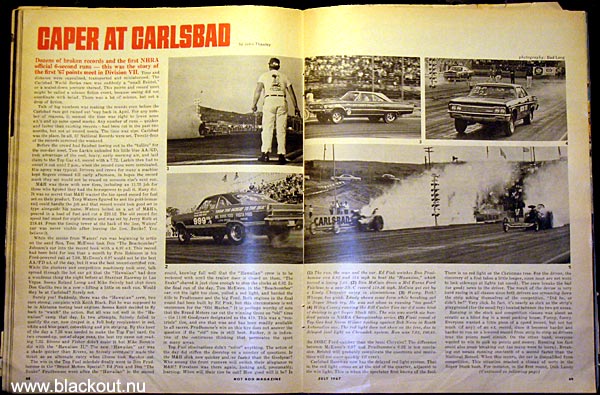 What are they doing? Smoke from the rear tires? Wow... These pictures did it for me!
"The first NHRA official 6-second runs..." It was all greek to me. 6 seconds...where? I started to look
for Hot Rod Magazine and began to recognize names like Don "The Snake" Prudhomme,
Don Garlits, Tom McEwen..." And I began to take special interest in the English lessons at school. 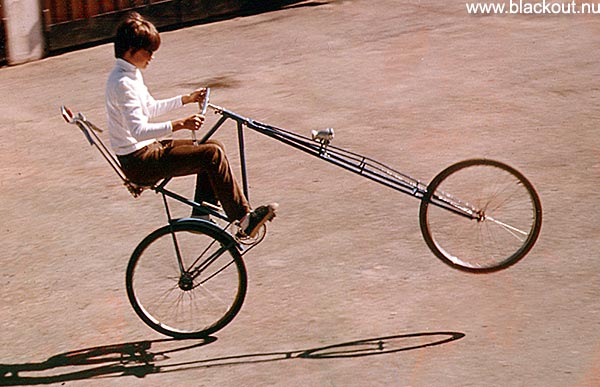 A chopper I made for easy wheelies! It was great to make something in a useable scale after all the
plastic model bikes and cars. And to make something with your own hands, this was actually my first
weld job! In school. With brazing technique. But in Umeå in the late 60's, even motorcycle choppers
weren't around yet, so surely a lot of heads were shaking at my strange creation. 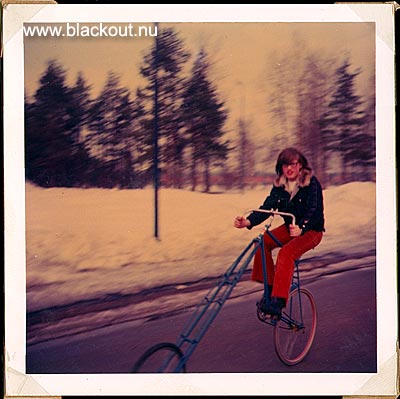 My friends were more envious for these corduroy (Manchester)
trousers, the first V-jeans on the block! My dear mother bought them
for me at Tempo downtown without even knowing about the unfolding
V-hype. Even I had no idea about it first. And it was the first (and
only) time I was in the cutting edge of fashion. 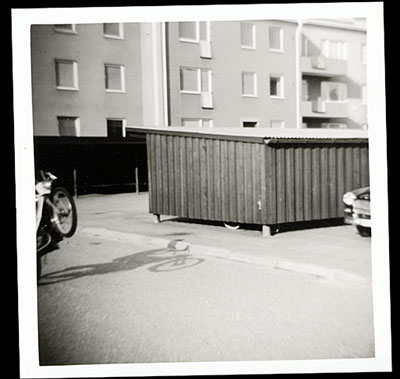 The proof that I could've been a hard biker as well! 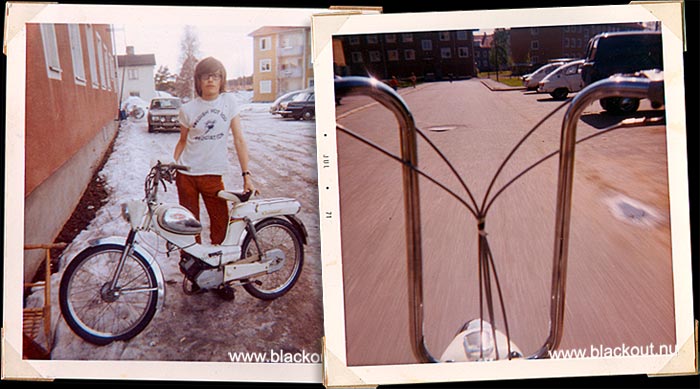 April 9 1971 was a date I'll never forget. The day I got my moped from my brother Björn who bought it used. It was a
Swedish 1965 Crescent, more known as "Raketarsle" / "Rocket Ass" because of its design. I was still 14 and the
legal age for mopeds is 15, but it didn't stop me from starting experiment. Apehanger handlebars to begin with. 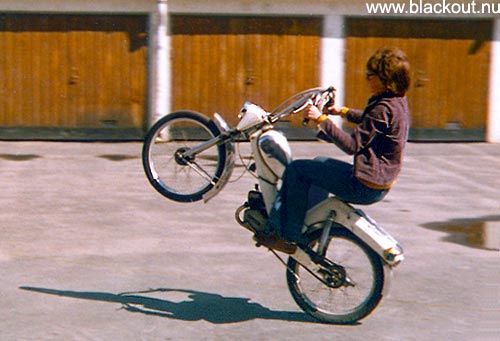 Most important was to balance long wheelies (as for the pedal bike). Engine was a
1 HP 50 cc Husqvarna (weak on low RPM) so very soon I had a 9 hp-cylinder mounted
which made wheelies possible just by turning on the power. However, after a severe
crash which drenched my blood in gasoline I thought things over. Hm...chopper?

Then the moped went through many different styles and became more of a chopper than a wheelstander. 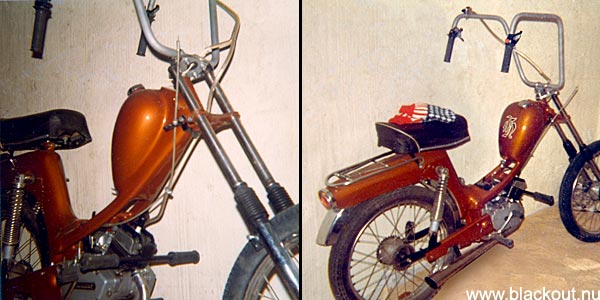 Finally I had molded the drop-tank to the frame, forwarded foot-pegs, extended front fork and an exclusive
own design six bend handlebars which my brother Björn had the absolute hi-tech SAAB-factory tech
shop in Trollhättan make for me! And a lot more. 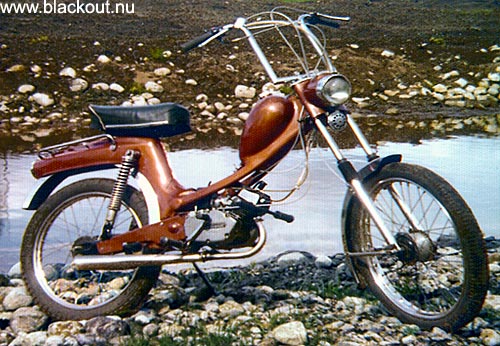 Final version, just days before I sold it to a girl (her daddy didn't like it, but had to pay!)

I also had a couple of years as a custom painter - when not in school! Lelle Järvenby was a happy customer and one of my
best friends in the early 70's. He had this Willys Overland EPA-tractor (has nothing to do with environmental things). When
16 years old in Sweden you're allowed to drive these slow farming machines. The Law says they must not go faster than
30 kmh - 19 mph. (BWAHAAAAAA!) As you can see we used oil on street to be able to do some serious burnouts. Jeez... 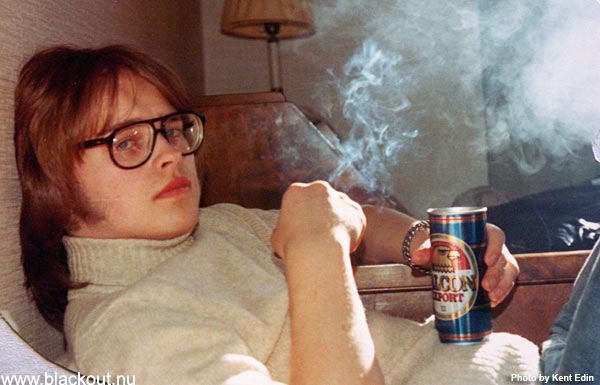 We drank beer and smoked cigarettes when not around mopeds and cars. No drugs whatsoever, never!
I guess this picture from buddy Kent Edin is from 1972. Interesting hairstyle...

More from Kent Edin's album. When Kent was only 17 years old he bought a Mustang and DROVE it
too! (18 is legal!). No worries back then. Newspaper headline says that "Kent drives on!" and "Kent will
win the World Championship in 1973 and 1974" and was of course borrowed from legendary Swedish
road racing ace Kent Andersson - who sadly passed away in 2006. 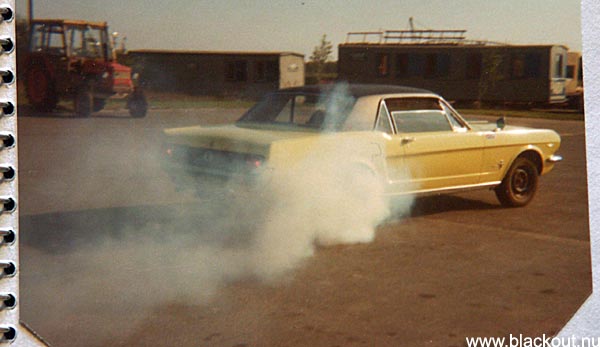 When Kent came by and proudly showed off his Mustang for the first time I jumped in and showed
him how to do a burnout. And it worked! On rear right anyway. Kent was stunned but wondered of
course why to do such an act!? And he was instantly worried about the tire and the cost of it, he
told me now. But, he was hooked to this for life! 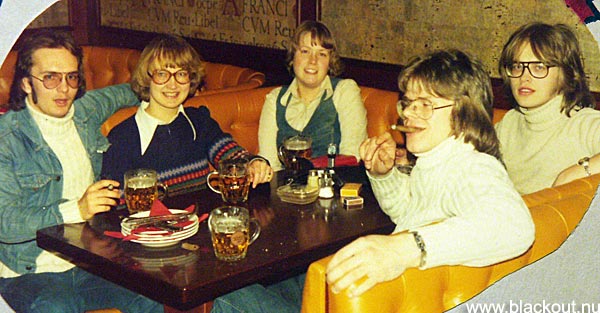 And we went by bus all the way to Stockholm to visit Hot Rod Show in February. This trip was arranged
by Umeå's local chapter of SHRA -Swedish Hot Rod Association. From left Kent, my sister Inger, my
girlfriend Lena Marklund, our buddy Per "Sicke" Wiklund and me. (I'll be back with pics from the show) 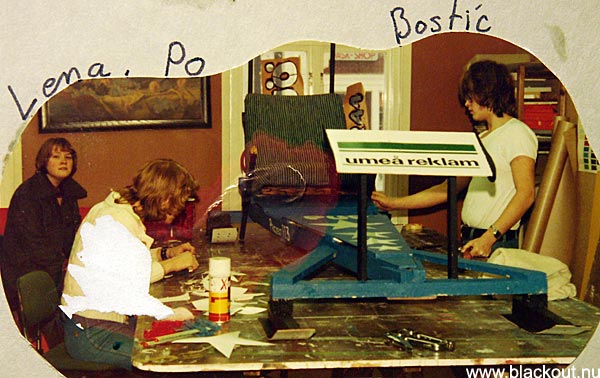 SHRA also had other winter activities, like drag racing down ski slopes with home built...things! Actually
no one ever died! Here we're building a dragster at the sign-making firm I was working for at the time. 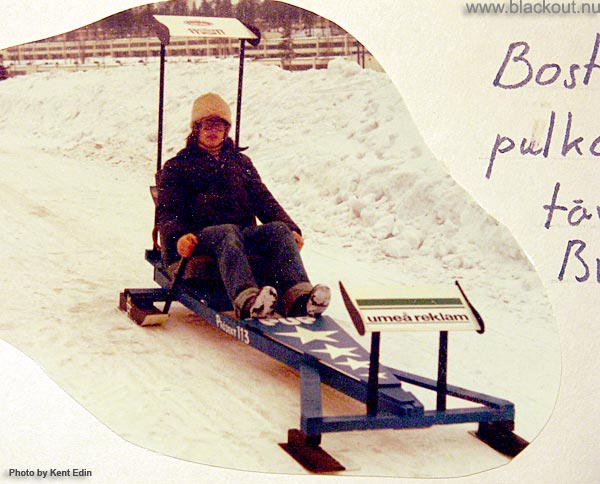 Wooden dragster PUP (or Project 113) was built around one of my mother's 50's chairs, which never
came back to the home again...Note the intelligent steering by braking with two of the chair's legs.
Actually, I was only the constructor, and brave (easily manipulated) Kent Edin was the driver!
Lucky 70's! No, we lost to an empty 50 gallon barrel on skis...before PUP broke into pieces. 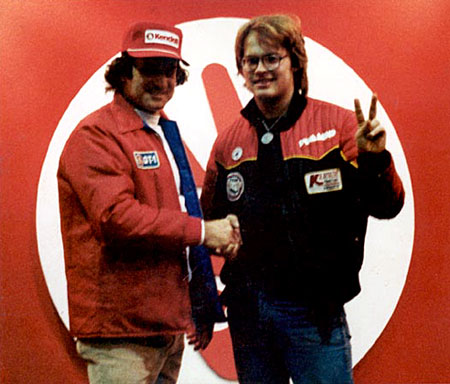 Raise your hand if you know who the man to the left is! I guess it was in 1979
when Don Garlits visited Sweden to promote Kendall Oil for Bruno Donati of
Ital American Motor. A friend and I made the long travel to Stockholm to
shake the hand of the legend which he already was at that time. And I had
read about the man in Hot Rod Magazine for years. I knew everything.
I remember he said he liked my jacket and my 1897 silver dollar around my
neck... ...hey, where is it now? Hm...?
I've met him several times later in my profession as an automotive journalist.
For you that didn't raise your hand - search the name "Garlits" on Google...

Summer night in Umeå in the early 80's. My Camaro wasn't ready...so...my Opel Kadett '62 takes the start vs. "Loppan's"
nice Dodge Dart. Better be racing whatever, than watching. 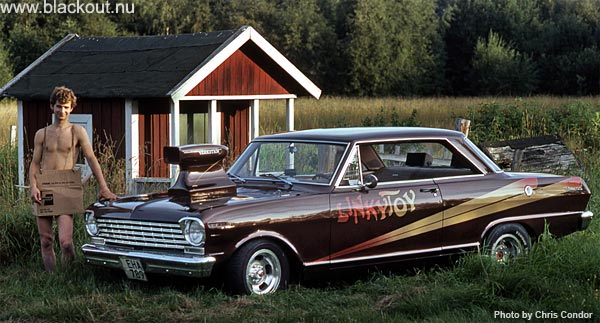 One of my friends back in those street racing years in Umeå was Stefan "Linkan" Lindqvist, "who put
EVERYTHING into his Turbocharged/Nitrous injected Nova streetracer" which Condor and I illustrated
in the Bilsport Magazine by showing his clothes and home in this picture... When working with Bilsport
in the years 1980 to 1988 I met about "every" street racer and drag racer in Sweden, and many abroad.
But Linkan still makes me laugh. 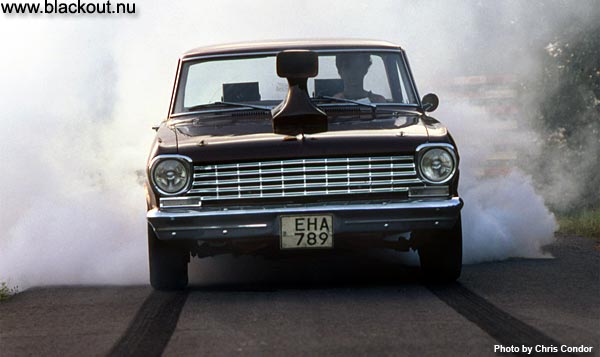 Linkan still is my friend but we meet too seldom today. And he still has the Nova even if he is racing
in a alcohol altered in Comp Eliminator nowadays chasing the 300 kmh trap speed. 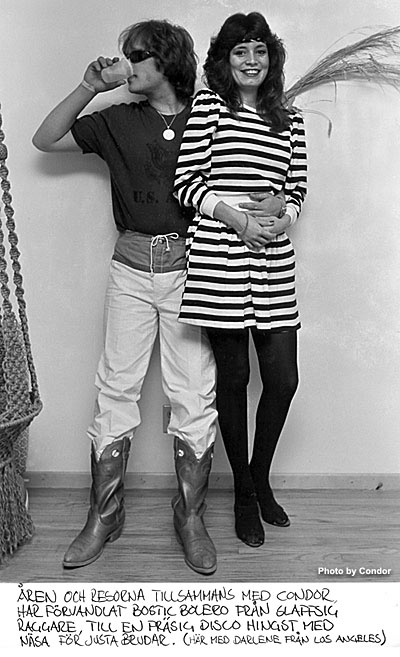 Just tried to stir things up in local phone book, to get laughs and reactions. And it worked! The phony
number for "summer home in Los Angeles" got greedy local tax-people to call and ask me about it! 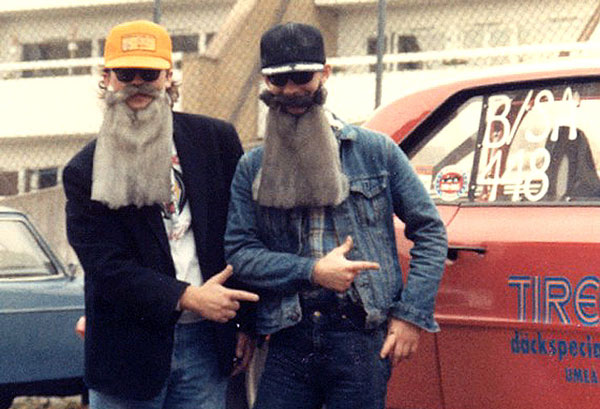 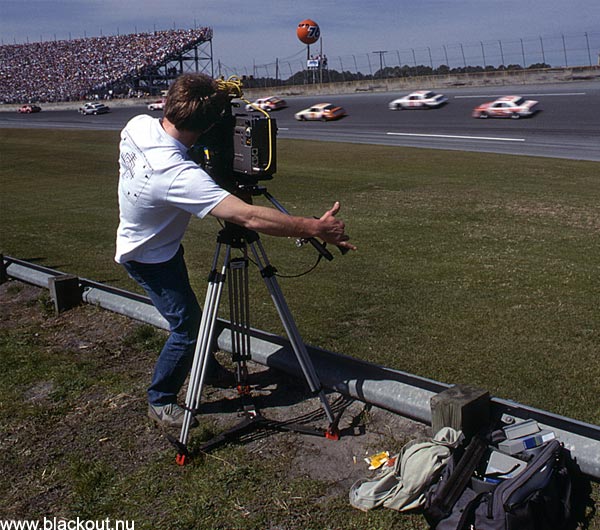 Chris Condor - A master videographer in action! Co-owner and still in front of the filming evolution at
Dockhouse Film & TV in Gothenburg where I work with him and his crazy ideas every day!
I took this picture at Turn Four at Daytona 500 in 1987 and we had just converted to film from making
articles in the one and only Bilsport Magazine. I promise to find this clip he filmed this day and present
it here. No music, only the SOUND of the freight train! 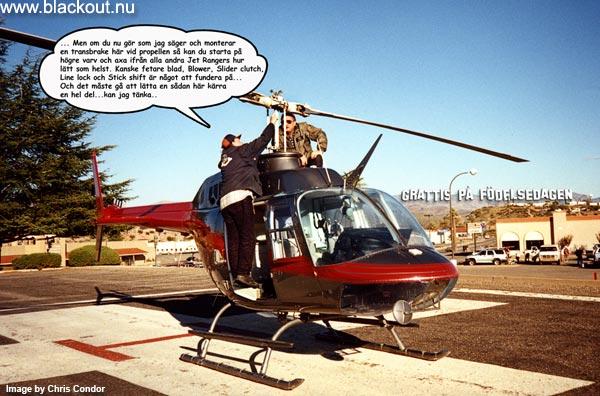 1997. Involved in a discussion with former US Army helicopter pilot Jim McPhail on a film job in
California for Volvo Cars. Condor made the speach bubble that says:
"...Now if you do like I say and mount a transbrake here at the propeller, then you can start at
a higher RPM and accelerate away easily from all other Jet Rangers. Maybe wider blades,
Blower, Slider clutch, Line lock and Stick shift are some things to consider... And it must be
possible to lighten a ride like this a whole deal...I presume..."

Click bar above if you you want to see more of my Whiplash Camaro project.