A season opening pro test weekend at the best dragstrip in Scandinavia. 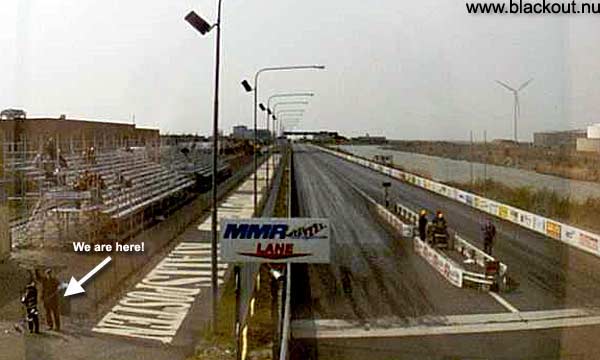 Axel and I were only spectators even if it wasn't a spectator event. We couldn't resist calling home to
Agneta and tell her to take a look at the organizers SRIF's website www.srif.se and click on
"Live Cam" so she could see us waving to her! Childish? You bet. Check for yourself, a new picture
every 4 seconds. At a test weekend there can be a long wait between rounds in that single lane. 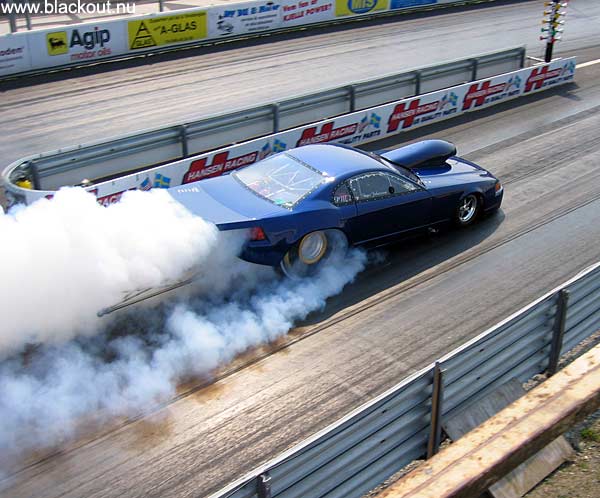 PM 2 Roger Johansson showed up in his new Ford Mustang! Wow what a beauty! Keep it like
that Roger! No stickers, no nothing...only that wonderful blue paint! 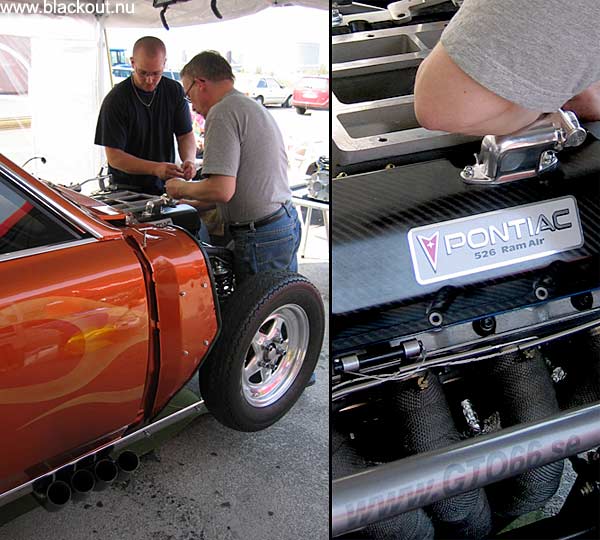 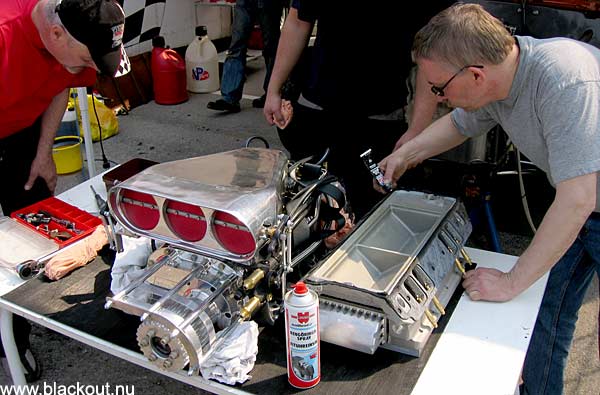 This car was voted in "Top Ten Cars in the World" by Hot Rod Magazine! And this time Alf is going
absolutely monstrous! He's now running an all-out alky! We believe this engine is coming from the
Top Doorslammer/Pro Mod team Ol' Fiftyone!
Alf, there's place for a 1966 Pontiac GTO in the Pro Mod pit area... 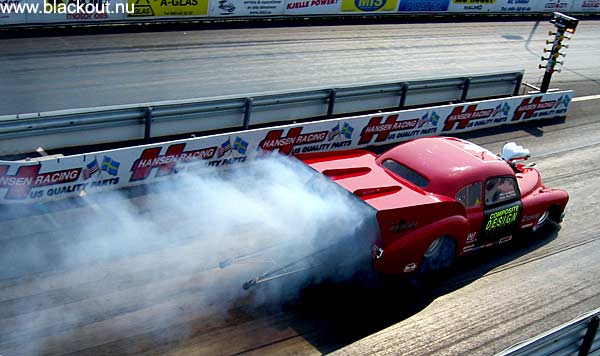 Team Ol' Fiftyone (Chevy business coupe) tested their new set up, and new driver - much experienced
and skillful Niclas Andersson. Got 1.01 and 1.03 on the 60 foot and then lifted. (Pro Mod legal). 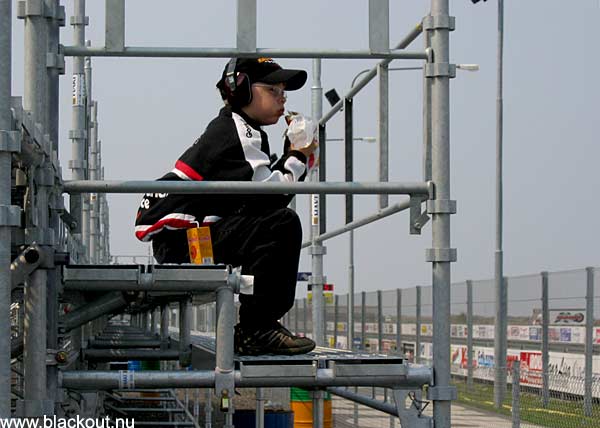 What a day for an 8 year old! Both drag racing and a hamburger! 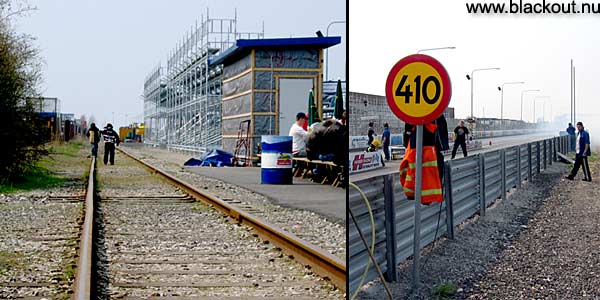 When the action was low on the drag strip, an abandoned rail track came in handy to play at with
new friends. Speed limit sign is in kilometer per hour - 254 mph. 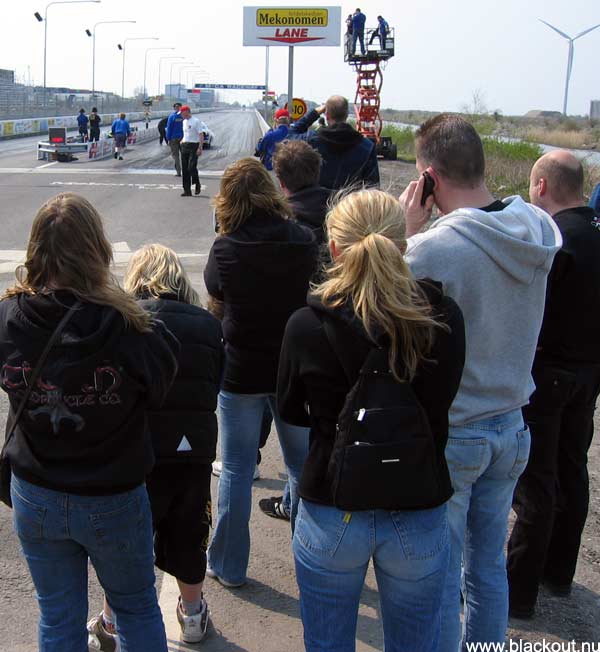 The spectators were from the teams. Check that lift in the background, a service to the photographers
from the organizers! But Axel thought it was all for him! Thanks SRIF for the good thinking! 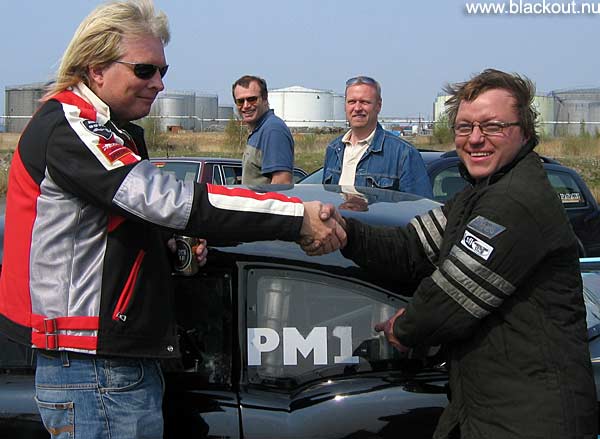 Patrick Wikström and mechanic Ulf "Goofy" had a lazy day in the sunshine, happy to meet all friends
again after the looong winter. Patrick even rented out his hardly earned numbers PM1 to the team
"twins" Magnus and Mikael Lindahl. 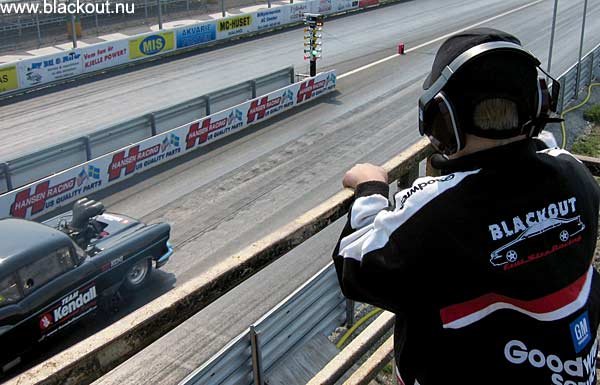 Patrick was happy to see this! Top Doorslammer Team Outlaw/Aki Motorsport's owner operator Micke
Nord makes this ex-Patrick Wikström Nova go faster than ever! A 4.02 @ 176 mph (284 kmh) makes
this the quickest doorslammer in Europe! At least over the eight mile. Congratulations Micke and crew! 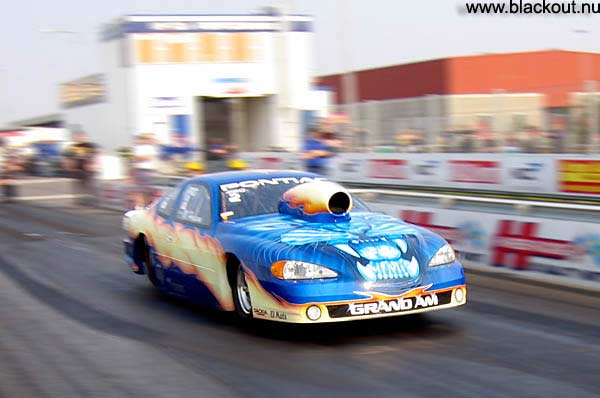 FIA European Pro Stock PS2 Magnus Hansson was also there and tuned. And this must have
been the long distance winner if they had one. Magnus is from Umeå in northern Sweden. 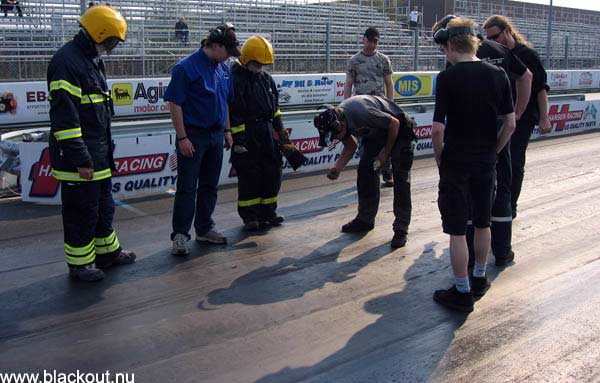 What makes this the best drag strip in Scandinavia even if it's only an eight mile track? Well, it's all
the rest of it! First off, it's a permanent track, open EVERY wednesday night for streetracers who can
drive as much as they want all evening for pocket money. There are good spectator stands. There's
a good kitchen with Hot Rod Deluxe or Top Fuel burgers and more! But most of all it's the track itself!
Perfectly flat of course. They nurse it so carefully and it is so perfectly built and prepared that EVERY
driver we've talked to says it the best track of them all - on par with Santa Pod.
I hope to be back soon, with the SS...